Ravichandran Ashwin and Ravindra Jadeja made full use of the pitch.

Chennai Super Kings (CSK) completely outplayed Kings XI Punjab (KXIP) in Match 24 of the Indian Premier League (IPL) 2015 at Chennai. They posted a big total on board and then ran through the Punjab batting line-up to win by 97 runs. Nikhil Popat brings the highlights from the game.

Chennai go hard at the top: CSK openers are known for their big hitting and they started with a bang racing away to 50 in only 27 balls. Both Brendon McCullum went after the KXIP bowlers, right from the word go. Dwayne Smith though was the first one to be dismissed when he was bowled trying to clip one off his pads, he departed for an aggressive 26 in 13 balls but CSK had got the start they wanted by then. CRICKET UPDATES AND COMMENTARY: CSK vs KXIP IPL 2015 Match 24

Brendon McCullum’s blitzkrieg: When the opposition is going hard, you ought to take your chances but Mitchell Johnson was very generous when he dropped McCullum, who was on 21 then. The Kiwi skipper made KXIP pay as he went onto score a quick fifty. And by the time McCullum holed out to long off, he had already scored 66 in 44 balls, hitting eight fours and three sixes in his knock. CRICKET SCORECARD: Chennai Super Kings vs Kings XI Punjab IPL 2015 match

Mitchell Johnson’s tough day out: Having dropped McCullum already, Johnson would have been expecting to make amends but he dropped Suresh Raina too when the latter was on 13. Though Raina failed to get going and it did not cost them many. With the ball, he bowled decent three overs but conceded as many as 17 runs in his final over to finish with figures of none for 40 in his four overs. A truly bad day in the office for him and his team. IPL 2015: Schedule with venue details

Murali Vijay, lone man standing: Chasing a score of 193, KXIP needed a good start but CSK kept taking wickets in the Powerplay. Murali Vijay, playing against his former IPL team, was playing really well. He hit few lovely hits to the fence to get going. And just when he was starting to go big he flicked one straight to Dwayne Bravo at mid-wicket which reduced KXIP to 55 for five and sealed the game for them. He was out for a knock of 34 runs in 32 balls. IPL 2015: Points Table and Team Standings

Spin duo rout Kings XI Punjab: On a pitch which had slight turn to offer, Chennai Super Kings spinners, Ravichandran Ashwin and Ravindra Jadeja made full use of the pitch. They were not afraid to toss the ball up and got purchase off the surface and reaped rich rewards. Both of them combined to take five for 36 in eight overs; which just broke the back of Kings XI Punjab as Chennai ended up winning the game by 97 runs. Indian Premier League (IPL) 2015: Complete coverage 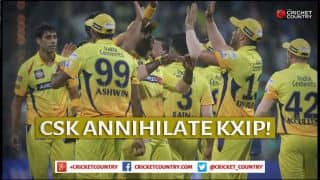 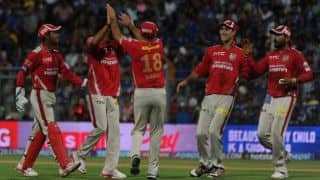