Here's a look at what some teams need to achieve in order to qualify for the semi-finals of Champions League T20 2014.

With just five matches left in the Champions League T20 2014 (CLT20), Group B still has one semi-final slot open while in Group A it is race between Chennai Super Kings (CSK) and Lahore Lions. Abhijit Banare gives a brief overview of who are the front-runners for the last four spots.

Kolkata Knight Riders (KKR) have already qualified for the semi-finals. They are unbeaten so far with another inconsequential match against Dolphins remaining.

Chennai Super Kings: They have achieved the first task of staying alive in the tournament moving to 10 points defeating Perth Scorchers and holding on to their second spot with a net run-rate of +0.945. They would hope that Lahore Lions lose to Perth Scorchers giving them an easy way in to the last four or else the net run-rate issue emerges again mentioned below.

Lahore Lions: It would have been a much easier affair for Lahore if they had finished off the Dolphins innings and notched a big win to move ahead of CSK on net run-rate. However, they are still in with a chance if they manage to inflict a big defeat on Perth Scorchers. Lions are currently on +0.255. As mentioned in the below tweet by statistician Mohandas Mennon: Lahore need to beat Perth by 47 runs or with 33 balls to spare in order to better CSK’s current net run-rate.

Lahore Lions need to beat Perth Scorchers by 47 runs or by 33 balls to spare to better CSK’s current NRR of 0.945 #PERvCSK #CLT20

Perth Scorchers: They are out of the tournament with this loss. CSK are on 10 points and Perth can attain a maximum of eight by beating Lahore. And a win in their last match would mean even Lahore are out of the semi-final fray, thereby giving CSK a safe passage.

Dolphins: They were knocked out of the tournament by Lahore Lions in their 16-run loss. However, Dolphins did land a big punch while going down. Robbie Frylinck’s blitz reduced Lahore’s huge margin of victory.

Hobart Hurricanes: The only team in Group B which has a fairly uncomplicated situation right now. They face Barbados Tridents today. All they need is a win and they seal the semi-final spot along with Kings XI Punjab, thereby crushing any kind of hope for the rest of the teams. However, if Hurricanes lose, they not only hang in balance but also keep Tridents’ hopes alive. The equation for the West Indian franchise is mentioned below. The positive for Hurricanes is that they have a healthy net run-rate thanks to their high-scoring win over Northern Knights. Stuck on the table with eight points would still make Hurricanes the frontrunners.

Barbados Tridents: The equation for Hurricanes is uncomplicated in a positive sense, but for Tridents it’s the other way round. They have started the CLT20 2014 campaign with two consecutive losses. This leaves them with no option but to win the remaining two. With a bitter experience in their last match, they would hope they don’t drag things to another Super Over searching for a victory! But the Tridents hold an advantage despite being at the bottom of the points table. A win against Hurricanes will allow them to know the exact margin of victory required when they face Northern Knights in the last match of the entire CLT20 2014 league phase. Of course they would hope that the margin is fairly gettable rather than going in to the match requiring an unimaginable victory margin.

Northern Knights: Their hopes are all but dusted. They play their final match of the league against Tridents. But such has been their margin of losses (86 runs against Hurricanes and 120 against KXIP) that it is extremely unlikely that they will catch up on net run-rate even if they inflict a similar humiliation over the Tridents.

Cape Cobras: The Cobras take on an in-form KXIP at Mohali tonight. On a pitch where the home side has looked unbeatable, the Cobras will have to win handsomely. However, none of that hard work would be sufficient if Tridents lose to Hurricanes in the match to be played a few hours before them. If Tridents win, then the Cobras will be aware of the margin of victory required to pip Hurricanes in the points table. However, it is not as easy as it sounds. Hurricanes are +1.292 while Cobras are languishing at -0.065. 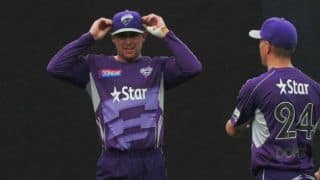