A look at some of the stats highlights for Pakistan at the World Cup since its inception in 1975.

The ICC Cricket World Cup 2019 gets underway from May 30, with ten teams vying for the coveted ODI championship.

Pakistan – who in England in 2017 won the ICC Champions Trophy – will be led by Sarfraz Khan for the first time at the World Cup.

As part our of series looking at the history of each time at the World Cup, today we revisit Pakistan s past performances and key players from 1975 to 2015.

Miandad’s eight fifties are a record for Pakistan at the tournament. Majid Khan scored five half-centuries.

Anwar and Rameez Raja hold the record for most centuries by a Pakistan batsman at World Cups – three.

Not surprisingly, Shahid Afridi has hit the most sixes for Pakistan at the World Cup – 12. After him, Wasim Akram‘s 11 are the next best.

The Pakistan record for most runs in a single World Cup belongs to Miandad who in 1992 scored 437 runs at 62.60 from nine innings.

Imran Nazir holds the record for Pakistan’s highest score in a World Cup – 160 versus Zimbabwe in 2007.

Miandad played the most World Cups for Pakistan – six. He was part of the squads from 1975 to 1996, when he retired.

Wasim is followed by Imran Khan (34) and Afridi and Shoaib Akhtar with 30 wickets in a single tournament.

Afridi is the holder of the best innings bowling by a Pakistan player at any World Cup. In 2011, he claimed 5/16.

For non-wicketkeepers, Inzamam’s 16 catches in 35 games is the most by a Pakistan fielder.

The highest partnership by a Pakistan pair at the World Cup is 184 between Anwar and Wajahatullah Wasti against New Zealand in the 1999 semi-final at Old Trafford.

As a side, Pakistan’s biggest World Cup win came over Kenya in 2011 when they beat them by 205 runs. 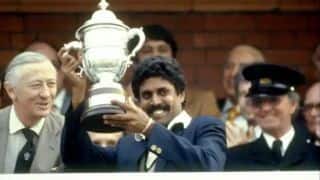