Until this win over England, they had not played one near-perfect game in the World Cup.

LONDON: Literally two minutes after Marcus Stoinis cupped the catch that ended match 32 of the ICC Cricket World Cup 2019, while the refrain from perhaps the most well-known Australian song around the world, ‘Down Under’, played out across the PA system at the most iconic cricket ground in the world, the sun burst through the clouds and illuminated the field.

All through Tuesday at Lord’s, the sun had hid shyly – or maybe watched from behind the canopy of clouds – from the drama that unfolded across 94.4 overs of intense cricket between the two oldest rivals that cricket has.

The top-ranked team in ODI cricket, tipped widely to lift the World Cup this year, for the first time in the tournament’s history, were beaten by 64 runs. Their third loss in seven matches. Their first, back to back, since January 2017. Eoin Morgan‘s team now needs to beat one of India and New Zealand to reach the semi-finals, at the least, and hope that Pakistan lost their remaining three matches.

What a difference a week makes. This time last week, England were second on the points table. Then they lost to Sri Lanka in the upset of the tournament, to leave themselves needing to win two of three games. This time last week, Australia were competitive, but not entirely convincing even while having lost only one of five matches.

They had beaten Afghanistan by seven wickets, West Indies by 15 runs, lost to India by 36 runs, defeated Pakistan by 41 runs and Sri Lanka by 87 runs. They looked a transformed side from the one that slipped to sixth in the ODI rankings earlier this year, clearly a tougher outfit with David Warner, Steve Smith and Mitchell Starc back. This is a team that historically ups its game in World Cups, but even with four wins there had not been one definitive Australian victory.

Step up, England. In one of the tournament’s marquee matches, at the hallowed Lord’s cricket ground, in front of a near-full house which included a bevy of celebrities and sporting icons, Australia smashed England. Favourites England, top-ranked England.

They won because they out-bowled and out-batted England. More so the out-bowling bit, in particular during the first 15 overs.

Should Morgan have opted to bat? In hindsight, yes. Batting first worked for Australia. Initially, their openers Aaron Finch and Warner were made to work hard for their runs as Chris Woakes and Jofra Archer found appreciable seam movement and deviation on a slightly green-tinged surface, but one very similar to the strip on which Pakistan’s opener put on 81 inside 15 overs two days ago at Lord’s.

Finch edged the second ball of the game, from Woakes, past slips for four. Archer beat Finch’s edge by a dog’s hair, then got a leading edge that flew past gully for a single. Warner sliced over point for two. He left a ball from Woakes that tip-toed over the bails. On 6, Finch drove hard at Archer and saw the ball dropped by James Vince at point, leaping up and getting a hand on it but unable to hold on. A tough chance for Vince, the ball hit hard and travelling rapidly upwards of him.

Warner pulled Archer for four, Finch did the same to Woakes. They were battling, Finch and Warner.

Woakes rapped Finch’s pads with an in-cutter, belted out an appeal. England reviewed. Height was the issue, the umpire’s call stood. Then, the ball of the morning. Pitched up fuller, on a teasing length, hitting the upright seam, putting instant doubt in Warner’s mind. He poked at it, and was left frozen as the ball curved past his edge and brushed his pad.

The initial hard yards scrapped through, Warner and Finch waded into England’s attack. Warner smacked 53 from 61 balls, Finch collected 100 from 116, his second century of this World Cup. A bit part of the battle was won by the Warner-Finch stand, and then in Finch smoothing over the loss of Usman Khawaja. The next best was 38 each to Smith and Alex Carey, small but vital innings that helped Australia get to 285/7. You reckoned they were at least 35 runs short, given the stand that Warner and Finch had set down.

On the day, it proved match-winning because of how superbly Australia’s bowlers operated. And herein lies the real threat that this team carries: the ability to get match-winning performances from support players.

This was a pitch made for Jason Behrendorff. A little bit of movement, a bit sticky. His left-arm accurate pace accounted five England wickets, the first time in eight ODIs that he has managed as many. Ryan Harris, a superior pace bowler whose injury was curtailed by injury, grabbed five-wicket hauls for Australia in his second and third ODIs but ended his career with 44 scalps from 21 matches. Today Harris is Australia’s bowling coach, and can pass on vital information to Behrendorff about how to prolong his career.

This was Behrendorff’s second match of the World Cup. Against Sri Lanka at The Oval, he came on first change. He bowled nine overs for 59 runs and took the wicket of Lahiru Thirimanne. At Lord’s, drafted in place of Nathan Coulter-Nile, Behrendorff was asked to open the bowling. Second ball, Vince was bowled for 0 by a big swinging delivery he never saw coming.

Behrendorff had knocked on the door, Starc kicked it down. Starc did what Starc does. He hustled, he hurried, he bounced and he yorked. Joe Root was set up with two driving-length balls and then pinned lbw by a viscious in-swinger. No doubt about that one, off you go, Joe. Morgan was made to hop away from the line of the ball, then duped into pulling a top-edge to Pat Cummins at fine leg. Starc’s first spell of 3-1-12-2. had left England heaving.

Behrendorff was given a seventh over and got Jonny Bairstow caught at deep midwicket, undone by a bit of bounce. England 53/4. The collapse – mental and physical – was on.

Another reminder of Australia’s depth: Nathan Lyon, getting his first chance of the World Cup, bowled his first three overs for 14 runs. Teasing, tempting offspin.

Ben Stokes and Jos Buttler, the two men on whom England’s chances rested, put on a partnership. Australia missed a run-out to let off Buttler. Stoinis then put in his first telling contribution to the World Cup, having Buttler swinging out to Khawaja at deep midwicket for 25. It was the only impact Khawaja had on the game.

Just like Glenn Maxwell, who again disappointed with the bat but took a relay catch at the deep midwicket boundary, losing balance as the velocity of Chris Woakes’ shot pushed him over the edge, but coolly threw it back to Finch. It is for moments of brilliance in the field that Australia persist with men like Maxwell.

Another opening, and Finch called on Starc. The ball that ended Stokes’ resistance on 89 was one for the vault. Full, fast, tailing in. Timber. Stokes dropping his bat in agony while all around him English cricket fans dropped their hopes spoke volumes of that dismissal. The ball of the World Cup? Most certainly.

Back came Behrendorff to take out Moeen Ali, Woakes and Jofra Archer in a burst of 3/17 in three overs. The man, you could have been forgiven for thinking, was the weak link in this attack. Behrendorff and Starc took nine wickets for 87 runs in 18.4 overs. That is crushing stuff. Lethal. Australian.

Australia are the first team to reach the World Cup semi-finals, which speaks of the blueprint they have.

Three months ago, Finch’s team was in disarray. Speculation was rife as to how Warner and Smith could lift the team’s quality and belief. Starc and Josh Hazlewood were being rehabilitated, so there was obviously quality on the sidelines. Australia were beaten at home by India 2-1 in a closely contested ODI series. Then they went to India, won a short T20I series and dropped the first two ODIs. They needed to make history by winning the next three matches, and did precisely that.

That series win in India sparked their revival, which was backed by 5-0 over Pakistan – depleted, yes – in the UAE. And now here they are, top of the World Cup points table. Semi-finalists.

Australian teams lift their game at World Cups. They have won the most World Cups – five. In countries as diverse as India, England, the West Indies and Australia. And yet, until this win over England, they had not played one near-perfect game of cricket in this World Cup.

Like the sun bursting out from behind the clouds, this Australian cricket team is now shining its brilliance. Expect it to keep dazzling opponents until the World Cup final at Lord’s. 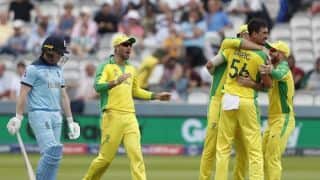