Like Andaz Apna Apna, this team could team could yet earn the tag of being a masterpiece.

LONDON: Like the cult Hindi comedy film Andaz Apna Apna, the current Australia cricket team is a dizzying and dazzling tour de force – at once all over the place and struggling to give everyone a seat at the table.

Straight up, there are the two openers David Warner and Aaron Finch, trying to out-do the other in the top-scorer’s table with fifties for fun. Who is better? Who played the feistier innings? Who’s luck will run out today? Who’s going to script the tastier subplot to The Great Australian Comeback – Warner, back in the team after a 12-month ban, or Finch, whose dramatic personal turnaround promises to be one of the greatest in Australian cricket history?

Then there’s Steve Smith – fidgety, rubbery Steve Smith – flashing his brilliance now and then but never quite hitting top gear. And never looking good at whatever he’s doing, even if its bowling an unorthodox brand of legspin/offspin that fetches him a wicket in his first bowling chance in ODIs since January 2016.

NEW ZEALAND VS AUSTRALIA SCORECARD | AS IT HAPPENED

Here and there, Usman Khawaja pops in to try and grab a slice of the fun but no matter what he does – 89 off 72 against Bangladesh, 88 from 129 against New Zealand – he is never able to get your attention, is often pointed to as the weak link in the batting and almost always seems destined for second billing. There’s Glenn Maxwell, he of the breezy cameos and haphazard batting but never able to properly dazzle, even when he’s parrying back relay catches from beyond the boundary.

There’s Alex Carey, having the most fun he’s ever had in an Australian jersey. Carey, tipped for greatness by Ricky Ponting and termed by Steve Waugh as “a hybrid of Michael Hussey and Michael Bevan”. Both men led Australia to World Cups, just a reminder. There’s Marcus Stoinis, who you constantly look at and wonder just what he’s been picked for. He’s the 1990s bits-and-pieces type of allrounder that doesn’t quite seem to fit into the narrative today.

There’s Mitchell Starc, of course, who just rolls up and bowls batsmen for fun with the accuracy of Glenn McGrath. There’s Pat Cummins, ridiculously skilled but who hasn’t made headlines yet this World Cup, even though Starc singled out his economy rate (4.66) as massive to where Australia are. There’s Jason Behrendorff, equally at ease taking five wickets at Lord’s as he is lying on the same outfield with his wife and toddler on an off day. There’s Nathan Coulter-Nile, poor with the ball but who scored the innings nobody saw coming in the win over West Indies.

The spin pair of Adam Zampa and Nathan Lyon are both nudging each other. Kane Richardson lurks, having earned a call-up when Jhye Richardson got injured. Shaun Marsh is also around, somewhere. Australia have played all 15 of their World Cup squad across the tournament, with each one tripping over the other in an attempt to make an impact and gain more playing time.

This maddening array of talent has helped Australia into the semi-finals without ever hitting top gear. It is both amazing and frightening.

In each match, good or bad, players have stood up. Sometimes in fits and starts, sometimes in a tidal wave of brilliance, sometimes in cameos and catches. Finch and Warner each have two hundreds. Smith has three half-centuries while only once looking like the genius he is. Khawaja has been shuffled up and down the order and is Australia’s third-highest run-getter. Maxwell has infuriated, as he often does, but remains vital to this team even if only for his fielding. Carey has been golden, with the bat and behind the stumps.

So much needs to be said about Starc, the tournament’s leading wicket-taker with 24. He’s been quick, he’s been accurate and he’s been very successful almost whenever he’s been called on.

It was Starc who shaped Australia’s win over West Indies earlier in the tournament, first returning to get Andre Russell in the 39th over and then Jason Holder and Carlos Brathwaite during the 46th en route to a five-wicket haul. Against Pakistan at Taunton, it was Starc’s extraction of Wahab Riaz for 45, followed by Mohammad Amir two balls later, that turned around a dangerous situation.

At The Oval, Sri Lanka had raced away in pursuit of a target of 335. Finch went back to his strike man, with Kusal Perera on 52 off 35 balls, and Starc struck immediately with a full ball on the stumps. A stand of 115 had been snapped in the 16th over. Later, Starc snuffed out Sri Lanka’s flame with two wickets in the 37th over.

Against New Zealand at Lord’s, Starc struck with the fourth ball of a second spell to get Kane Williamson feathering a catch to Carey on 40. In his third, he had the struggling Tom Latham caught brilliantly by Smith at midwicket, leaping to his right, then won an lbw shout off Ish Sodhi and found himself on a hat-trick when he bowled Lockie Ferguson. It wasn’t to be, but Starc fitting ended the match with a short ball to claim his second five-wicket haul of this World Cup.

That kind of consistency is rare, and a serious asset to this Australian team. It’s what helped the previous one win the World Cup four years ago, and what has helped this one into the semi-finals, now assured of a top-two finish after hammering New Zealand. It’s what could help win them a sixth World Cup title.

Having beaten England at Lord’s, Australia could have given Starc and Cummins a breather three days later against New Zealand. They did not, a clear indication that they aren’t about to take their foot off the gas. It was Finch and coach Justin Langer’s way of keeping Australia’s fringe players hungry too.

A few months ago, Carey was a fringe player. Today he’s the find of the tournament, having been chosen over Peter Handscomb as Australia’s designated wicketkeeper.

Carey has quietly been ticking away. His 244 runs have come at a strike-rate of 110.40 and mostly from crunch situations: 45 off 55 balls when Australia had lost half their side for 79 versus West Indies, 55* from 35 in the loss to India – the only one for Australia so far – to keep the chase alive, 38* off 27 against England to drag the score to 285/7 and now 71 off 72 balls against New Zealand to earn Carey his first Man-of-the-Match award.

When he came out to bat on Saturday, Australia were 92/5 and sinking. He played a blinder, dominating a century stand with Khawaja – when the 100th run was raised, all 11 of the fours in it were all Carey’s – and that took the game away, as Finch and Williamson admitted.It is that depth in batting that has kept Australia in their stride this World Cup.

When Andaz Apna Apna released in 1994, one of the reasons for its commercial failure was that its narrative was too ambitious and that it packed too much into every frame, with its superstar cast and various scene-stealing supporting actors and bit players often drowning out the other in a tailspin of talent and, at times, loudness. The audience simply didn’t know where to look when the screen was filled with six, nine and sometimes a dozen people in a single frame.

But years later, once released on VHS and DVD, the film etched its place in Hindi film history as a comedic masterpiece.

This Australian cricket team was assembled from the embers of disarray that burned low after the stirring 3-2 win in India and the 5-0 sweep of Pakistan, which came after Australia went over two years without a single bilateral ODI series win. Ranked No 6, it was widely written off a few months ago despite the impending return of Warner and Smith from their bans and Starc from injury. Now it stands as the team to beat this World Cup, having barnstormed into the semi-finals with each of its players vying for attention in a mad dash towards glory.

Like Andaz Apna Apna, this Australian cricket team could team could yet earn the tag of a masterpiece, from once being widely rejected. 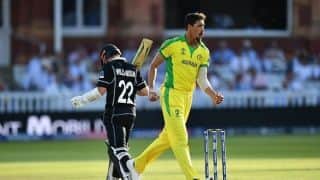