Ravindra Jadeja doesn t give up. He hasn t reached where he is by giving up.

MANCHESTER: Sport is mostly cruel. It will make you believe that the team you support is best in the fray. And why not it topped the league, and at halfway point in the semi-final, was proving to be the better side. Then, comes the turning point and leaves you flabbergasted.

So, ask yourself, how will you get over India s shock loss to New Zealand in the semi-finals of the ICC Cricket World Cup 2019? Will you cry to sleep for the next few nights, watching as one of the other three sides lift the trophy? Have you been drinking that extra bit to drown your sorrows? Have you told your boss that this will be a working Sunday for you and you will be reporting to office, staying as far away as possible while the final is on?

Ravindra Jadeja can do none of this. He can bat, and bowl, and field, though. After what happened last week, he didn t need to be told anything. He just wanted to go on the field and express himself, said Virat Kohli, talking about the online feud with commentator Sanjay Manjrekar.

Did that comment encourage team India to play Jadeja against Sri Lanka? No the dressing room might not have been happy about those comments during an on-going tournament, but it doesn t work like that. The spinner found his spot because India s plan A started to fail. The wrist-spin twins faded as the tournament progressed.

Kuldeep Yadav and Yuzvendra Chahal were supposed to win India this World Cup. This pairing was the unique weapon in Kohli s armoury, one that no other team possessed. And why not, for they transcended conditions and opponents, churning out results one after another. One bad defeat to England changed things Yadav was dropped against Bangladesh and Jadeja was back thereafter.

(READ: India ultimately undone by the day that threatened to come much earlier)

It was an important moment, similar to one last summer. Looking back over the past two years, and Yadav-Chahal delivered enough silverware wherever they played, except in England. And it was post that English tour in 2018 when Jadeja made his comeback to the Indian ODI side during the Asia Cup in the UAE. He was included as the spin-bowling allrounder, instead of the injured Hardik Pandya, and returned to the limited-overs format after twelve months.

Jadeja brings a different chutzpah to the table. He is a roughshod, and there appears nothing smooth about him, as if he has been moulded by a sum of parts. Truth told he is at different times, in different situations, and across different formats, he has won the game with the bat, or the ball, or even simply with his fielding. The underlying point herein is simple. Back in September 2018, even with the wrist-spin twins in full flow, there was space for him in India s World Cup plans.

And so, here he was, in the grandest stage of his international career yet, trying to influence a semi-final India s way. It was a two-day job, a unique affair. But Jadeja was undeterred, as if he was determined to prove a point.

(READ: With a shot in the arm, rejuvenated New Zealand are back on the prowl)

His first essay in this fight had come on Tuesday as New Zealand batted on a slow pitch. 1-34 from 10 overs, whilst Chahal went for 1/63, and on that pitch it underlined the golden value of experience. Jadeja has bowled on such tracks and knows how to use the conditions to his advantage. He keeps bowling his stock, straight deliveries, and then pushed in that natural variation that goes away.

When Henry Nicholls was bowled, he got massive turn, almost underlining why even 240 would be an uphill task for India. This is where Chahal s criticism comes in at a major turn in this game, he went missing. Often he has bowled in tandem with Yadav, but Jadeja had no support from his spin partner. It didn t impact the game until later, when Mitchell Santner sent down an astonishing opening spell of seven runs from six overs etching out two wickets.

With the ball, he could have done no more when the game resumed on Wednesday, but it is tough to keep Jadeja out of action for long. If this game will be remembered for that stunning Martin Guptill run-out of MS Dhoni, Jadeja put in an astonishing piece of fielding prior to that, following it up with a sharp catch at the boundary. And let it be said here, there is no other fielder in this Indian team capable of hitting a direct throw from the deep. Only him!

At that point in time, it seemed like Jadeja s day, albeit it was a weird thought. How could it be, for India would have to suffer for the number eight batsman to make good on victory. As it turned out, India lived through their worst nightmare in face of some brilliant bowling and fielding.

But Jadeja doesn t give up. He hasn t reached where he is by giving up. There would have been hundreds of detractors when he first started out, but it didn t matter then. It doesn t matter now either even if a detractor is sitting in the commentary box, talking on ICC s world feed. Never in the world of cricket has someone been made to eat humble pie in such a public manner. Bits and pieces, he said? Try golden cricketer instead.

That he was in Dhoni s company only helped the former Indian skipper is one of the reasons why Jadeja is who he is, single-handedly breathing life into the Indian innings when all seemed lost.

The sword-celebration and shrugging glance at the commentary box were courtesy of a counterattack. Perhaps the Indian dressing room expected it to come from Rishabh Pant, or from Pandya. It came from Jadeja, as he seized the moment. Cuts and glances, a big hit off Santner who had a chokehold on scoring until then, and racing to the half-century.

And so he fought, for his team s survival, for Rohit Sharma s mountain of runs and Jasprit Bumrah s brilliance, for the billion fans back home, and for the hundreds who travelled here to watch the World Cup, and to take the trophy back home. 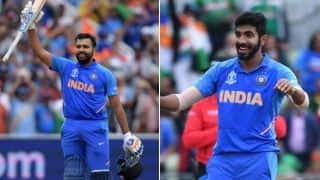 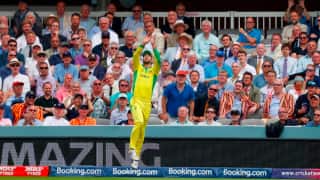