The table is open for speculations regarding the first-ever pink cricket international match in India.

Late last year, Cricket Australia (CA) left no stone unturned to bring day-night Test out of planning books on the cricket field. All roadblocks were cleared efficiently, and as far as the apprehension of the players was concerned, CA declared prize money of $ 1 million for the winners. It all went well.

The question that arises at this point is: how desperate BCCI are. On their part, the Sourav Ganguly-led CAB organised the first-ever day-night game the pink Kookaburra cricket balls some time back. Since New Zealand were slated for playing a Test in Kolkata, it looked like the day-night Test in India will be played at the iconic Eden Gardens.

But neither the itinerary citing a traditional 10 am start, and nor BCCI or NZC providing their statements on the expectation of the day-night India versus New Zealand, it is likely that India might play one of their 5 against England later in the year.

New Zealand will be the first team to arrive in India this winter, for 3 Tests. Bangladesh will be in India too, for a one-off Test in Hyderabad. It is unlikely that India will give a highly lucrative and big-ticket item of its first day-night Test to them. That leaves England and Australia, who are up next, respectively. ALSO READ: India’s opinion on day-night cricket, pink balls crucial

If at all BCCI decide to host England for a day-night Test, there are possibilities that it might just work in the favour of the touring team. To start with, England are far more superior bowling side that relies on swing, and slight breeze in evening might work in their favour. England showed their mastery in getting the red Kookaburras (in Australia, Ashes 2010-11) and SGs (in India, 2012), and James Anderson and co would arrive with all their homework done.

Another crucial factor is that in a day-night Test, two sessions are likely to be played under lights and only one when the sun is out. So, a team like England which might crumble to spin may get some breather if the dew settles in and the Indian spinners find it hard to grip the ball. And now you can recall why India lost to West Indies despite a massive total in the ICC T20 World Cup 2016 semi-final.

But this too, again, is a speculation. BCCI president Anurag Thakur has made it clear there is no rush to have the day-night Test, and there is a possibility of not having it this ‘India cricket’ season. 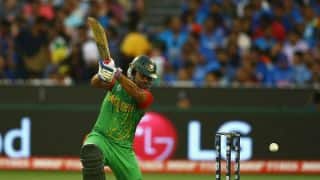