The New Zealand opener has tipped West Indies as the team to be wary of in England this summer.

Currently with Sunrisers Hyderabad in their IPL 2019 campaign, the New Zealand opener Martin Guptill has one eye on this summer’s ICC Cricket World Cup, understandably.

New Zealand have never won the World Cup, with 2015 marking the first instance that they reached the final. On six prior occasions, they lost in the semi-finals.

Guptill, a member of the Black Caps’ 2011 and 2015 campaigns, is hopeful of their chances in England this summer but before that, he hopes to see Hyderabad win the IPL.

CricketCountry spoke to him between games. Excerpts:

What is the mood in the Sunrisers Hyderabad camp right now, especially on the back of two convincing wins?

The two wins have been fantastic. The way our batsmen have really set the game up for us, it s an incredible set-up to be part of. Davey (David Warner) and Johnny (Jonny Bairstow) scored two hundreds in the last game (against Royal Challengers Bangalore) and they are batting very well. It s one of the real excitements for us at the moment and they are crucial for our team s chances moving forward in the IPL.

How is Kane Williamson’s shoulder? Is he being very cautious keeping the World Cup in mind?

I haven t spoken to him the last couple of days, it has still been giving him a little bit of grief, but I am sure it s settling down quickly and hopefully, he can be back playing in the next couple of games. The World Cup is definitely at the back of his mind. It s a big year for all international cricketers and with the World Cup just around the corner, it sure is there hovering on this head.

You were in cracking form in the Bangladesh series with a couple of tons under your belt. Now, with Hyderabad, still yet to get a game, how much of a challenge will it be to find the momentum when you pick up the bat?

It s been fine. I came over here knowing that probably I wouldn t be playing in the first part of the tournament. So, I came over here to train hard and just keep my rhythm that I had in the home summer going in the nets. I ve been able to do that so far and I just want to keep that going. If I get the opportunity to play, then hopefully I can just replicate what I ve been doing in the middle.

How do you think this IPL stint will help you in the World Cup?

Just being involved in the team. Hopefully, I get a couple of games at the end of the tournament so that I can get a little bit of game time under my belt. Playing any sort of cricket is good preparation for any World Cup you are going into. (READ: Guptill gearing up for World Cup by facing Rashid Khan in the nets)

The New Zealand World Cup squad was announced yesterday. Could you tell us more about the surprise selection of Tom Blundell?

Tom is a very talented player. He first jumped onto the scene in Test cricket and scored a hundred on debut (against West Indies in December 2017). He s been playing very well for Wellington over the summer. He s a very good ‘keeper and I think that was one of the main reasons they picked him, so that they have a back-up ‘keeping option in case something happens to Tom (Latham). Very happy for Tom Blundell and he s going to be a really good addition to our squad.

Very exciting squad, strong squad as well. We are going to have a good time over there and we are going to prepare as best we can. We are just going to go there and have a lot of fun playing. If you look at the squad, there s a lot of experience there in the batting and bowling department, so everyone s going to be quite excited. Once the IPL finishes and we get together as a team, everyone s going to be raring to go. (READ: New Zealand’s World Cup squad: What we’ve learned)

How are you preparing for the World Cup? With no Brendon McCullum in the side, are you looking at playing his role attack from ball one?

I m just going to bat like I bat. If I am going to try and bat like someone else, then I am not being true to myself and the team. So, I am just going to go out there and prepare as best I can. If I get a ball to hit first up, then I will try and hit it, but I ll also try and give myself time to get in, but my place doesn t change too much.

The squad witnessed a transition with Gary Stead coming in. You were under Mike Hesson as well. What does Stead bring to the table?

Yeah, they are obviously very different characters. Steady brings a little bit of international experience to the coaching, he s been there, and he s sort of done that in a way. Having that experience and he s been around for a long time as well. He was one of the coaches at the New Zealand Cricket Academy when I was there in 2005, so I ve known him for a while and I ve got a good working relationship with him. It s been a great transition so far and there are some exciting times for us going forward.

Do you think this time New Zealand are primed to lift the title?

Everyone s got a chance at lifting the Cup. It s a different format this year. Everyone plays everybody and then the finalists go through. So, it s the best of the best and whoever plays the best cricket on the day and the most consistent cricket, will eventually lift the Cup.

Who are your favourites to win the World Cup?

It s too hard to know! There are quite a few teams that put their hand up. India have got a very strong team at the moment, they have been playing very good cricket. England as well have been playing some amazing cricket and look what Australia have done in the UAE against Pakistan as well. There are teams that are in form, but there are also teams that can take the match from anyone on the day. If you look at what the West Indies in the Caribbean with Chris Gayle going crazy. So, anything is possible with any team. I can t put a finger on any team.

And the dark horses?

West Indies probably would be the dark horse. They ve got some match winners all the way down their line-up. So, it s going to be a fun tournament, one that every team is going to have the same feeling about, the best team will win on the day.

Are you looking at being with Hyderabad for the entire duration of the IPL or will you be leaving to gear up for the World Cup?

No, I am here for the whole tournament. It s going to be a pretty exciting tournament. 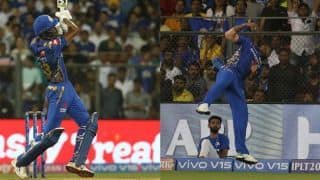