Did Fred Trueman need 10 wickets in that match or 9?

Fred Trueman became the first to reach the 100-wicket mark in the summer of 1960. However, John Arlott cited the same match as the origin of one of the most famous Trueman sledges that took place on July 3, 1960. Unfortunately, the incident could not have happened. Abhishek Mukherjee explains why.

We have relived the tale of Fred Trueman becoming the first Englishman to a hundred wickets in the summer of 1960 amidst much drama.

To put it briefly, Trueman arrived at Bradford with 90 wickets under his belt. Warwickshire followed on, and Trueman put up one of the finest displays of sustained pace bowling. He sent down 37.2 of the 92.2 overs bowled by Yorkshire, and took 3 for 31 and 7 for 42 to reach the milestone.

This piece, however, is about sledge that the match gave birth to. John Arlott seems to be the first to mention it, in Fred: Portrait of a Fast Bowler. As he often did, Trueman had showed up early and had paid a visit to the Warwickshire dressing-room and chatted with the opposition cricketers. He got up only about an hour before the match began but not before uttering a line that would attain cult status.

Let me quote Arlott verbatim: At about eleven o clock he eased himself off the table to go and change with the words Oh, yes, and I only want nine wickets to be first to a hundred so you buggers can start drawing short straws to see which one I don t bloody well have.

The oft-quoted line has made its way to books on sledging. It was an outrageous statement to make, but it was also in synchronisation with the image of the great man: did Trueman, after all, not come up with lines as outrageous as this?

Earlier in the book Arlott also mentioned that he came to Yorkshire s match with Warwickshire at Bradford nine short [of the 100-wicket mark].

But that could not have been true, right? Trueman needed ten wickets to reach a hundred and not nine. The auto-generated match notes on CricketArchive agree as well ( FS Trueman reached 100 wickets in First-Class matches for the season when taking his 7th wicket in the Warwickshire second innings ).

But what if Arlott was right and there had been a computational error? I thought it was wise to do a manual check before drawing conclusion.

Obviously Arlott did not get his facts right. It has happened with Arlott before. I have discussed here how he had not bothered to tally his facts to the scorecards.

There was another option: Trueman did not have his facts right before the match. This was not likely, for Trueman kept track of whatever he did on field quite diligently.

Yes, the story was almost certainly invented by Arlott; and not for the first time, the master had scant regards for facts.

The chapter makes worse reading as it goes on. Arlott had to stick to the fact that Trueman went into the match with 91 wickets. He could also not change the fact that Ossie Wheatley, the rank No. 11, was the 100th for it ended in a dramatic hit wicket.

Arlott mentioned that Trueman had three wickets in the first innings. That left him with 7 (in real) and 6 (as per Arlott). Then came that whirlwind spell where he took 4 wickets. This was followed by the adrenaline-fuelled wicket of John Kennedy.

So now he was stuck at 98 (but 99 as per Arlott). Now Arlott switched to three wickets were left for the day and he wanted two of them. It was convenient, and covered up with the lucid prose we associate Arlott with but the fact remains that he had not adhered to facts.

Unfortunately, the story continues to remain part of the Fred Trueman legend. 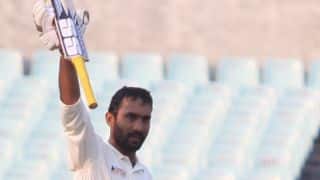