Gabbatoir and The Ashes: A history and a threat England will find hard to overcome

Gabbatoir and The Ashes: A history and a threat England will find hard to overcome

A 4-11 head-to-head (add 5 draws to that) makes poor reading, but there is more to it: England had won their first 2 Tests at The Gabba; and a third win came in the Packer era when England had their full team and Australia, at best, a third-string side.

The Gabba is no ordinary ground. There is a reason Australia invariably start their domestic Test season in the heat of Brisbane, on one of the hardest pitches across the world. The WACA or Sabina Park may have lost that bounce, but not The Gabba. Add to that the harsh conditions, and you will know why The Gabba has turned out to be the Australian stronghold over decades. They come at you with bat, ball, voice, body language, and what not. They are at you as relentlessly as the Subway Surfer policeman, arresting you at the slightest of lapses. Even the infamous Brisbane flies seem at their peskiest, bothering batsmen and fielders alike.

No touring side has won a Test at The Gabba since 1987-88, and that was West Indies of the 1980s; they should ideally not count.

Australia s success ratio at Brisbane reads a whopping 4.625 (37 wins, 8 defeats). Put a 20-Test cut-off, and only Pakistan and South Africa can boast of stronger fortresses, at Karachi and Centurion respectively.

The Gabba has been nothing short of a nightmare to England. Let us take a trip down memory lane. They have had their share of glory, but that has been more of an exception than a rule. A 4-11 head-to-head (add 5 draws to that) makes poor reading, but there is more to it: England had won their first 2 Tests at The Gabba; and a third win came in the Packer era when England had their full team and Australia, at best, a third-string side.

The Bodyline series was sealed at Brisbane but not before some attritional cricket. Australia made 340, losing 4 wickets to Harold Larwood. England kept losing wickets, and things looked bad when Eddie Paynter was as good as ruled out of the Test with tonsillitis. He was in the hospital, an injured Bill Voce by his side.

But Paynter, presumably under pressure from Douglas Jardine, could not be held back. After a brief tussle with the hospital authority, he left the hospital despite running a temperature of 102 F. He was fortified with eggs, brandy, a warm shower, and champagne at the dressing-room. He batted for almost four hours on an extremely hot day for his 86, the highest score of the innings.

They tucked him into the bed that night again. He returned to hit the six in the fourth innings that sealed The Ashes.

Four years later Australia were caught on a gluepot in Don Bradman s first Test as captain. The first three innings read 358, 234, and 256, which meant that Australia were left to chase a not-too-improbable 381. A thunderstorm, followed by incessant rain, then changed the wicket completely. Australia were bowled out for 52 as Voce (4 for 16) and Gubby Allen (5 for 36) bowled unchanged. It remains their lowest total at home since 1887-88.

The scoreline (Australia 645, England 141 and 172) demonstrates the chasm between the sides in the 1946-47 Test. The defining moment of the Test, however, came on the first morning. Australia lost both openers by 46. Bradman looked extremely patchy.

Then, at 28, he edged one off Voce that went to Jack Ikin at second slip. Obviously nobody appealed (Ikin took it near his chest), but Bradman showed no intention to leave. The confused umpires had a discussion before deciding they were unsure.

A fine f***ing way to start a Test series, Wally Hammond blurted out. He knew. Bradman scored 187 and crushed England for the next year-and-a-half.

A crazy day of cricket

Australia were bowled out for 228 on Day One in 1950-51. So far, so good, nothing unusual about that before the rain started, that is. On a wicket virtually impossible to bat on, England finished the next day (the third) on 30 for 6 in the fourth innings.

What had happened? England found Bill Johnston (5 for 35) unplayable and declared on 68 for 7, 160 runs behind. The idea was to let Australia have the worst of the wicket. Australia fared worse till they declared at 32 for 7. England held back Len Hutton and Denis Compton for the conditions to improve.

It was a bad move in hindsight: Hutton, batting at No. 9, was eventually left stranded on 62 on the next day as England were bowled out for 122.

England s 1958-59 debacle perhaps had more to do with a battered team spirit than anything else. An aloof captain (Peter May) and a totalitarian manager (Freddie Brown) did not do much to boost the team s morale.

On field, England were bowled out for 134 before restricting Australia to a 52-run lead. Unfortunately, a target of 147 was never going to bother Australia.

The 1960s produced some of the dullest cricket across the world. Even The Gabba did not escape the menace. The urn stayed with Australia throughout the 1960s in a decade that featured 16 drawn Ashes out of 25.

Only 30 wickets fell in the 1961-62 Test, and the cricket was generally not exciting enough. Both sides tried their best to not lose. Rain cut down a day in 1965-66. Australia declared on 443 for 6, took a 163-run lead, and asked England to bat again. England happily played out time. And in 1970-71, the third innings started towards the end of the penultimate Test.

Things did not look particularly menacing for England when they arrived in Brisbane in 1974-75. They restricted Australia to 309, which was quite impressive. Then they ran into Jeff Thomson.

Dennis Lillee bowled with the wind, and yet Thomson made the great man look slow. Thomson even frightened me sitting 200 yards away, wrote Keith Miller. Later in the series he snapped David Lloyd s box into two. Mike Denness dropped himself. Colin Cowdrey was summoned out of retirement. John Edrich s ribs got smashed. In other words, everything went wrong.

The 1978-79 Ashes was probably Mike Brearley s easiest assignment: he had his full team while Australia, under Graham Yallop, was a third-string side at best. The Australian top three got 9 in the first between them and 20 in the second. Hundreds from Kim Hughes and Yallop himself did not help. England won comfortably by 7 wickets.

The 7-wicket margin was repeated four years later. Geoff Lawson, with 6 for 47 and 5 for 87, rolled over England twice. Australia s first-innings lead of 122 turned out to be decisive in the end.

England were not expected to win the series, but they did, and it all began at Brisbane. Ian Botham started it with a whirlwind 138. Then Australia were bowled out cheaply twice, and England chased down 75 to win by 7 wickets.

Then things got very bad

Then began a two-decade phase of humiliation for England. There were occasional highs. For example, they got a 42-run lead in 1990-91 despite being bowled out for 152. Unfortunately, Terry Alderman then took 6 for 47, England were skittled out for 114, and lost by 10 wickets well inside three days.

Four years later they were steamrolled by a Michael Slater onslaught. He started by smashing the first ball of the series, certainly not a rank long-hop, for four. That set the tone for the Test. Then Shane Warne routed England with 8 for 71. England never recovered and conceded The Ashes.

Shane Warne s absence was probably the only thing that prevented Australia from winning the 1997-98 Test. From a lead of 110 to a quick declaration to setting a target of 348 on a wicket that had started to take turn, everything went according to plan. England collapsed from 96 for 1 to 161 for 6, but Stuart MacGill and Mark Waugh could not run through. What would Warne have done?

Not for the first time, The Ashes was decided on the first day in 2002-03. To everyone s surprise, Nasser Hussain opted to bowl on a bone-dry pitch. To make things worse, Simon Jones, in an attempt to slide and stop a ball, ruptured his anterior cruciate ligament and was ruled out of the series.

Matthew Hayden amassed 197 and 103. And while England batted gamely in the first innings for 325 (with ten men), they crumbled at the sight of the 464-run target. They were shot out for 79.

The concept of England arriving in Australia to retain the urn seemed strange. So strange, that poor Steve Harmison lost complete control of the first ball: it was so wide that it went to Andrew Flintoff at first slip.

Australia declared on 602 for 9. They batted again despite a 445-run lead and set England 648. England fought gamely, and at 244 for 3 on the fourth evening they probably had hopes on a draw. In the end they were bowled out for 370. Australia whitewashed them for the second time in history.

The 2010-11 Test seemed to be headed for only one direction after Day One. Peter Siddle, after years of providing yeoman services, won over The Gabba with a hat-trick on his birthday. Only one result was possible after England were bowled out for 260 and Australia piled up 481.

But Alastair Cook batted, and batted, and batted. A first-wicket stand of 188 with Andrew Strauss (110) helped erase a chunk of the deficit, but Cook was just warming up. He batted for over ten hours for his unbeaten 235. Jonathan Trott (135*) helped him put on an unbeaten 329. And England declared on 517 for 1.

Cook scored 766 in the series and England won the series 3-1. It remains the only time since 2001 that The Ashes was won by a visiting team.

It is difficult to say whether Mitchell Johnson had hurt the English psyche as brutally as Thomson had, but the blows were almost certainly comparable. Johnson took 4 for 61 and 5 for 42 with raw pace, uninhibited aggression, and relentless hostility. Such was the intensity of his bowling that Jonathan Trott returned home after the Test, citing stress-related illness.

Johnson finished with 37 wickets at 14. If batsmen were fortunate to survive Johnson, they invariably succumbed to Ryan Harris (22 at 19) or Siddle (16 at 24).

As has often been the case at The Gabba, the tone of the series was set. England were mauled 5-0. Neither Kevin Pietersen nor Graeme Swann played Test cricket since then… 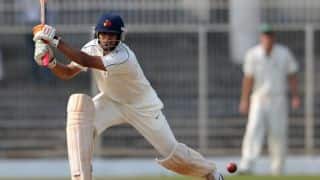 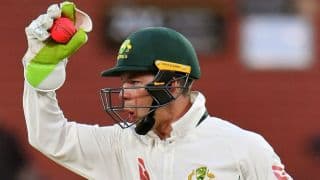