Graeme Smith is a colossus who defined cricket in 21st century the way few others have.

Graeme Smith’s sudden declaration earlier today took the world of cricket by shock. Abhishek Mukherjee looks at the Colossus who defined cricket in 21st century the way few others have.

The dreaded day has finally come. There have been speculations regarding Graeme Smith’s potential retirement: he had, after all, been in discomfort of all sorts in the ongoing series, having scored 42 runs from five innings. Never at comfort against left-arm seam, Smith has faced 15 balls from Mitchell Johnson in these innings: he had scored ten runs and has been dismissed twice.

Some men would have stayed on: he had done a decent job in the home series against India, scoring 186 runs at 62. In the innings prior to the India series Smith had scored an emphatic double-hundred at Dubai, adding 338 with AB de Villiers and batting Pakistan out of the Test, and leading the way to enforce a thumping innings-defeat to help save the series.

Not many cricketers can resist the temptation of finishing with 10,000 runs in Tests: Smith has scored 9,262 Test runs, and will in all probabilities become the first man to finish in the 9,000s. But Smith’s world does not have a nook specially reserved for individual records and triumphs. They have always taken a backseat, and will forever.

Smith had had his problems against Zaheer Khan in the past, and with the grim determination that has defined his career over the years, he had managed to sort it out. Or, at least that was what he had thought. He was probably confident that he will dominate Johnson in his own turf. It has been, after all, only a season back that he had dominated Mitchell Starc and Johnson on his way to a 100-ball 84 at WACA.

The ignominy of being troubled by Johnson had not gone down very well with Smith. Not only did he struggle, his shortcomings were brutally exposed. The towering frame and imposing personality that had made the Board mark him out as the leader over a decade ago were not enough to dominate the opposition. He was not happy with himself.

He had to quit.

The resemblance with Mark Taylor had always been an uncanny one. Both men were talented left-handers who had marked their advent with emphatic performances on English soil; both men were chosen to lead their sides despite the presence of several seniors; and both men were accepted very well by their seniors — not only because of their on-field consistency, but also because of their ability to lead from the front.

Both men have played crucial roles in taking their sides to the top and toppling the leaders of world cricket. If Taylor had stopped the West Indian juggernaut at their den in 1994-95, Smith had done the same on Australian soil in 2008-09. Both men opened batting for their sides, and had identical styles of batting: neither had the natural flair one associates with left-handed batsmen, but their power, guts, and temperament helped them to make it big to the highest level.

On the field, too, both were quality slip fielders; of course, few men have matched Taylor at first slip, but Smith has not been far behind either. When the two gum-chewing, hard-jawed men sorted out the fielding, it was easy for any passer-by to guess who the man in charge was.

Wisden had written of Taylor: “A French or Italian stranger to cricket, introduced to a ground where Australia were in the field, would surely have been able to point out who was in charge: the one who strode down the pitch between overs, carrying a helmet under his left arm, directing with his right arm here and there, and chewing gum, his very jaw the focus of Australian cricket in the field.” The same could have been said of Smith as well.

Smith had started his Test career in the aftermath of the Hansie Cronje incident, when the selectors decided to bring in new players. In just over a year after making his debut, he was leading his team at Chittagong, and a few months later he landed on England, scoring 277, 85, and 257 in his first three innings. Whatever question had been there regarding his eligibility as a captain had vanished: seniors like Gary Kirsten, Herschelle Gibbs, Jacques Kallis, Mark Boucher, Shaun Pollock, Makhaya Ntini, and Boeta Dippenaar had allowed the kid to rule over them.

Thus began a journey matched by few in the history of world cricket: Smith has led his side in more Tests than anyone else; he had dented the Australian stronghold by laying siege at on that historic tour of 2008-09; he took South Africa to the top of world cricket; and his numbers in successful fourth-innings chases — 1,141 at 87.76 with 4 hundreds — towers above the rest. South Africa has never lost a Test when Smith has scored a hundred (and that is 27 hundreds that we are talking about here).

He had helped chase down targets the way no one has: whether it was about the unbeaten 125 while chasing down 234 at Basin Reserve, the 90-ball 68 to mastermind another 220-run chase against the same opposition at New Wanderers, leaving the West Indians clueless with a 79-ball 85 at Newlands against a target of 186, or the 147-ball 103 onslaught that had triggered the famous 414-run chase at WACA, Smith had done it all. Of the ones that did not come off, a concussed Smith had walked out at 118 for 6, eventually remaining stranded on 67 as South Africa were bowled out for 247 chasing 325 against England.

The crown jewel, however, has to be the Edgbaston epic: few captains think of chasing down 283, especially if the chase has been reduced to 93 for four. Not Smith. He took on a strong English attack (being especially severe on James Anderson) and pulled off a near-miraculous chase, remaining till the end with 154.

Between all that, one must not forget his valour at SCG: with 7.2 overs to bat out the Test Smith had walked out with a broken arm. Wisden later wrote: “Some time during Steyn’s 65-minute stand with Ntini the wounded captain borrowed white clothes — the shirt came from Kallis, and a sweater, complete with hamburger stain, from Harris — then took off the plastic cast encasing his broken hand and slipped it gingerly into a glove.”

Ricky Ponting had brought back Johnson, and every time the ball hit the bat Smith winced in pain, but was not willing to give up. He batted with one good hand, and nullified the menacing pace of Johnson and Peter Siddle despite the ball jarred against his bat time and again. It finally took the ball to hit a crack and dart in to hit the timber: the injured arm could not get the bat down in time.

It will not be an exaggeration to refer to Smith as the man who had changed South African cricket in the 2000s. There have been superior cricketers (being a teammate of legends like Kallis, Pollock, Boucher, Dale Steyn, and AB de Villiers hardly leaves you with a chance to hog the limelight) but there has seldom been any doubt regarding who the leader of the pack was.

What makes Smith stand out, though, is the impact his leadership has brought to cricket. His tenure as captain, as has been discussed before, been the longest in history. He had lost series; but when the selectors had decided that he would be The Chosen One, they had thought long-term.

It had taken nine years for the phoenix to rise from the debris of the Cronjegate incident, humiliating home-and-away defeats against Australia, the unceremonious, incredibly unprofessional exit from the World Cup at home, and the retirements of Allan Donald, Jonty Rhodes, and Kirsten to reach the number one spot in Test cricket (does anyone remember their oft-rises to number one in ODIs as well?). The selectors knew there was no short-cut to it: they had hatched a long-term plan, and had found their man who would execute it to perfection, allowing the stars to do their work, and quietly helping South Africa up the ladder.

The fans of the sport will not remember Smith as a legend, either. The players will, though. The burly boy that had once replaced Pollock at the helm is about to quit the sport a month past his 33rd birthday with perhaps a few thousands of runs still left in him. He had earned respect of the players, teammates and opposition alike, as time went on.

The players have learned to fear him. The adversaries knew that no match was over till that man was there; the teammates knew that the ‘kid’ would always there to shield them under any circumstances; he was the General who used to lead from the front, scheme things from the rear, and was almost never around to claim the spoils after victory. All this, while being the nice but determined “kid” of the side to begin with, sounds quite incredible.

We will miss you sorely, Smithsy. It was nice knowing you. You’re leaving us with a hollow that will never be fulfilled and a legacy that we will cherish forever. 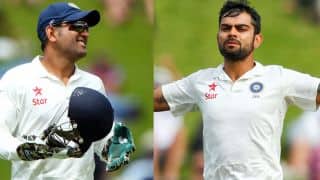