A recent instance of a team scoring big after a first-ball wicket was New Zealand’s 429 after losing Tim McIntosh at Dunedin in 2009-10.

Let us look at the corresponding list in Test cricket. The highest total in Tests also involved the same teams as in ODIs — England and New Zealand. England scored 560 for 8 at Christchurch in 1932-33 after losing Herbert Sutcliffe off the first ball of the match. READ: Everything about nervous 190s in Test cricket

There have been two totals in excess of 450 after the team lost their first wicket on the first ball of the match: Australia scored 494 against England at Headingley in 1926, and India amassed 465 for 8 against Pakistan at Jaipur in 1986-87. READ: Both openers scoring ducks in the fourth innings of a Test

A recent instance of a team scoring big after a first-ball wicket was New Zealand’s 429 after losing Tim McIntosh at Dunedin in 2009-10. They won the Test by 32 runs. The table below lists the highest totals in this case. READ: The leading run-getters in Test cricket for each team

– None of the above teams lost the corresponding Tests.

– The highest total after losing a wicket off the first ball of a Test that resulted in a defeat was West Indies’ 287 against England at Durham in 2007.

– The lowest total after losing wicket in the first ball of the match is England’s 75 against Australia at MCG in 1894-95. Interestingly, England won the Test by 94 runs.

– There are four team scores between 300 and 350 after losing a wicket on the first ball of the match.

Overall, Gavaskar has been dismissed first ball of an innings five times in his Test career — the most by any batsman. 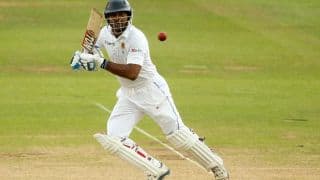 Sachin Tendulkar: statistically the best No. 4 batsman of all time?