The secret diary of the Under 19 World Cup winning Indian captain Unmukt Chand revealed! Here are some of the points noted in the Indian U 19 captains diary. 1.  Man! We are finally in the Under-19 World Cup tournament. A trophy win here and life set ho jayega! But there are some passengers in this side, influence and politics be damned!

2. I thought he was in the side since his dad has BCCI assignments as media manager. But this bloke is not bad. He can bat, he can bowl and saala, he takes damn good catches in slips! Maybe the odd case of worthy talent and influence!

3. Another failure from this guy! Am convinced his family member’s proximity to one selector worked more for him than his talent or performance. Ugggh!

4. Bach gaya saala! Who expected the bowlers to stick in there and get us those runs for the last wicket against Pakistan! It’s like the Supreme Court granting you clemency after a ‘death sentence’. Half these buggers can’t bat, but don’t blame me – got out to a fabulous catch, you know!

5. This joker cannot bat, but he has such influence we need to play him every game. Time to atleast promote the better bat ahead of him in the final tomorrow.

6. Well, time to learn from Virat Kohli. What NOT TO DO from a behavior perspective in case we win the World Cup. Oh yes, I do remember his antics after he led us to a win in 2008.

7. This expert asking me if I have Dhoni’s number at the post-match interview! If Dhoni does not answer VVS Laxman’s call, what are my chances?!!! Loser!

8. Man, the Aussie players’ girl friends are real cute chicks. I spent some time after the final victory to make a “score” but failed. The the media read it differently! Lost but still won! Woo hoo! Anyway, thanks for dropping me Bosisto! Will remember you forever. But remember, I made a Herschelle Gibbs out of you! Ha, ha, ha!!

9. WTF? Match-winning century and a captain to boot as well, but no media assignments yet in these days of communication technology. Unbelievable.

10. Jokers! I was talking about being allowed to take the “TEST” in the context of playing the Bangalore Test in place of that old horse Sehwag, but the silly media thought I was talking of Delhi University exams! What degree, what life! Being a top notch cricketer can earn you the moolah in just a few seasons! Dammit, am pissed, where is that duty free bottle?

(Vincent Sunder aspired to play Test cricket, but had to struggle to play ‘gully’ cricket! He managed a league side to title triumph in the KSCA tournaments. He was debarred from umpiring in the gully games after he once appealed vociferously for a caught-behind decision when officiating as an umpire! After two decades in the corporate sector, he became an entrepreneur with the objective of being able to see cricket matches on working days as well. Vincent gets his ‘high’ from cricket books and cricket videos and discussing cricket)
First Published on
Last updated on September 15, 2014 4:55 PM IST
TOPICS:
Virender Sehwag MS Dhoni BCCI Vincent Sunder cricket humour Unmukt Chand Under-19 World Cup William Bosisto Delhi University Unmukt Chand diary 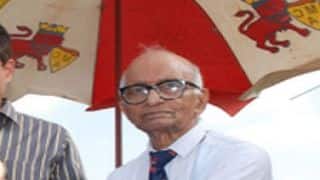