Was Monday a good day for Bangladesh in ICC Champions Trophy 2017, or was it not such a good day?

Was Monday a good day for Bangladesh, or was it not such a good day? Even for the Bangladeshi supporters, it is a difficult yes-or-no question. They would have been happy that their team escaped with a point against Australia, thanks to the rain, but they would also have been pretty disappointed at a fairly underwhelming batting performance. I must confess I was a little bit surprised that Bangladesh opted to bat after Mashrafe Mortaza won the toss. When play began in the afternoon, there was a thick cloud cover and the conditions were asking to be exploited by the faster bowlers. While they may not be the quickest in the world, I am sure Bangladesh s bowlers would have asked serious questions of Australia s top-order had they bowled first. As it is, even later in the day, they didn t make things easy for Australia, so I believe they would have posed even more of a challenge in the afternoon. FULL CRICKET SCORECARD: ICC Champions Trophy 2017, Australia vs Bangladesh Match 5 at The Oval

Having said that, I suppose Mashrafe s decision to defend a target must have stemmed from two factors one, the prospect of rain and two, the fact that the surface had already been used once in the tournament. There was a time when, with the threat of rain looming, chasing was the preferred option, but that isn t necessarily the case anymore, so probably Mashrafe thought Bangladesh s best chance was to post a total and then defend it on a wearing surface that would have brought Shakib Al Hasan and Mehdi Hassan into play.

I was glad to see Bangladesh playing the extra bowler, though I suspect it really wouldn t have mattered too much had the game gone the distance. Once again, Tamim Iqbal was quite outstanding, and he was extremely unfortunate to miss out on a second successive century in the tournament. I thought this was an even better knock than against England, simply because the conditions were particularly challenging. FULL CRICKET UPDATES: ICC Champions Trophy 2017, Australia vs Bangladesh Match 5 at The Oval

While there wasn t too much swing, Australia s pace attack is of the highest quality, and Mitchell Starc in particularly was really bowling quickly. Tamim weathered the storm excellently and more than held his own, but unfortunately, he was let down by his team-mates. I don t think the other Bangladeshi batsmen had a technical shortcoming. After all, this same top-six has played and performed in different conditions in different parts of the world. I think the problem, if any, was in the mind.

Apart from Soumya Sarkar, who got a very good delivery from Josh Hazlewood, most of the rest fell to poor strokes. Perhaps they felt that the odds were stacked against them. Perhaps, too, mindful of the fact that on the same surface, England had easily chased down a target in excess of 300, they overreached themselves in looking for a big total. CT 2017: AUS bowling unit showed they do have plenty of character, feels Michael Hussey

In my opinion, this was a 240-250 pitch, given both the conditions and the fact that it would wear a little as the night unfolded. Had one of the other top-order batsmen kept Tamim company, who knows what the final tally would have been. Australia was aware that rain was in the air, and it might feel hard done by that they were within four overs of pocketing the two full points, but sometimes, that s how the cookie crumbles. It was a little lucky against New Zealand, and the roles were reversed this time around. That s something Australia will understand and accept, because things won t always roll your way.

Mother Nature smiled benevolently on Bangladesh, giving their passionate fans something to cheer. Ideally, as a player myself and as a supporter too, you want the game to go the distance, not decided on run-rates and calculators. But that is not an ideal world, and we have no control over the elements. But once again, the Bangladeshi fans came out in large numbers to support their team. It was brilliant to see just how much backing Mashrafe and his boys had; I am sure the players will feel they let their followers down a little, but the one point meant the fans could leave with a gentle smile on their lips. CT 2017: AUS ready for do-or-die clash against ENG, says Smith

This one point means Bangladesh is still alive in the competition. For them to harbour hopes of advancing to the semifinal, they must beat New Zealand, and hope for other results to go their way. The second option is not in their hands, but they must believe that they can get the better of New Zealand. For that, they will need to be more consistent with their all-round cricket. And hope that the weather at least gives them a chance of aiming for the two points. 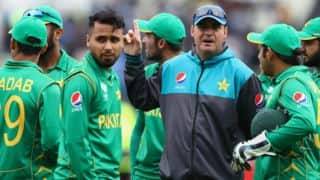