3 win-loss ratio of New Zealand at Sophia Gardens, Cardiff, joint-best by any team at this venue alongside India.

2 instances of England and New Zealand encountering in a Champions Trophy match. In 2009 New Zealand won by 4 wickets by chasing a mere 147. Then, in 2013, England won by 10 runs defending 170 from 24 overs at Cardiff, where their next clash is scheduled to happen.

3 win-loss ratio of New Zealand at Sophia Gardens, Cardiff, joint-best by any team at this venue alongside India. On the other hand, England’s win-loss ratio at this ground is 2.5, with 5 wins and 2 defeats.

269 average total for side batting first in the 5 previous matches at this venue. However, going by last 3, the lowest total has been 304, which speaks about the increase in run-flow at this ground.

1 number of score of 300 in last 8 matches for sides chasing at Cardiff. Pakistan were the last team to do this, against England by scoring 304 in order to win the match. Before that, South Africa scored above 300 at this ground while chasing against India batting second, which was also the 1st instance at this venue.

4th spot in the rankings will be taken over by England if they win against New Zealand. On the other hand, New Zealand will move down to 5th. However, a New Zealand win will not alter ranks for either side.

84 runs needed for Tom Latham to reach 1,000 runs for New Zealand in away matches. He will become the 15th New Zealand player to reach the landmark.

1 wicket needed for Jeetan Patel to complete 50 wickets in ODIs. He will become the 29th New Zealand bowler and 3rd New Zealand spinner to do so, after Daniel Vettori (297) and Nathan McCullum (63).

27 runs needed for Eoin Morgan to go past Andrew Strauss tally of 2,367 runs as England ODI captain. He will reach the 2nd spot on the list of English captains, after Alastair Cook (2,502).

3 wickets needed for Moeen Ali to complete 50 wickets in ODIs, while Ben Stokes requires 2 to reach the same landmark. Whosoever gets there first will become the 26th player for England to do so and will also become the 3rd player to achieve the double of 1,000 runs-50 wickets after Ian Botham, Andrew Flintoff and Paul Collingwood.

48-plus batting average for both Morgan and Jos Buttler against Mitchell McClenaghan. However, despite such impressive average, each man has been dismissed thrice by McClenaghan.

3 times Joe Root has been dismissed by Mitchell Santner, the joint-most for Santner against any batsman. Moreover, Root s average of 36.18 against left-arm spinners is inferior to what he has done against others.

3 times Stokes has dismissed Martin Guptill, joint-most for him against any batsman. However, Guptill averages 56.66 against Stokes. 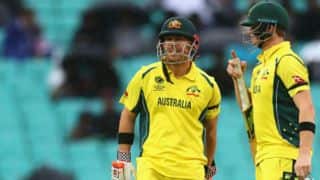