India would know that they may not burden someone like Ravindra Jadeja with a lot of workload.

India head into the tri-series against Australia and England before the all important ICC Cricket World Cup 2015. With a 17-member party for the tri-series, India would mull rotating players in order to keep them fresh ahead of the big event. Nishad Pai Vaidya writes about the likely scenarios as India try to manage their resources.

Should India enforce a rotation policy during the tri-series? With the ICC Cricket World Cup 2015 less than a month away, India may consider using their resources wisely, in order to keep them fresh for the big event. Prior to the ICC World Cup 2011, India played a One-Day International (ODI) series in South Africa with a slightly different squad as some of the big players chose to nurse their injuries before the mega event. Four years down the line, India have a younger unit and there may not be any major injury concerns. Yet, they may approach the tri-series with caution.

There isn’t much scope of instituting a rotation policy in the batting department. Ambati Rayudu is the lone back-up, with six frontline batsmen and two all-rounders in the unit. As discussed in a previous article, the top six, i.e. Rohit Sharma, Shikhar Dhawan, Ajinkya Rahane, Virat Kohli, Suresh Raina and skipper MS Dhoni are certainties. Perhaps they may take rest in turns, allowing Rayudu a longer run in the XI. There also could be a possibility of India playing both Stuart Binny and Ravindra Jadeja, the two all-rounders, in a game or two. Jadeja’s fitness remains a worry for the team as he would miss the first ODI versus Australia at Melbourne.

Having said that, it is important that India manage Jadeja well. The all-rounder has recovered from an injury and is short of game time. While it is imperative that he gets enough game-time leading into the ICC Cricket World Cup 2015, India would know that they may not burden him with a lot of workload in the tri-series. That is where Akshar Patel’s presence comes into play. Being a multi-dimensional cricketer, he provides that depth and can help India manage their spin-bowling line-up. Ravichandran Ashwin had a break last year and may also be given a breather if India go in with the two left-arm spinners.

If there is one department India have to pay more attention to, it is the fast-bowling. Umesh Yadav, Mohammed Shami, Bhuvneshwar Kumar and Ishant Sharma are a part of the ICC Cricket World Cup 2015 squad. Binny is in as the all-rounder, and although he opened the bowling during the ODIs against Sri Lanka at home, one does not expect him to be a frontline option Down Under. Dhawal Kulkarni and Mohit Sharma have been drafted in as the reserves and their presence will help India plan things better. Their performances will be closely observed as Dhoni has hinted that India might draft them into the squad for the ICC Cricket World Cup 2015.

At the outset, one would say that Shami, Yadav and Bhuvneshwar are India’s preferred combination. This combination needs to gel, but some of them may also need a break after the grueling Test series. Bhuvneshwar too has come out of an injury and he may play more games than the others. This tri-series is extremely important for Ishant, who’d want to break into the eleven before the ICC World Cup 2015. Thus, with Ishant gunning for that place and Bhuvneshwar working his way to the top mark, India may shuffle with Shami, Yadav, Kulkarni and Mohit. Binny could be an option, but would mainly compete with the other all-rounders.

It is never an easy call, is it? While you want your team to get enough game time, there is also a temptation to keep them fit. India would need to find the middle-road somewhere and proceed intelligently. 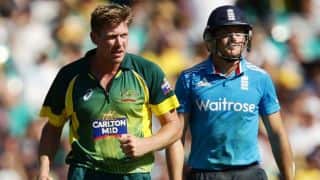