India were jubilant when they got the wicket of David Warner and for good reason too.

After India s defeat at the hands of Australia in the ICC Cricket World Cup 2015 semi-final, the media was abuzz with claims that India s bowlers failed. Rishad D Souza dispels those claims, and says it was in fact Steve Smith s brilliance that India were undone by in an otherwise even contest.

India were jubilant when they got the wicket of David Warner and for good reason too. On a track that was tipped to be a batting-paradise the Indian bowlers were doing a supple job. Even Aaron Finch looked like a fish out of water early on. When curtains were drawn on Warner’s innings, a young Steve Smith walked out to the middle. ICC Cricket World Cup 2015: SCHEDULE & MATCH DETAILS

Now, the situation for Smith was not very rosy. He may have been playing at his home ground, but the multitudes in the crowd were India supporters jeering at the very Aussies who called SCG home (Clarke’s call for a #GoGold couldn’t overcome sheer Indian dedication), the bowlers were enjoying plenty of swing and Smith’s partner was edgy.

Smith himself was unable to negotiate the conditions very well initially. With the ball doing so much, the pressure of a knockout and the shame of playing to alien crowds at a home ground Smith was certainly a little at sea. Yet he was resolute; he was determined on staying. Top 10 batsmen in ICC Cricket World Cup 2015

What was edginess initially metamorphosed into elegance with each passing minute at the crease. Everyone had to sit up and take note of those drives, the Indian contingent at the Sydney Cricket Ground (SCG) found their voices losing the edge as the Indian bowlers struggled to find the willow’s edge.

In the aura Smith radiated, even Finch was transformed. Instead of going for the big shots compulsively (which proved perilous for most batsmen on the day), he simply worked the ball around and only drove a few loose balls majestically to the boundary like Smith but not as well. Top 10 bowlers in ICC Cricket World Cup 2015

Without ever appearing rushed, Smith sailed to his hundred at more than run a ball. A hundred that aroused applause from majority of the crowd (yes, even most Indian fans clapped their appreciation). Setting the platform to cut loose, he decided to go for the big ones and got out in his attempt to do so. My claim that Finch played a controlled innings only in presence of Smith was backed when he got out soon after, going for a biggie.

Finch by then had played a good hand of 70 odd runs and with an Australian line up of that sort, the stage was set for a 350+ score. They only got to 328 however, only after Mitchell Johnson played a blitz. Most other batsmen failed to make much of an impact. Apart from that time of Smith’s stay at the crease, the SCG barely looked like a batsman’s paradise. Top 10 wicketkeepers in ICC Cricket World Cup 2015

And it probably wasn’t.

Yes, the Indian opening pair put on a threatening partnership but only after multiple lucky breaks; dropped once and dropped short on a few occasions. Once the opening stand was finally broken many Indian batsmen went out cheaply. Virat Kohli and Suresh Raina failed. Rohit Sharma played good support to Shikhar Dhawan. He later pulled Johnson for an authoritative six off a short ball raising hopes of Indian fans again but the very next ball was a peach and Rohit heard the death rattle. Top 10 fielders in ICC Cricket World Cup 2015

Dhoni played a feisty knock but even he had a lucky break when Michael Clarke dropped him off an attempted pull shot (Clarke had lost his wicket to that very shot). Barring Smith, both batting line ups performed similarly. It wasn’t like India failed (as is being said in the media), it’s just that Smith was brilliant.

The true test of character is how you perform with odds stacked against you. With the noisy Indian crowd and the pitch offering unexpected favours to the bowlers, Smith had multiple hurdles. He didn’t simply overcome them; he stamped his authority. ICC Cricket World Cup 2015: Complete Coverage

(Rishad D Souza, a reporter with CricketCountry, gave up hopes of playing Test cricket after a poor gully-cricket career. He now reports on the sport. You can follow @RishadDsouza on Twitter) 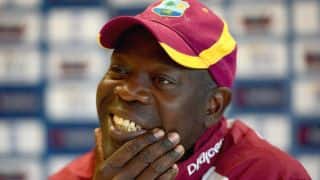