Hafeez's men characteristically lost their nerves, despite being the stronger team on paper.

Unwanted miscommunication in running, dropped catches, wild swings to score runs, Pakistan looked far too edgy despite having a comparatively stronger team than their arch-rivals. Abhijit Banare analyses some key moments of the game which cost Pakistan the match.

It’s getting habitual now. Doesn’t matter how strong the Pakistan side is compared to India, but the psychological battle has always triumphed cricketing skills for Pakistan. Go back to the 2011 World Cup semi-final and you will realise why pressure matters more than skills. But on Friday, there was hardly any pressure in what could be termed as one of the rare low-key Indo-Pak affairs. Captains of both teams had played down the hype saying it’s not going to affect their performance but it seems the statement held true only for MS Dhoni.

With a strong bowling attack and some reliable batsmen, Pakistan had every chance to get the monkey off their back as far as the world cup jinx against India was concerned. But the nervousness was once again evident when they were put into bat. Perhaps their best batsman for a while now, Ahmed Shehzad was clearly off colour going for wild swings and erratic communication with his fellow batsmen. Shehzad’s decision to refuse a single to Kamran Akmal was soo late that another run-out was written all over the place even before Akmal turned back to reach to his crease.

Call it Dhoni’s influence or the big match occasion, Indians have learnt the way to disassociate themselves from pressure and carry on their work in their own zone unlike Pakistan. If you look from the other side, with all the noise from spectators and initial excitement, Bhuvneshwar Kumar too could have easily missed his aim while throwing at the stumps at striker’s end. Sounds exaggerated when you are few feet away with three stumps to aim at but ask Stuart Broad how to miss a run-out standing in front of the stumps.

Even with the bowling changes, Dhoni was much more proactive whereas, Mohammad Hafeez was forced to bring the changes more out of pressure. In other words, the Indians managed to dictate terms all through.

The middle order of Pakistan is aggressive but that only allows more chances to the opposition.

And the dropped catch of Suresh Raina by Shahid Afridi in the 12th over was critical too. Pakistan still had a chance to strike a few wickets then. And it doesn’t help when two of your best pacers release the pressure by being inconsistent. Umar Gul, in particular, has been found wanting in big match situations.

While the Indians were good with their fielding in the circle, Pakistan allowed the Indian openers to pick the quick singles. The openers were aggressive enough to break the shackles with boundaries, but at the same time, drying up the singles can frustrate the batsmen a lot. The same was visible in the unbeaten partnership between Virat Kohli and Raina, where they kept stealing the singles and twos. The duo came together with India struggling after three quick wickets, but they remained unperturbed calmly picking boundaries at regular intervals which kept frustrating Pakistan.

There are more such minor things which make a big difference in the end result of the match. Some of the Pakistan batsmen are as talented as their Indian counterparts, but somehow they manage to allow the pressure to get the better of them. Umar Akmal in particular could have easily made a difference of 15 more runs had he stayed on. The middle order of Pakistan is aggressive but that only allows more chances to the opposition.

Against Australia, Pakistan have a bigger task. Knowing Pakistan’s inconsistency they happen to fire in most unlikely situations as well. With the Indian game behind them, they need to look to return to their natural zone. Even the Aussies would be wary of a strong Pakistan side, but will be well aware of their ability to be in the self-destruction zone as well. 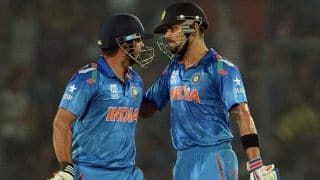