Netherlands scripted a couple of magnificent wins and some close finishes.

Netherlands’ performance in the ICC World T20 2014 has been one of the best underdog tales in recent times — a jaw-dropping chase against Ireland, making South Africa sweat and toil for a win and dishing out a humiliating defeat to England by 45 runs.  The trip to Bangladesh was truly a memorable one for the cricket archives.

In the T20 World Cup’s qualifiers, we saw the passionate Nepal with its colourful fans field a team full of ‘locals’, and the fearless men from the war-strip of Afghanistan already making giant strides in the international arena.

So what was the ethnic make-up of the men in Orange? A captain based out of New Zealand, and the star batsman and bowler hailing from Australia. South Africa-based players formed the rest of the seniors in the team and the unflinching confidence with which they went about facing the big boys commanded respect.

Tom Cooper’s solid displays in the middle-order were a joy to behold. Time and again, Netherlands were bailed out of trouble when the top-order failed and the senior Cooper showed a veteran’s application in the busy nature of which he went about with his business at the crease. Despite Stephan Myburgh stealing the show in the historic chase against Ireland, Cooper’s log hops were brutal and is sure to have a stellar career ahead of him.

Myburgh and wicketkeeper Wesley Barresi also showed the fearless hell-for-leather approach which reaped rich dividends, and underlined the fact that big hitters are the life and blood of this format. Myburgh’s treatment of some of the experienced Ireland bowlers — as if they were a pack of retirement cricketers — is easily one of the tournament’s highlight so far.

Timm Van der Gugten is a pace bowler that some of the top Test-playing nations would have looked at with envy, wishing they had someone like him in their ranks. Van der Gugten’s powerful run-up, 140+ pace and impeccable line was a treat to watch and so were Michael Swart, Ahsan Malik and Mudassar Bukhari; all of whom impressed at different stages of the tournament.

In the past, we have seen associate teams like Canada and United Arab Emirates make up the numbers in the tournament with aging, half-baked portly expatriate cricketers. This is where Netherlands soared in the World T20. Excellent fitness levels — yes, it is a vital element even in a three-hour contest and a team spirit that harnessed unity and cohesiveness with the good old “each one happy for the other’s success” motto on the field.

The capitulation against Sri Lanka to get shot out for the lowest ever T20 total was easily the biggest blot for the otherwise memorable ride for the men in orange in the sweltering heat of the subcontinent.

Failing to finish games where they had their opponents on the mat was another disappointment. Finding themselves in winning positions against Zimbabwe in the qualifiers and South Africa in the group stages, Netherlands will be ruing the missed opportunities in what has potentially been an incredible World Cup story.

As we have seen with an Eoin Morgan and a Boyd Rankin do for Ireland before, the current lot of players may also trade the Orange jersey for a Australian or a South African one. A majority of the players in this team have dual passports and good players are possibly using this opportunity as a stepping stone, as one of their stalwarts, Dirk Nannes was guilty of in the past.

Netherlands missed a world class all-rounder like Ryan Ten Doeschate in their ranks. What they could have gone on to achieve if they had him up and about is a thought only left to the imagination unfortunately. Ten Doeschate recently decided not to play for Netherlands again in an attempt to not damage quality suitors for his services in the future and is a further vindication of Netherlands being a mere platform than a building.

Tim Gruijtens kicked up a storm with a video on youtube, accusing the Netherlands team management of ‘bullying’ him out of the squad in place of Tom Cooper caused quite a stir, and left a bitter taste in the mouth of the backroom staff and the spirit of the game.

When Netherlands pulled of the unthinkable against England in the ICC World T20 2009, many labeled it as a one-off. Five years on, the interest levels back home have hardly raised despite these giant-killing acts.

Most people in the Netherlands didn’t even know or care about their astonishing win against Ireland and Robin van Persie or a Wesley Sneijder’s goal scoring prowess will continue to take center-stage in the football-mad country than the underdog who went toe to toe with the high and mighty of the cricket world. 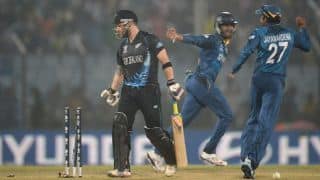