Steyn's heroics against the Kiwis proved once again why he is the world’s best bowler.

South Africa pulled off a nerve-wrecking two-run win over New Zealand in the ICC World T20 2014 to keep their hopes alive of qualifying for the semi-finals. Dale Steyn’s excellent spell and in particular his last over is what helped Proteas pip the Kiwis in the Super 10s. South Africa have a lot of issues to sort out if they are to win the T20 World Cup. But Shrikant Shankar believes they are also lucky to have a fit and raring Steyn in their ranks.

When seven runs are required from six deliveries in a Twenty20 match with five wickets in hand, then one will be inclined to put their money on the batting team to pull off a win. This is also after due consideration as to which bowler will bowl those six deliveries. The point is, one would always back the batting team as the odds are stacked up against the bowling side. But it does not mean that the bowling team cannot defend the score. When it does happen and on those very such rare occasions, it is usually the bowler who gets the credit.

Dale Steyn did exactly that against New Zealand on March 24 to help South Africa clinch a nail-biting victory in the ICC World T20 2014. In fact, New Zealand required 21 runs in 12 deliveries to get a win, chasing a 171-run target at Chittagong. When the two bowlers bowling those last two overs are Messrs. Morne Morkel and Dale Steyn, then it is no easy task for any batsman. But Morne was having an off day and conceded 14 runs in the 18th over. The task seemed simple enough — seven runs in six deliveries. But Steyn had other ideas.

He dismissed Luke Ronchi off the first ball of the 20th over. Nathan McCullum wasted two deliveries trying to smother the deliveries instead of giving Ross Taylor, who was batting on 62 off 36, strike. Nathan connected on the third attempt and got a four over extra-cover. The equation was three runs in two deliveries. Still New Zealand were in a better position. Nathan then mishit a back of a length delivery to Faf du Plessis, who took a brilliant catch diving to his left at cover. One delivery left and three runs to get. Tough ask, but crucially for the Kiwis, Taylor was finally on strike.

Sensing Taylor’s strength in being very strong on the leg side, Steyn bowled one full and quite wide outside off-stump. Taylor’s shot selection proved he was looking for a heave above mid-wicket. But he simply hit the ball back to the Steyn, who ran him out at the bowler’s end. South Africa won a nerve-wrecking contest by a two-run margin. Steyn went on a wild run after that in celebration. South Africa had snatched victory from the jaws of defeat. Normally it is the other way round. The win keeps their hopes alive of reaching the semi-finals of the T20 World Cup.

South Africa had already lost a close match against Sri Lanka. They would have been in deep trouble if they did not get a win immediately. The Proteas are not the main favourites to win the tournament. They are lacking in many areas and rely heavily on a select bunch of players. Although Hashim Amla has been scoring, it is coming at a strike-rate not fast enough in T20 cricket, especially as an opener. Quinton de Kock is very young and is a huge promise. But the captain du Plessis and David Miller have not contributed much lately. One cannot expect Albie Morkel to produce the goods in a span of seven-eight deliveries every time.

Their bowling attack also relies too much on Steyn and Morne. Lonwabo Tsotsobe, Imran Tahir, Aaron Phangiso and Beuran Hendricks are not someone they can rely on in the last two overs. If either Steyn or Morne has an off day, like it was against New Zealand for the latter, the other has too much on his shoulders. But Steyn has proved himself to be the best bowler in world cricket for the last six years; and he used all his experience to pull off the victory for South Africa. It is easy to say that one should bowl six yorkers on the trot at the base of middle-stump, but the batsmen are prepared for those deliveries.

Taylor is one of the best at hammering a straight yorker over the boundary on the leg side. Steyn bowled one wide and Taylor was reaching out to play at it rather than connecting well. If Taylor played a lofted cover drive and got a four or six, then Steyn might have been criticised for not bowling one on the stumps. But there is more to end-overs bowling than just yorkers. He outsmarted a well-set batsman in Taylor and won the match for his team. And it is for this reason, South Africa are lucky to have Steyn. There were issues relating to his fitness before the tournament. But he has managed to keep his fitness and that is very important for South Africa.

In the end, Steyn conceded only 17 runs in his four overs and took four wickets in a match where the runs were scored at almost nine runs an over from both the sides. If South Africa do manage to beat England and the Netherlands and qualify for the semi-finals, it is Steyn they would have to thank. 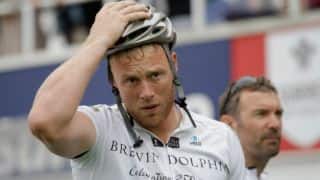