Coming into the tournament, England, New Zealand, and Australia (as always) were hailed as favourites, and India Women beat all three of them en route the final.

They won hearts, probably more than they would have imagined, but India Women fell one step short of the title. Coming into the tournament, England, New Zealand, and Australia (as always) were hailed as favourites, and India Women beat all three of them en route the final. They have almost certainly outdone themselves. Whether this performance will trigger the dawn of a new era in women s cricket in India is something only future will tell. As of now, these are marks out of 10 for the entire team in the tournament. READ: The dawn of the new Eves

Harmanpreet played probably the greatest innings in the history of India Women to knock Australia out of the tournament, but there was more to her than that. She had scored 60 in the must-win match against New Zealand, got another 51 in the final, and had three brisk cameos earlier in the tournament.

It does not end there. She bowled at crucial junctures and took important wickets. And she ran Heather Knight out brilliantly in India s first match.

Deepti is 19. She fields with the agility of someone her age. With bat and ball, however, she has been as mature as anyone in the side. She has bowled slow and straight, not experimenting too much, and curbed her natural instincts to play second fiddle as and when needed. Only Dane van Niekerk and Marizanne Kapp had more wickets in the tournament.

And then, there was her fielding. She ran out Katherine Brunt with spectacular direct hits twice in the tournament. A third direct hit had got rid of Beth Mooney in the league match against Australia. She caught Nicole Bolton brilliantly in the semi-final off her own bowling. And I am not even listing the innumerable runs she has saved…

If India had to choose one spinner from the tournament, it has to be Poonam. Her short frame meant that she had flight the ball to find a length. She did that beautifully, often tossing it above eye-level, luring them out and making them succumb. And as the batters grew more and more circumspect, she ran through the overs without getting hit.

Her economy rate of 3.86 was the best in the tournament among those who had bowled 70 or more overs. And when she got hit, she bought important wickets.

It is difficult to tell whether Rajeshwari could have had a greater impact had she played earlier in the tournament. However, there is no doubt that she did the most out of the opportunities she got.

Raj was picked for three must-win matches. With 5 for 15, she sent New Zealand packing for 79. The Australians obviously went after her (they were chasing 282 in 42 overs). She went for runs but got Elyse Villani, ending a stand that threatened to take the game away from India. And in the final she came on inside the first 10 overs and broke the first-wicket stand with some intelligent bowling.

Mithali finished a solitary run behind Tammy Beaumont, the leading run-scorer of the tournament. Had it not been her, India would probably not have beaten England and New Zealand in the league stage. True, she has been blamed for slow batting during some of her innings, but she was often left without support.

However, she should receive flak for negative captaincy at times when she left the game drift away though she was spot on in the final. She loses a point for that mysterious run out in the final.

Jhulan improved in leaps and bounds as the tournament went on. Her figures stood at 13-0-76-0 after two matches. Take these out, and they read 54.1-7-190-10. She peaked when it mattered most, when she tore the heart out of the English batting line-up in the final, proving why she is still considered India s most dangerous bowler.

However, her performance in the semi-final was no less: defending an asking rate of 6.67 she had figures of 8-0-35-2, which included the ball of the tournament to castle Meg Lanning. She also ran out Jess Jonassen cleverly.

Her runs mostly came in a valiant effort against South Africa. Of non-wicketkeepers, only Amy Satterthwaite (8) held more catches than her 7.

Punam, hailed as India s comeback queen, did not disappoint. Gritty and firm, she made sure she held the fort as Smriti Mandhana failed time and again. She played the foil to the strokeplayers, a role that certainly affected her strike rate. She was also dependable in the field, raising the bar higher in the final.

A pesky livewire behind the stumps, Sushma had 15 dismissals in the tournament. To put things into perspective, Alyssa Healy came second with 8, and nobody else had more than 7 which meant that Sushma had at least as many dismissals as any two wicketkeepers put together. Barring the odd lapse she was generally immaculate.

Sushma also came into the tournament with a batting average of 2 (no, I did not omit a digit), but once there, she led the Indian resurrection against Pakistan, helping them reach 169 for 9 after 111 for 6.

Of course, there will be points for the post-match groupfies (one for every win) she clicked, but this piece will not be complete without that.

India s finest all-round fielder lived up to her reputations, flinging herself on the ground and pulling off spectacular saves. She also did her bit with bat, especially during her 45-ball 70 in the New Zealand match. She also played two cameos in the knockout matches. However, she loses half a point for throwing her wicket away in the final.

Smriti started the tournament by bludgeoning England for a 72-ball 90. Against West Indies she got a hundred. It all ended there, for her next 7 innings amounted to 36 runs. One should not read too much into this, for Smriti has actually seldom looked uncomfortable at the crease. She perished going for her strokes almost every time: her strike rate will bear testimony to that. Her time will come.

Additionally, despite her injury, she fielded quite well, the highlight being the run out of Stefanie Taylor.

Ekta took 9 wickets, but that included 5 for 18 against Pakistan, who were never really much of a threat. Her other quality spell came against West Indies. Before that, she also played a crucial role against England with ball, and pulled off a superb throw to run Fran Wilson out. Unfortunately, Sri Lanka sorted her out, and she was left out after twin failures against South Africa and Australia.

The final was a match Shikha will want to forget. She failed with ball and had a terrible brain-freeze when she batted. She was dropped after two ordinary matches, but came back to replace Mansi and did splendidly ever since. In the next four matches (before the final) she had figures of 30-4-89-4. Unfortunately, she did not quite live up to the all-rounder s reputation.

Mona batted twice and failed only once, but that was the time when India needed her to deliver. The team probably expected better than a 35-ball 6. However, she ran out Jenny Gunn brilliantly in the league match. That will fetch her half a point.

Mansi played two matches, against the two weakest teams of the tournament. She took a quick 2 for 9 against Pakistan but was thrashed by the Sri Lankans. She gets half a point for running out Ama Kanchana with an excellent throw.

Nuzhat Parween did not play a match, which makes her ineligible for points. 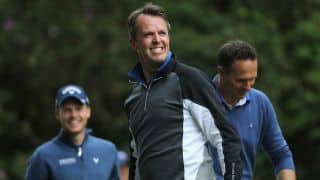