At 21, Rishabh Pant’s cult status on the rise

At 21, Rishabh Pant’s cult status on the rise

Pant is a product of the modern age, mature beyond his years and benefitting immeasurably from the wonderful counsel of Rahul Dravid.

Rishabh Pant had quite an eventful Australia debut. In his maiden Test appearance in the southern hemisphere, he played two important cameos, equalled the India record for most catches by a keeper in an innings, and finished off the match with 11 catches, the joint-highest in Test history alongside Jack Russell, the Englishman, and explosive South African AB de Villiers.

And yet, it is for his motor mouth that Pant is gradually attaining cult status.

With Cricket Australia’s new broadcaster partners pulling out all stops to offer viewers a completely unique experience, stump mic snatches are, from time to time, being aired live as the on-air commentators go silent. During one such experiment, Pant had a friendly go at Pat Cummins on the final day of the Adelaide Test on Monday (December 10), even as India were closing in on an historic victory.

ALSO READ: Pant takes over commentary as he sledges Cummins

Impeccable English may not be the Delhi youngster’s strongest suit, but that didn’t hold him back with R Ashwin wheeling away, trying to breach Cummins’ obdurate defence.

“C’mon Patty, not easy to play here, man,” he started off, as the India offspinner prepared to send down the 76th over of the innings.

“C’mon, it’s not easy to survive,” was the expert analysis as Cummins plonked his left foot forward to keep the first ball away.

“Not putting away bad balls here,” Pant offered, unwittingly sledging his own bowler, after Cummins offered no stroke to a delivery pitched outside off.

For the rest of the over, Pant offered various pieces of advice that Cummins, somehow keeping a straight face, managed to ignore. By the end of the over, the commentators were in splits as they resumed charge of the mic, while the viewers felt a little short-changed that their entertainment had only lasted six balls.

Entertainment and Pant, however, go hand in glove, no pun intended. The diminutive left-hander is a fearsome destroyer of bowling attacks, who already has one century and two identical scores of 92 in 10 Test innings. Of his 399 runs, 264 have come off boundaries – 45 fours and 14 sixes. His first scoring stroke in Test cricket was a second-ball straight six, off Adil Rashid in Nottingham. He is quite the intrepid force in front of the stumps, but sometimes, it’s as if he is too smart/talented for his own good.

Pant is only 21, but the usage of ‘only’ has to be tempered by the fact that he has already played 29 first-class games, 37 List A matches and a staggering 61 Twenty20 encounters. He is a product of the modern age, mature beyond his years and benefitting immeasurably from the wonderful counsel of Rahul Dravid in the latter’s capacity as the India A and India Under-19 coach.

One of Dravid’s unshakable convictions is not to tinker with his wards’ natural strengths. The former India skipper has no desire to produce clones different to each other only in name. He encourages youngsters to remain true to themselves, but to amalgamate their inherent skills with a commonsense, high-percentage approach. Pant’s first-class average of 51.02 might point to strict adherence to the Dravid school of man-management, but some of the strokes he has attempted in the more demanding cauldron of Test cricket affirm that he has a long way to go before being even spoken of in the same breath as Adam Gilchrist, his acknowledged hero with whom he has already attracted inevitable but unfair comparisons.

One of the examples of his naivety, if you like, came in the second innings in Adelaide. With Nathan Lyon looking to impose himself on the Indians following the dismissals in quick succession of Cheteshwar Pujara and Rohit Sharma, Pant shed the shackles with three fours and a six off consecutive deliveries. With the lead mounting, Tim Paine spread his field. Pant would have been better off milking the bowling, but he couldn’t restrain himself. In the next over, as Lyon tossed one up, Pant took on the challenge; attempting to clear mid-off, however, he only managed an outside edge that flew to deep cover. It wasn’t the dismissal so much as the manner of it that rankled, but Sanjay Bangar was quick to defend his star-in-the-making.

“You will be surprised that he is a pretty mature player. In one of the home Tests against Windies, he played differently,” the assistant coach told an Australian reporter who was aghast at Pant’s approach. “He is capable of playing both games – attacking and otherwise. For somebody who is just starting his career, he is an exciting prospect to have.

“We expected that with time and with a better approach and calculation tactically, he could have done better,” Bangar grudgingly agreed on further prodding if prudence wouldn’t have been the saner option in the Adelaide second dig. “But you don’t want to take the fearlessness away from him otherwise. It’s a mix of aggression and caution, and I think with time, he will develop that.”

That, and Bangar might have said, his keeping, too. That might seem an odd remark, given his world record-levelling exploits, but Pant has plenty of distance to traverse if he is to set stall as a quality international stumper. Admittedly, it is only recently that he has started keeping regularly to the likes of Ashwin and Ravindra Jadeja, and he will get better with time. But for now, particularly standing up, he is very much work in progress.

Pant’s elevation to the Test ranks came because Wriddhiman Saha was out injured, and Dinesh Karthik played himself out of contention with two horror games at the start of the England series. Parthiv Patel, who debuted at Trent Bridge in 2002 when Pant was four and a half years old, is the reserve keeper on this tour. The world is the oyster for the gifted talent from Delhi, but only if he doesn’t snatch at the pearls in a hurry. 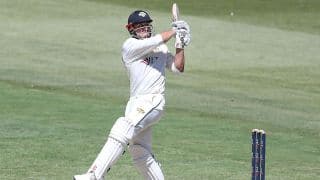 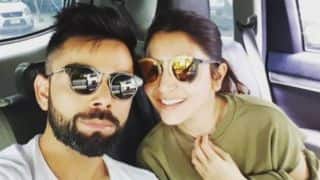 Kohli, Anushka give up their business class seats to India pacers to offer ‘more comfort’