India lost the fourth ODI against Australia at Canberra despite being in a commanding position.

India were cruising to a win in the fourth One-Day International (ODI) before Australia clawed their way back and registered a 25-run win. India have been in similar situations before, where they were handed the task of chasing down huge scores and have come out in flying colours. The only difference perhaps was that it was that the entire team rose to the occasion and ensured that India got over the line. In all of the successful run chases in the recent past, Virat Kohli has been India’s star. Before the Kohli era, there was one particular run chase that will always be memorable. Full Cricket Scorecard: India vs Australia 2015-16, 4th ODI at Canberra

India needed 326 to beat England in the NatWest series final in 2002. About 15-20 years back, when scores around 270 or 280 were considered match-winning, 326 was termed impossible. India however took it on and chased it down in one of the most dramatic finishes.  While Gurkeerat Singh and Rishi Dhawan were the new players in the current side, it was Mohammad Kaif and Yuvraj Singh, who had just burst into international cricket back then. After an excellent opening stand between Sourav Ganguly and Virender Sehwag, the middle-order collapsed. Kaif and Yuvraj put on 121 for the sixth wicket, which gave India some hope. Harbhajan Singh played sensibly and put on a partnership close to 50 after Yuvraj fell. In contrast, at Canberra, Umesh Yadav kept swinging the bat, hitting everything but the ball. Full Cricket Blog: India vs Australia 2015-16, 4th ODI at Canberra

In the Canberra ODI, things were much easier. Two top-order batsmen scored a century and India needed just run-a-ball when Shikhar Dhawan was dismissed for 126. But the Indian batting folded without giving any fight as they managed to add a further 46 runs and lost nine wickets along the way and fell 25 runs short. India were sailing, just like they were in the in the Jaipur ODI in 2013 against the same opposition, where they chased down 360 without breaking a sweat  or the Hobart ODI against Sri Lanka in 2012, where India not only chased down 320, but also did it within 40 overs to earn a bonus point.

The chase went according to plan when Kohli scored his highest score of 183 in an Asia Cup group stage match against arch-rivals Pakistan in 2012 at Dhaka, to help India chase 330 down with no hassles. The one thing that that is common in all these matches is Kohli getting huge tons. He is indeed the best batsman in the world when it comes to chasing. The fact that he has scored 15 out of his 25 centuries in the second innings, bear testimony to the fact as to how good he is when it comes to chasing.

The Canberra ODI should have been too should have been won easily after the platform was laid. It should have ended like the games in Jaipur, Hobart and Dhaka, but it turned out to be heart breaking and disappointing like the Adelaide Test, played at the end of 2014. Chasing 364 for a win with one full day to play, India under the leadership of Kohli went all guns blazing in chasing the total down.  However, India had lost Dhawan and Cheteshwar Pujara with just 57 on the board, as a result the burden fell on Kohli and opening batsman Murali Vijay to steer India clear of trouble. They did not disappoint as 185-run stand for the third wicket had out India in the driver’s seat. Once Vijay was dismissed on 99, wickets kept tumbling and despite Kohli’s 141 in the second innings, to go with 115 in the first, India fell short by a mere 48 runs. India’s middle and lower-order did not click once again and the lost a match from the cusp of a victory. READ: India vs Australia 2015-16, 4th ODI at Canberra:  Highlights

India had a golden chance to win the fourth ODI and at least get off the mark in the series and the year. But some senseless batting ensured that Kohli and Dhawan’s excellent knocks went in vain. India have chased down mammoth totals not so long ago, but it took a certain amount of team work and did not depend on one or two individuals. But it does show that Indian cricket team is not learning from its mistakes in the past. India should keep that in mind as they play for pride in the fifth ODI at Sydney. 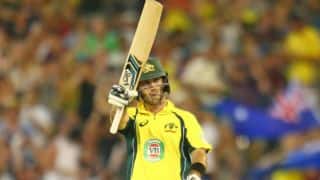