For Australia, Pat Cummins had yet another decent time with the ball. Zampa was expensive but it was his wickets which won them the game. Jhye Richardson impressed one and all and justified his selection. Stay tuned for the presentation in a while…

Australia though did not let the lost momentum effect them as they came out all guns blazing with the ball. Pat Cummins and Jhye Richardson were exceptional with the new ball as they dismissed the top order within Powerplay 1. Dhoni and Kohli then played themselves in and steadied the ship with a 59-run stand. However, the former was dismissed just as he started to get going. Jadhav then came out and it is his partnership with Kohli which brought India back in the game and changed the momentum. The two added 88 in 75 balls and revived hopes in the Indian camp. However, just as the tide seemed like turning in the hosts favor Zampa struck. Kohli though continued, he along with Vijay Shankar built yet another 45-run stand with the skipper getting to his ton. The two were going great guns but it was once again Zampa, who got rid of the Indian skipper. Shankar then along with Jadeja did try to fight but the task was a very difficult one and in the end the Indians fell short quite comfortably.

THE SERIES IS STILL ALIVE! Australia have managed to make it 2-1. A very convincing performance by them. After quite a few matches one cay say the Aussies have put up a good performance with both, bat and ball. They were inserted and their openers came to the fore adding a massive 193-run stand. Usman Khawaja was the star as he scored the ton. They though did not end their innings with the bat with momentum on their side but still set a good enough target of 314 for the Indians.

THE SERIES IS STILL ALIVE! Australia have managed to make it 2-1. A very convincing performance by them.

3 wickets for Pat Cummins. Pat Cummins is on a roll. 10 wickets down for IND. Out batsman is Kuldeep Yadav. It is all over for IND.

9: 00 pm IST: Superb over from Jhye Richardson. Just three off it as Ravindra Jadeja is struggling to deal with the run-rate. India 263/7, need 51 off 24 balls.

8: 49 pm IST: Vijay Shankar’s enterprising innings of 32 off 30 balls comes to an end. He had already taken nine runs off Nathan Lyon’s over but went for another big one and is caught at deep midwicket by Jhye Richardson. India 251/7 in 43

8: 25 pm IST: What a comeback this from Adam Zampa. After being hit for two fours, Zampa breaches Kohli’s defences. The Indian skipper goes for 123, but has he set up the game for his team, or can Australia claw back? Zampa gets the man Australia desperately wanted. Zampa is pumped up. He has got all the three big wickets, first Dhoni, then Jadhav and now Kohli. Once again it is the full ball which does the trick for him. It lands on leg stump, Kohli looks to flick but misses. The ball kisses the leg pole. India 219/6 in 37.3

8:00 pm IST: OUT! LBW! Stun silence here in Ranchi. Tossed up delivery on off, Jadhav looks to sweep but misses and gets hit right in front. Zampa thinks he has got his man and the umpire agrees with him and shows Jadhav the dreaded finger. A very unnecessary shot at this stage of the game. He thinks about the review for a minute but Kohli reckons he is a goner so Jadhav walks back

7: 49 pm IST: Virat Kohli is now third on the list of most ODI runs for India. He is now only behind Sachin Tendulkar and Saurav Ganguly.

7:09 pm IST: WICKET! MS Dhoni tries to goes for the big one, but has yorked himself. Adam Zampa with the wicket. He goes for 33. Is this the last ODI innings of the great man at his hometown of Ranchi?

6:50 pm IST: 4000 ODI runs as captain for Virat Kohli. He reaches there in 63 ODIs, the quickest as the skipper and MS Dhoni steady India after the early jolt. India 63/3

6: 12 pm IST: WICKET! Peach. Absolute peach. Length delivery pitching on middle and off. It hits the surface and moves away slightly later on. Rayudu is beaten all ends up as he looks to defend. The ball hits the off pole and Rayudu has to walk back. That ball was unplayable. India are in deep, deep trouble here. India 27/3

6:04 pm IST: India have been jolted early. Par Cummins gets the ball to jag back in and Rohit Sharma is trapped in front. The on-field umpire’s initial decision was not out, but Australia took the review and the review had the ball hitting the pad first and Rohit had to depart. Walking back he was still in disbelief. India 15/2

5:56 pm IST: That’s stunning catch by Glenn Maxwell at backward point. Made it look so easy, and that is the hallmark for a good fielder. Shikhar Dhawan slashed at a wide one but couldn’t get it past Maxwell. He goes for one, Jhye Richardson with the wicket and he has not conceded a single run in his two overs. India 11/0 in 4

5:45 pm IST: India’s chase underway. Shikhar Dhawan and Rohit Sharma out in the middle for India. Pat Cummins has the new ball for Australia

5: 07 pm IST: So Australia finish at 313/5 at Ranchi. Marcus Stoinis (31*) and Alex Carey (21*) got together for a stand of 50 runs to take Australia to past the 300-run mark. Glenn Maxwell’s breezy 47 off 31 threatened to take the total near to 350, but Ravindra Jadeja and MS Dhoni’s smart work in the field curtailed Australia and aided by some good death bowling, India managed to restrict Australia.

4: 57 pm IST: Good death bowling this from Jasprit Bumrah and Mohammed Shami. Marcus Stoinis and Alex Carey have not been able to get going in the final overs

4: 36 pm IST: Two in three balls for Yadav and all of a sudden, half the side is back in the hut for Australia. Third for Kuldeep. Handscomb bags a duck. From 258 for 2, Australia are now 263 for 5. The leg spinner outside off, it pitches and then turns back in. PH looks to flick but misses. It hits him on the front pad. An appeal follows and the umpire raises the finger. Can India now keep Australia under 300? Now then… Hawk Eye shows the ball to be going over the stumps. No reviews left though for the Aussies.

4: 35 pm IST: Another one bites the dust and Australia are losing their way here! Marsh is the man who is walking back. He uses his feet but does not get to the pitch of the ball. He still goes ahead with the shot but does not get the elevation he would have liked. Ends up hitting it flat towards long on. Shankar there runs to his right and takes a neat catch.

4: 25 pm IST: Maxwell is short! The Big Show has been run out. The last thing Australia would have wanted. But what brilliance first from Jadeja and then from Dhoni. Especially on a day where India have been lackluster in the field. Kuldeep bowls it short and outside off, Marsh goes back and slaps it hard towards cover and sets off for a run, thinking there is at least a couple on offer. Jadeja though first dives to his right and stops it, not cleanly but he recovers well and fires the ball to the keeper. Dhoni nonchalantly flicks it onto the stumps and appeals. The umpire takes it upstairs and replays show that Maxwell has to take the long walk back. Australia 261/3 in 43

3:42 pm IST: That’s a maiden ODI hundred for Usman Khawaja in the his 24th ODI. He was bee nin good nick through series and deservedly gets to the elusive landmark. Glenn Maxwell, at the other end, is tonking it really well. Australia 232/1 in 37 overs

3:42 pm IST: Finally breakthough for India as Kuldeep Yadav traps Aaron Finch in front for 93 off 98 balls. Stock delivery from the left-arm spinner, but the ball hurried through and stayed a bit low and thudded on to the pads in front of the stumps. Finch went for the review after deliberation with Usman Khawaja, but a wasted one in the end. A stand of 193 for the opening wicket comes to an end. In walks Glenn Maxwell. Australia 193/1 in 31.4 overs.

3:16 pm IST: Superlative start by Aaron Finch and Usman Khawaja. Australia are 156/0 in 25th over. Finch is on 77, Khawaja on 75 and they have set their team for a target of anywhere near the vicinity of 320.

2:33 pm IST: Aaron Finch and Usman Khawaja have started to dominate as India struggling without Shami. Kedar Jadhav’s first over goes for 13 runs. Finch on to 39 while Khawaja move to 43. Australia 88/0 in 15 overs

2:00 pm IST: Mohammed Shami was hit flush on his chin by Aaron Finch and he has to walk off. Promting Virat Kohli to bring in Ravindra Jadeja in to the attack and Usman Khawaja takes two boundaries off the over. But, Shikhar Dhawan also dropped the left-hander when he attempted a reverse sweep. AUS 34/0 in 7

1:55 pm IST: Only 20 on the board in five overs, but both Aaron Finch and Usman Khawaja has are hitting ball really well. Indian fielding have been top class. AUS 20/0 in 5

1:39 pm IST: Aaron Finch was up and running with two boundaries of Jasprit Bumrah, one backward punch towards extra cover ropes and then one upplishly behind square, but Bumrah came back well with a one nipping back in; huge appeal ensued and India took the review challenging on-filed umpire’s not out call, but lose their review. AUS 14/0 in 2

1:33 pm IST: And we are underway! Mohammed Shami with the first over and even though he started off well with a full length delivery to AAron Finch for a single, before squaring up Usman Khawaja with a peach of a delivery. But he gave away a boundary to Khawaja. Aus 6/0 in 1

12:50 pm IST: If Cricket Australia [CA] has the Pink Test and Cricket South Africa has the Pink ODI , the Board of Control for Cricket in India (BCCI) will from Friday s Ranchi ODI have one game every calendar year when the Men in Blue will wear camouflaged caps as they look to pay tribute to the Indian Armed Forces. The move has been mooted by none other than Lt. Col. MS Dhoni (he s with the Territorial Army) and current skipper Virat Kohli.

11:30 am: Hello and welcome to our coverage from the third ODI between India and Australia to be played in Ranchi. The hosts have a 2-0 lead and a win today will seal the series in their favour whereas the tourists are in a must-win situation to keep the five-match rubber alive.

India need a win to wrap up their fourth straight bilateral ODI series and fifth competition in a row if you count the Asia Cup while Australia are in a must-win situation to avoid a seventh consecutive series defeat.

Since losing to England 1-2 last summer, India won the Asia Cup and then beat West Indies, Australia and New Zealand to underline their tag of No 2 team in ODIs. Australia, in stark contrast, have not won an ODI series since January 2017. Their ranking of sixth achieved in November is their lowest in three decades and defeat to India in Ranchi on Friday will further add to their problems. Click here to read more

Stat Attack: Milestones loom for Kohli, Dhoni and others

Quote: Shankar could be the batting allrounder India needs – Gavaskar

Quote: Dhoni should continue after WC, Jadeja should be dropped – Ganguly 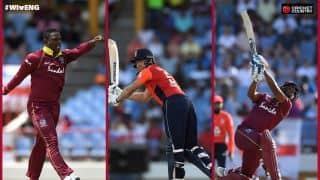