Australia won the second One-Day International (ODI) of the triangular series against India by four wickets. Rohit Sharma scored a magnificent century but unfortunately that wasn’t enough to secure a win for India. Pramod Ananth lists the highlights from the game.

Mitchell Starc’s wicket in the first over: Just like he did against England two days ago, Mitchell Starc struck in the very first over of the match as he sent Shikhar Dhawan back to the pavilion for just two. After having an ordinary Test series, Dhawan will feel the pinch at having been dismissed early.

Rohit-Raina partnership: Suresh Raina received a lot of stick for his pathetic performance in the fourth and final Test against Australia at Sydney, where he was out for a pair. Raina however managed to redeem himself and prove to his doubters that he is amongst the best in the shorter format. He made an important 63-ball 51 and stitched a 126-run stand for the fourth wicket with Rohit Sharma, which gave India a platform to get a big score.

Rohit Sharma’s sixth ODI century: Rohit got the chance to open the innings with Shikhar Dhawan and he made the most of this opportunity as he made an excellent century that propelled India to a fighting total of 267 for eight in 50 overs. Although India didn’t win the game, he has certainly proved that he is an asset to the team right on top of the order.

India’s collapse at the end: Rohit Sharma and Suresh Raina’s partnership had put India in a good position. Rohit and skipper MS Dhoni then put on 52 for fifth wicket, but as soon as he got out India collapsed. From 235 for four they only managed to get 267 for eight in their quota of 50 overs. Dhoni’s wicket at that stage was priceless for Australia.

Mitchell Starc’s career-best figures: Starc scalped six Indian batsmen to get his career-best figures of six for 43. He got four wickets in the first ODI against England and has a total of 10 wickets from two games in this series already. Just like in Sydney, Starc walked away with the man of the match award this time as well.

Australia’s brisk start: Australia got off to a good start to their run chase thanks to some good hitting by openers Aaron Finch and David Warner. Warner, coming off the back of a superb century against England in the first ODI and his contribution of 24 from 22 balls ensured that Australia reached 50 in the ninth over, which reduced the pressure on the batsman to follow.

Aaron Finch’s partnerships with Shane Watson and Steven Smith: Although Shane Watson has not been in the best of form, he showed no signs of discomfort while he was batting. He scored 41 from 39 balls and put on a 64-run stand with Aaron Finch and did not let the initiative slip even after Warner’s dismissal. After Watson got out, the in-form Steven Smith walked in. He made a cautious start, but once he got his eye in he started to take on the bowlers. His 101-run partnership with Finch was crucial as Australia were comfortably placed to achieve the target of 268. In total the partnerships cost 165 runs, which took the match away from India.

Australia lose wickets in quick succession:  From 216 for two, Australia lost four wickets and found themselves in a spot of bother at 248 for six as they lost wickets of Smith, Finch, skipper George Bailey, and Glenn Maxwell. India were right back into the game for a brief period after that. 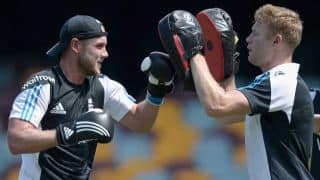