After the controversy surrounding the Bengaluru Test, cricket will finally take centrestage as India take on Australia in the third Test at Ranchi.

After the controversy surrounding the Bengaluru Test, cricket will finally take centrestage as India take on Australia in the third Test at Ranchi, all set to become India s 26th Test venue. A win for Australia will ensure they retain the Border-Gavaskar Trophy irrespective of what happens in the final Test at Dharamsala. However, India need to ensure that they do not lose this Test, if they are to keep their hopes of regaining the Border-Gavaskar Trophy alive. Australia suffered a major blow when they learnt that their premier fast bowler Mitchell Starc was ruled out of the series due to an injury. They have called up Pat Cummins as Starc s replacement. Cummins may even feature in the XI despite Jackson Bird being in the squad. Full Cricket Scorecard: India vs Australia 3rd Test at Ranchi

Mitchell Marsh has also returned home due to injury. India, on the other hand, got a major boost as opener Murali Vijay was declared fit, and is all set to play his 50th Test. Vijay was replaced by Abhinav Mukund in the second Test, but if fully fit he should open the innings for India along with KL Rahul on Thursday. Let us now have a look at the teams both India and Australia are likely field for the crucial third Test at Ranchi in detail:

Top-order: Matt Renshaw has been in extremely good form on this tour so far and he will open with David Warner, who is due a big innings. Once Warner gets going, it is always difficult to stop him. At No. 3 it will be skipper Steven Smith, who has been Australia s best batsman so far. His century at Pune had helped Australia take a 1-0 lead in the series. With 172 runs at 43, Smith will be key to Australia s success. Kohli, Smith and DRS controversy in IND vs AUS, 2nd Test: As it happened

For India, Vijay will open the innings with Rahul, who has been in excellent form. Rahul has struck 3 fifties in 4 innings so far, and is the leading run-scorer with 215 runs in this series. Rahul will be disappointed not to have converted his fifty into a hundred even once something he was good at doing during his initial Tests. The combination of a fit Vijay and an in-form Rahul will be a treat to watch once they get going. The ever-dependable Cheteshwar Pujara will walk in at No. 3. Pujara played a crucial innings at Bengaluru, scoring 92 in the second innings to bring India back into the game. He will look to carry his good form into this match as well.

Middle-order: Shaun Marsh played beautifully in the first innings at Bengaluru. His innings played a major role in ensuring Australia took a healthy lead. Marsh is one of Australia s best batsmen in the subcontinent, and will want him to get a big score, once he gets off to a start. At No. 5 will be Peter Handscomb, who has been a revelation in Australian cricket ever since his debut in December last year. However, he has not fired in this series so far. With the sort of talent Australia have in their squad, this match could be Handscomb s last chance to make a substantial contribution. Dear Australian media, aren t bullies better than cheats ?

The No. 6 spot is up for grabs. There will be stiff competition between Glenn Maxwell and Marcus Stoinis for the spot after Mitchell Marsh returned home due to injury. Maxwell has the experience of playing a lot more in India including 2 of his 3 Tests and is more likely to get the nod ahead of Stoinis. Maxwell can also bowl useful off-spin, and can be thrown into the mix along with Nathan Lyon and Steve O Keefe. An excellent gloveman, Matthew Wade showed glimpses of his batting abilities with his first-innings 40 at Bengaluru.

Virat Kohli will bat at No. 4 for India. In the press conference ahead of this Test, Kohli made it very clear that both he and his team aim to do well for the remainder of the series, leaving the entire DRS saga from Bengaluru behind. Kohli has scored just 40 runs from his 4 innings at 10 so far in this series numbers that give you a wrong indication of what a wonderful home season he has had so far. Why Virat Kohli represents the young India

Ajinkya Rahane scored a crucial 52 in the second innings at Bengaluru, adding 118 for the fifth wicket with Pujara. Many, including the Indian captain, believe that this partnership turned the game in the hosts favour. However, just like Australia, India too have a No. 6 conundrum. The first will be to determine whether India want to play three spinners or two. If they decide to play three spinners, it is likely that Jayant Yadav will come in place of Karun Nair. If that happens, either Wriddhiman Saha or Ravichandran Ashwin will bat at No. 6.

But Karun s presence will give India some more depth in their batting. He scored 26 in the first innings at Bengaluru but was dismissed for a golden duck in the second. Kohli will be tempted to bring Jayant back into the mix, who is also a more than handy batsman.

Bowlers: With Starc out, it will be toss-up between Cummins and Bird to make the cut to partner Josh Hazlewood. Cummins played his only Test six years back against South Africa at Johannesburg. His 7 wickets on debut, including a spell of 6 for 79, had won him Man of the Match. Injuries have kept him out of returning in the longest format, but this can be his chance to shine under tough conditions in India. Bird last played in the Boxing Day Test against Pakistan, but was dropped for the next Test as Australia decided to play an extra spinner at Sydney. Both bowlers are in good form and will be interesting to see who gets the nod.

With 28 wickets between them in the series, Lyon and O Keefe will be crucial in this Test. Lyon picked up 8 wickets in the first innings at Bengaluru, but was poor in the second innings as he was suffering from a finger injury, while O Keefe got 12 wickets at Pune. If Lyon in unfit, Australia have the likes of Ashton Agar and the uncapped Mitchell Swepson.

Ishant Sharma has picked up just a couple of wickets so far in this series, while Umesh Yadav has scalped 9. Ishant had a relatively long injury layoff, but has been part of India s XI since the fifth Test against England in Chennai. Since his return he has managed just 8 wickets, which includes going wicketless in the first Test of this series in Pune. Depending on the pitch, Kohli might be tempted to bring Jayant in place of Ishant as well (retaining Karun), with Umesh being the lone fast bowler.

Ashwin and Ravindra Jadeja will continue to lead India s spin attack. Ashwin was quite ordinary in the first three innings of the series, but returned to his best, picking up 6 wickets in the second innings at Bengaluru. He is level with O Keefe with 15 scalps as the leading wicket-taker of the series. Jadeja is not far behind with 12. 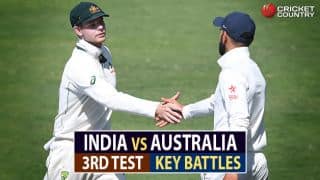