The tendency to pigeonhole players might have cost Kuldeep the odd Test here and there, but he will become a permanent fixture in the Test team.

SYDNEY: His action can t be likened to a frog in a blender, like Paul Adams was in the second half of the 1990s. His bowling too can t be likened to the South African wrist-spinner s, because while Adams provided mystique with his craft and novelty with his unique action, he quickly lost his aura and confidence once batsmen looked past his action and focussed on his bowling.

It can be safely assumed that Kuldeep Yadav won t go the Adams way. Apart from the fact that he also practices the still relatively uncommon art of left-arm leg-spin, there is little that is similar between the South African who faded away rapidly, and the young Indian who has rapidly established himself as one for the long haul.

The tendency to pigeonhole players might have cost Kuldeep the odd Test here and there, but there is no doubt that, in time to come, he will become a permanent fixture in the Test team as well. For now, he is third in the pecking order behind virtuoso finger spinners R Ashwin and Ravindra Jadeja, but even in his six Tests thus far, he has shown that there is more to him than a white-ball exponent. And, that he is as much at home in the longer format where batsmen have more time than in limited-overs cricket where the propensity to go for strokes has played into his gifted hands.

The ongoing Pink Test at the SCG is only Kuldeep s second outside the sub-continent, but in another telling reflection of the strides he has taken in top-flight cricket, he turned in a masterful performance to register his first overseas five-for. On a track still good for batting as late as on day four, he got the ball to go this way and that, the changes to the angle of release and the position of his wrist so subtle that a majority of Australia s batsmen couldn t figure out which one was going to slide away and which one would turn back in.

It was against Australia, in Dharamsala in March 2017, that Kuldeep made his Test debut. Immediately finding the bounce there to his liking, he picked up four wickets in his first bowl, including David Warner with a flipper which he had learnt from his idol, Shane Warne. Did you see the first wicket? he had beamed that evening after having the opener caught at slip by stand-in skipper Ajinkya Rahane.

It was a flipper which I learnt from Shane Warne. Learning from Warne and then getting his countryman out is a great thing. My idol was Warne and I have followed him since childhood. I only watch his videos and it was a dream come true when I met him. I couldn t believe I was speaking to my idol and sharing my thoughts on bowling. I did exactly what he told me to do. He has promised that he will have another session with me in the near future.

That session materialised on this tour, ahead of the first Test in Adelaide when Warne spoke specifically about Kuldeep s splayed leading arm that was pointing in the direction of fine-leg rather than more inclined towards the batsman, resulting in him not being able to get his full body into the ball and therefore not procuring the fizz off the pitch that will make him impossible to play off the surface if you didn t pick him from the hand.

ALSO READ: Best and worst from Day 4 of the Sydney Test

That chat also helped, because when he arrived at the bowling crease at the SCG on Friday (January 5) afternoon, it was clear that work in the nets was being translated to deeds in the middle. The right arm was a lot less opened up, which allowed him to drive through his action and get pace off the track.

Two of Kuldeep s five wickets came off full tosses, but what he had done around those deliveries influenced the strokes that the batsmen played to those full balls. Despite the relative uniqueness of his craft, Kuldeep is less mystery than might be perceived. Closer inspection of his action, especially from the safety of living rooms and the luxury of innumerable replays, will help pick the wrong un from the stock delivery which spins into the right-hand batsman. But batsmen out in the middle don t have that same privilege, and therefore how they play the next ball is often influenced by how much they have been bamboozled by the previous one(s).

Spinners in general embarrass rather than terrify, but they wound egos like pacemen can never bodies. It is in their soft, gentle, enticing luring of batsmen to their doom that their USP lies; wrist-spinners do it with greater effect than finger spinners, and especially if they belong in the showman category like Warne. Kuldeep doesn t have the personality, yet, to emulate his hero on that count, but he sure does have the tricks. It s only a matter of time before his stock soars in duration cricket.

I don t believe in mystery, Kuldeep had proclaimed on Saturday evening. If you are good enough to deceive the batsman in the air, that s more important to me. The beauty of cricket is that you have to keep learning every day, and that s what I keep doing. For a spinner, it s very important to follow the basics of spin bowling give a little flight, turn the ball and land in the perfect area to deceive the batsman in the air.

Mystery can fade as rapidly as it takes root, where faith in and command over tried and trusted methods will remain a faithful ally for the longest of times. Still only 24, but with 124 international wickets already in his kitty across formats, Kuldeep has shown that he is no flash-in-the-pan, no one-trick pony. His journey towards becoming a thoroughbred is certain to be fascinating. 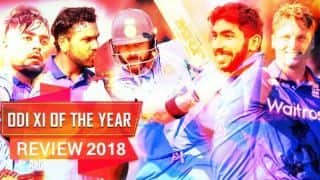 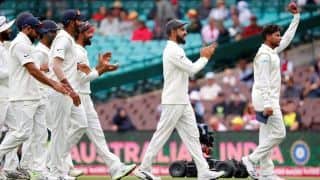