India’s pace bowlers produced a most impressive display, to offer fans as compelling an opening day as could be expected of this dead rubber fifth Test.

Bowlers may bemoan that it’s a batsman’s game, but it is undoubtedly bowlers who win Test matches. It’s a skill that – shout it from the rooftops – India are making a habit. On a fine batting track at the Kia Oval, India’s pace bowlers produced a most impressive display to offer fans as compelling an opening day as could be expected of this dead rubber fifth Test.

After Alastair Cook, in his final Test, featured in stands of 60 for the first wicket and 73 for the second, even while surviving against some superb bowling from India’s fast bowlers, Virat Kohli’s team roared back in the final session with three wickets for one run.

The dramatic turnaround came in the final session courtesy a double-wicket maiden over from India’s best bowler of the series, Jasprit Bumrah, which makes you wonder what could have happened if he had been fit for the first three Tests. By stumps, England had been reduced to 198/7 after a double-wicket over from Ishant Sharma, which meant that six wickets had fallen for 48 runs in 19.3 overs.

Look beyond the drip-drip run rate, and this was a wholesale day in what has been an engrossing Test series, never mind that the quality of cricket on view has been substandard, overall. It was far from quick: 198 came in 90 overs, easily the slowest day of the series. But it had sub-plots to enliven the fact that this was a stalemate, given England have won the series. India, as Ravi Shastri boomed before this match, are not going to throw in the towel and are determined to make it 2-3 before returning home.

By that token, it was a good day for them, barring two dropped catches. This was not a surface on which batting was difficult, which makes India’s situation all the more credible. Their fast bowlers were magnificent, asking questions of each English batsman. As Bumrah, Ishant and Mohammed Shami kept a tight line, England’s batsmen remained largely on the defensive.

India’s trio of pace bowlers were very good during the afternoon session, keeping a lid on the scoring and hitting the right areas to keep Moeen Ali in a twist and Cook subdued. It was credit to his warehouse of tenacity that Cook was standing at tea, on 66. Throughout the afternoon the fast bowlers moved the ball about, beating the bat and finding the edge, and this kept Cook and Moeen uneasy.

There was to be no fairytale hundred for Cook – well, not yet. On 71, he was forced to play at a delivery from Bumrah, bowling from around the stumps. Standing tall, he pushed at the ball defensively and looked on in agony as it rolled onto the stumps.

Cook’s dismissal was an anodyne for India, after 63.2 overs of watching the former England captain nudge, dab and steer his way towards what appeared like a century for the taking … or, more aptly, grafting. Then, two wickets came as like a Perseid shower. Joe Root lasted three balls, playing all over a full and straight ball from Bumrah. An outswinger from Ishant did for Jonny Bairstow, giving him his third duck in four innings. England had slumped to 134/4 in a flash.

England strove to show they had learned from their batting mistakes this summer, yet once more they let go a position of strength. The batting was given a platform, with Cook and Keaton Jennings putting on England’s best opening stand of the series, and Cook then registering the first fifty by an England opener all series. Neither partnership was untying to send the fans into raptures, but given the weaknesses of this team, a position of 133/1 was huge.

Then came Bumrah’s double-strike, which coupled by Ishant’s removal of Moeen and Sam Curran smashed any hopes of England getting a big total.

From an aesthetic perspective, India’s fast bowling was supreme, barring a few too many balls that moved too far past the diving wicketkeeper Rishabh Pant. It was a day of parts within parts. Moeen’s first 23 runs took 102 balls, with the new England No 3 rarely looking convincing over three consecutive deliveries. He pushed, edged, nudged, shovelled and was was beaten more times than the customary blonde babe shrieks in a typical Hollywood slasher flick. On two he was dropped, a thick outside edge put down by Virat Kohli at second slip, one-handed.

His fifty came up off his 167th ball faced, to much cheer from the England crowd. It was, frankly, as wretched a Test fifty as you could be forced to watch. Never convincing, Moeen gnawed away at India’s psyche until Ishant ended his obdurate innings on 50, the fifth longest innings of Moeen’s Test career. And then, just as Bumrah had done, Ishant made it large by getting Sam Curran caught behind for 0 second ball.

Soon after, Ishant banged one in and had Jos Buttler hopping back. Kumar Dharmasena gave it out, Buttler reviewed and was given a reprieve.

If there is a blot on India’s day, it is that two catches went down in the span of four balls. In the 31st over, Cook was squared by Ishant and nicked low to fifth slip, where Ajinkya Rahane grassed a low but fairly straightforward chance. In the 32nd over, Moeen threw his bat at Bumrah and edged towards Kohli’s left at second slip, where a sharp one-handed catch went down.

India will have to bat England out of the game from here, and thus the next four days will show how many lessons have actually been learnt. Buttler survived to fight another day, but India, with a new ball at their disposal on Saturday morning, will be the happier team. 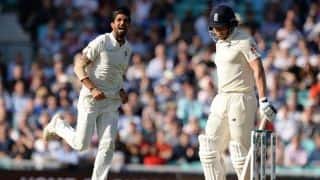