England continued to remain ahead of India as they piled up 477 in the first innings, with Moeen Ali scoring 146 and Liam Dawson and Adil Rashid scoring their respective half-centuries in the Chennai Test.

England continued to remain ahead of India as they piled up 477 in the first innings, with Moeen Ali scoring 146 and Liam Dawson and Adil Rashid scoring their respective half-centuries in the Chennai Test. In their reply, India made a sturdy start, reaching 60 for no loss at the end of the second day. India trail by another 417 runs, but on a benign wicket at the MA Chidambaram Stadium, the hosts will aim to exploit England s inability to spark batting collapses in their ranks that has been the trend so far. Let us take a look at the highlights of the second day s play in the fifth and final Test at Chennai:

India s strong start: The Indian cricket team had an ordinary first day in the Chennai Test, and needed to pull off something special on the second to force their way back into the contest. India could not have asked for any better start than what they got via Ravichandran Ashwin. The local hero, who remained surprisingly wicketless throughout the first day, struck in the very first over when he removed Ben Stokes, caught behind to the wicketkeeper for 6. Stokes wicket was the 28th in the series so far for Ashwin, and it was his 131 st dismissal of a left-hander in the career. Ishant Sharma provided something more to cheer about, as he removed the fidgety Jos Buttler for a 17-ball 5, trapping the right-hander in front of the wickets.

Moeen Ali falls to old enemy: The England No. 4 deserves a lot of applause for holding the innings together, chalking out a much-disciplined knock and taking England to a position of command. The highlight of Moeen s innings was the fact that he was able to curb the instinct to play aggressively, and instead, waited for bad balls to be punished. All looked fine for the left-hander who was set to register his highest Test score, but Umesh Yadav spoiled his party.

Umesh started bowling short to Moeen when the second new ball was about 15 overs old with a packed leg side field. The England batsman was brave to take a few blows on the body, which told India that Moeen wasn t assured of his game plan against the short ball. One of the short deliveries hit Moeen on the chest, and one went on to hit his biceps. This was too much for Moeen to handle, who finally went for a pull shot, in the air, straight to Ravindra Jadeja at deep midwicket. Moeen walked back at 146, short of 9 runs for his highest Test score. An old enemy had indeed returned to haunt Moeen.

England s crawl: Resuming at 284 for 4, England were reduced to 321 for 7 when Moeen was dismissed. Indian bowlers licked their lips on the opportunity of bundling England under 350, but Liam Dawson and Adil Rashid spoiled their plans. England produced a strong fightback since these two got together, sucking the life out of the match. The run-rate dropped below 3 an over, flirted with 2.5 and even less than at times. But England crawled towards 400-run mark, slowly and steadily.

Liam Dawson announces arrival: The Hampshire all-rounder was pulled out of the Bangladesh Premier League (BPL) 2016 to play Tests in India. He did not get a chance in the fourth Test at Mumbai, but Dawson announced his arrival at Test arena with a fluent 66 not out. The right-handed batsman showed all positive signs in his innings, during which he added 108 runs for the eighth wicket with Adil Rashid. Dawson faced 148 balls, struck 5 boundaries and 1 six off Ashwin to make an impressive start to his Test journey.

Adil Rashid shows mettle: For someone who has 10 First-Class hundreds, Rashid did justice to his talent by scoring his second fifty in the Test career. But on Saturday, Rashid put a heavy price on his wicket and stroked his way to a fine 155-ball 60. Rashid hit 8 boundaries in the process and did not for once appear to be the bunny that he was turned into by several Indian bowlers. Rashid, like Dawson, played a lot of strokes along the ground and took his time to score runs, which was the highlight of his innings.

A long list of injuries: The start of the Indian innings saw Parthiv Patel open with KL Rahul since Murali Vijay suffered an external injury to his left shoulder. At one point of time in the day, Ravindra Jadeja was away with a niggle which saw Akshar Patel coming on to field as a substitute. During his innings, Rahul was hobbling with his right leg not allowing him to even play his strokes with ease. Certainly, this five-Test series in a long home season is proving too much for the Indian cricketers.

India s steady reply: The Indians began slowly, and reached the end of play having knocked off 60 runs from the English total, without losing a wicket. Rahul struggled with his right leg for a brief period of time but Parthiv batted with ease to reach 29 not out. Rahul was 30 not out at stumps, which is his best performance in the series so far playing his third Test. 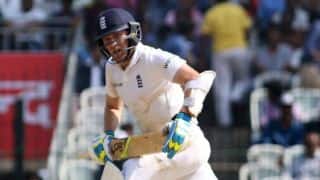 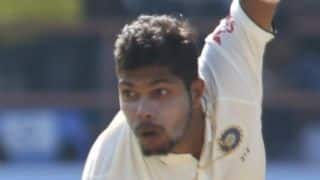