In a career that has spanned close to three years now, Jimmy Neesham has played a mere 9 Tests.

At one point of time, just before he got out in his third Test innings, Jimmy Neesham averaged 247, bringing quizmasters across the world jump in temporary excitement and typing their way to glory in frenzy only they can relate to. Neesham s average hovers around the 40-mark these days, which makes him human. It is not a bad number, given that his strike rate is an excellent 67. Neesham is a decent medium-pace bowler. He is also a quality fielder, but that should not count, for New Zealand cricketers have been brilliant fielders since the beginning of time. Neesham also one of the most-loved cricketers on Twitter, but that has nothing to do with this piece.

In a career that has spanned close to three years now, Neesham has played a mere 9 Tests. This is the tenth. This is also his second Test since Wellington 2014-15. That does not sound right for a man of Neesham s calibre, who should have had double that many caps by now, but injuries kept him out on a consistent basis. New Zealand s decision to drop Neesham from the World Cup 2015 squad seemed counterintuitive, but he had taken it in his stride, at least in social media. His fans grudgingly agreed that Grant Elliott was an excellent replacement.

Neesham seemed set to play in the India series before being ruled out at Kanpur and Kolkata. Given how New Zealand has collapsed in the series, Neesham s presence would almost have added balance to the side, especially at Eden Gardens, a pitch that might have reminded him of home conditions. Instead, he sat in the pavilion, watching Trent Boult and Bhuvneshwar Kumar and Mohammed Shami do wonders with the ball in helpful conditions. It must have hurt, for Neesham is at his best when the ball moves around a bit. His last 2 home Tests had fetched him 6 wickets for 99: he could have pulled off an encore.

Instead, he had to wait till Indore, watching New Zealand lose 2 Tests. There were moments in both Tests where New Zealand seemed the better side: another half an hour of pressure, and one of them could have tilted their way. Neesham could have done that with quick thirties or two-wicket jolts. But he was not there.

Instead, he sat out helplessly, injured, watching New Zealand succumb twice to pressure against a side against whom he had scored a hundred to salvage a lost cause on Test debut.

The chance came at Indore. The series had already been clinched. New Zealand were, to steal a clich from commentators and journalists, playing for pride . Kane Williamson came back. And Neesham got in at the cost of Neil Wagner.

On came Shami. Neesham responded with four through point. It was a poor delivery, but it still had to be put away. And Neesham makes them look prettier than what they are supposed to, even easy pickings off rank half-volleys. The stroke also prompted a fielding change, for Kohli realised that the gap was too big.

Some balls came at normal height. Some of them kept low. Shami s line was impeccable, which was dangerous, given the variable bounce, but Neesham was up to the challenge.

Then came an astonishing shot. Shami bowled one on leg-and-middle. Neesham stood still almost till a point when it seemed he had forgotten to move. Then he suddenly sprang into action, and the ball was tucked to mid-wicket for three.

There were uncomfortable moments. One ball from Shami kept low and came in. The ball took the inside edge. In the same over Shami reversed one past the outside edge. Handling Ravichandran Ashwin was difficult enough without the man at the other end spewing fire. It did not seem he would last.

But a tired Shami gave way to Umesh Yadav, who was cut ferociously for four. The last over of that over took Neesham s edge and raced to the third-man fence: neither wicketkeeper nor third (and only) slip reacted.

Watling perished after the fifty-run stand. Ashwin replaced Umesh. When Ashwin had tossed one up in his previous spell, Neesham had simply stretched his front foot, taken it on the full, and bunted it over mid-wicket. This time, too, Neesham took him on, Neesham-style: he lofted one over Ashwin s head, then swept one softly yet deftly to earn two boundaries in three balls.

Jadeja was lofted over his head for four. Neesham swept hard and flat to collect two more boundaries, the second one the result of a mis-field. He went after Jadeja again, but a diving Cheteshwar Pujara could not cling on to it at long-on.

And just when it seemed he would become the first New Zealand batsman to score a hundred in the series, Kumar Dharmasena upheld a leg-before appeal, sending Neesham back. It had hit him outside off and was spinning away. It was not a correct decision, but there was little he could do about it.

He sort of grimaced when he saw the replay on television on his return to the pavilion. Not only was it a wrong decision, it was also a decision that cost him his third Test hundred (first since his third Test innings). A correct decision might have extended the New Zealand innings till Tuesday morning, or maybe further. It might not have made a difference, but it might have as well.

Jimmy Neesham was not a happy man when he was sent back. But when he will sit down and think of his comeback innings, he will probably not feel as bad, for he had helped New Zealand double the total, had instilled some hope of a draw in them, and most importantly, had helped restore balance in the side, at least to some extent.

There will be more of these if he remains fit. While he is awesome on Twitter, he is no less attractive in whites, and can certainly serve New Zealand cricket better on the ground than off it. 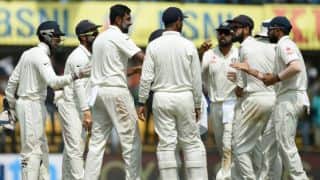