Here are some of the highlights of the first innings of match 13 of ICC World T20 2016 between India and New Zealand.

India and New Zealand clashed in Match 13 of ICC T20 World Cup 2016, the first match of the Super-10 stage. New Zealand won the toss and elected to field first, following which they limped to a mere 126 for 7. It was an innings of stark contrasts, with the first over yielding 13 and the next 19 overs producing a mere 113. Jasprit Bumrah and Suresh Raina were the pick of India’s bowlers, with a combined spell of 2 for 31 in 8 overs. Here are some of the highlights of the first innings of the match. Full Cricket Scorecard: India vs New Zealand, ICC World T20 2016, Match 13 at Nagpur

New Zealand’s spin gambit: Kane Williamson surprised everyone at the toss by announcing that New Zealand had dropped Trent Boult, Tim Southee, and Mitchell McClenaghan from the side, opting to go in with three spinners instead in the form of Ish Sodhi, Nathan McCullum, and Mitchell Santner. This meant that Adam Milne, Corey Anderson, and Grant Elliott were the only pacers in the side. Full Cricket Updates: India vs New Zealand, ICC World T20 2016, Match 13 at Nagpur

Six and Out, Part 1: Martin Guptill got the match off to a riveting start by hitting the first ball — bowled by Ravichandran Ashwin — straight back over his head for six. However, Ashwin had his revenge off the very next ball, trapping Guptill LBW. Replays suggested the ball would have bounced over the stumps. New Zealand were 6 for 1 in 0.2 overs. READ: India team in ICC T20 World Cup 2016, Preview: Hosts look for 2007 encore

Six and Out, Part 2: Colin Munro came in to bat at No. 3 and reverse-swept Ashwin for six off the second ball he faced. He tried to tried to slog Ashish Nehra in the next over, but could only manage to give a catch to Hardik Pandya. New Zealand had lost two of their biggest hitters in the first two overs of the match. READ: India show ICC World T20 2016 preparations are in order despite loss to South Africa in warm-up tie

New Zealand crawl: After the first two wickets fell as a result of over-aggression, the rest of the batsmen over-compensated by slowing to a crawl. Williamson made 8 from 16 balls, Corey Anderson made 34 off 42, Ross Taylor made 10 off 14, and Grant Elliott scored 9 from 12. Only Mitchell Santner (18 off 17) and Luke Ronchi (21 not out off 11 balls) managed to maintain strike rates of over 100. READ: MS Dhoni, Yuvraj Singh, Ashish Nehra prove that age is just a number

Suresh Raina lights up Nagpur: After Ashwin and Ashish Nehra opened bowling Bumrah came on to bowl. The fourth bowler MS Dhoni used was Suresh Raina. The part-time off-spinner took 1 for 16 in his 4 overs, including the all-important scalp of Williamson, stumped. A few overs after that he fielded one off his own bowling and back-handed it onto the stumps to catch Taylor short of his crease.

Bumrah strangles the Black Caps: Bumrah continued his admirable run in international cricket. He conceded only 1 run off his first over and later bowled a wonderful over to Santner, Anderson, and Elliott which comprised of five dead-straight yorkers. Anderson’s vigil was ended by one of those balls. Bumrah finished with figures of 1 for 15 in his 4 overs. 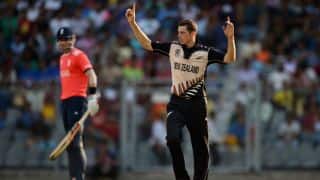