India vs Pakistan, ICC Cricket World Cup 2015: Our celebrations and your “kab phorengey”

India vs Pakistan, ICC Cricket World Cup 2015: Our celebrations and your “kab phorengey”

India beat Pakistan by 76 runs in their ICC World Cup 2015 match at Adelaide.

India celebrated last night after trouncing Pakistan at Adelaide Oval in ICC Cricket World Cup 2015. The ecstasy has not worn out the morning after. Tanmay Mukherjee re-lives the victory, the joy of supporting India, the Javed Miandad phobia, and an arm around the shoulder of Pakistan supporters who still crave to make use of the fire-crackers.

I first realised cricket is a wonderful game as an eight-year old when India snatched victory from the jaws of one mighty and scary Javed Miandad. It was not that the match was exceptionally close, but as a kid I was conditioned to believe that the first rule of following Indian cricket is to be mortally scared of Miandad. With that Indian victory at in the World Cup match at Sydney, I realised that there exists a fantastic (and mildly fanatic) “We” —the supporters of Indian Cricket Team.

By 1996, when Venkatesh Prasad XI trounced Aamir Sohail XI, I was already old and stubborn enough to hold intense opinions about the game and its elements. Growing in a Bengali household meant most of those “intense opinions” would be Anandabazaar Patrika-based; and getting the better of Pakistan every time in the World Cups is the highest form of dope that I have ever known. Sachin Tendulkar’s stunning 2003 innings and the victory in semi-final win in 2011 filled me up with enough adrenaline to fight a hundred Decembers without monkey cap (I have to gently remind you here that I am a Bengali).

Over the years and over five previous India vs Pakistan cricket World Cup encounters (plus the ones in ICC World T20) I have been conditioned to believe that even the World Cup title post a defeat to Pakistan is not worth it. I am glad, that “our” guys have maintained a clean sheet across 23 years.

Let me emphasise on the fact: 6-0 is huge; immense; and extremely satisfying. We are like a billion Douglas Jardines who have managed to beat a Don Bradman in every important encounter.  The feeling is that momentous. That sublime.

This year, as a build up to the India vs Pakistan World Cup clash, Star Sports launched this TV commercial in India that fascinated all of us.

I cannot imagine something more gratifying than the incredulous look on the face of that hapless Karachi fellow whose fire-crackers remained untouched since 1992 as Pakistan continued with their winless World Cup streak against India.

One may, of course, be keen on learning why he did not burst all crackers when Pakistan lifted the World Cup in 1992, but then, that would be mindless nitpicking. The commercial managed to woo the Indian cricket watching audience beautifully and I loved it.  The guy in the commercial soon earned a fancy nickname on the social networking cycles: “The Kab Phorengey Fellow”.

To our delight, our record against Pakistan in World Cup cricket continues to remain intact even after the encounter at Adelaide in ICC Cricket World Cup 2015. As usual, I contributed generously to India’s victory by fighting different formats of jinxes through a series of well thought out acts and precautions such as:

–    Placing the television remote control at a specific angle on the centre table that suits the batting flow of Virat Kohli.

–    Not altering my cross-legged position to help Shikhar Dhawan on his way to a precious fifty.

–    Keeping the laptop browser open with live online score updates despite the fact that the match was live on my television. Since empirical evidence suggests that this act would ensure that Indians wouldn’t lose wickets in a flurry.

–    The sofa cushion that was on my lap when Rohit Sharma got out was kept out of my sight for the rest of the Indian innings. I got the cushion back on my lap when Pakistan walked out to bat and Younis Khan obliged almost immediately.

–    Steering clear of any kind of comment that glimmered with unnecessary optimism. As is common knowledge, nothing jinxes cricket matches more than Optimism. I kept telling myself this Kohli innings would not last or Ahmed Shehzad would run away with the match or a match-winning hundred from Misbah-ul-Haq is overdue; and everything fell nicely into place.

To cut the long story short, I have personally contributed to each of these Indian victories along with many other Indian fans.

Mind you, it has been very, very hard work — but the hard work was duly rewarded when Shahid Afridi Boom-Doomed himself off the crease.

It was only a formality after that, and evidently this “kab phorengey” fellow’s agonising wait will have to continue. Now that we have a mental representation of the face of a dejected Pakistani cricket fan, the victory actually appears sweeter. To cement the feeling of sweetness, we have gone about the task of sharing some engagingly happy memes across the social media circle such as these:

To summarise, I am ecstatic as an Indian Cricket fan. Amidst all the despondency of a horrible tour Down Under and gloomy apprehensions clouding this World Cup from MS Dhoni & Co.’s point of view, this is just what Ravi Shastri’s doctor had ordered for us. Well done, Team India.

I just wish to communicate few personal thoughts to this “kab phorengey” guy. Of course I know he is not real. But what I do know is that there are many such dejected faces in Pakistan — many who have hoped against hope that this time everything will change — but things have refused to alter in past two decades.

I know you guys exist, and exist in millions — and here are a few sentiments I want to share with millions of “kab phorengey”s from the other side of the border:

I know how you feel.  Trust me, I do. I have been supporting Arsenal with all I have for a while now and I am too tired to list what they have not achieved over what seems like a million years.

East Bengal, the football club whom I love more than Rahul Dravid or Govinda or biryani, or even all three combined, have not won the National League title since I graduated. I understand how agonising it could be for a fan to witness repeated thrashing of Roger Federer at the hands of “kal ka chhokra” Rafael Nadal: it is tough, heart-wrenching, and capable of evoking near-death feeling at times — but the fan inside us lives on for another day and that’s the finest bit of romance in life.

You hold on to your unused patakhas man! Tell that kid of yours, who is utterly soaked in your haplessness, “Phorney ka mauka aayega” (of course, we believe that Team India won’t give you any opportunity and your bunch of patakhas will find a safe corner in a Cricket Museum of Sadness a hundred years from now).

But just do not give up on the poetry of believing in your team, come what may. We have all been there. We all know how it is. From an Indian fan immersed in the frenzy of celebrations to a Pakistani fan ruminating in the gloomy corner of his study, here goes a hug. Hold on to it and take care.

(Tanmay Mukherjee is a Bengali blogger who loves the internet, food, cricket and Kolkata, and is keen on compiling trifles). 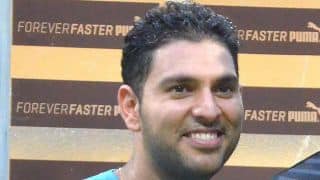