Shaw pummelled a threadbare West Indies bowling attack in a partnership of 206 with Cheteshwar Pujara who made 86.

Prithvi Shaw, the youngest specialist Indian batsman to be handed a Test debut since Sachin Tendulkar in 1989, looked utterly at ease in his first innings at international level as he carried India to within three minutes of the tea break on day one of the first Test versus West Indies with a well-compiled 134 off 154 balls. At 233/3, India were firmly in command.

When he punched a full ball from Keemo Paul into the covers and scampered back for two during the afternoon session at Rajkot, Shaw became the youngest debut Test centurion for India – at 18 years and 329 days. As tea approached, Shaw hit his first six in Test cricket but fell moments later to a straightforward caught-and-bowled to Devendra Bishoo. This cut off a confidence-coated innings of immense maturity and application, in which Shaw pummelled a threadbare West Indies bowling attack in a partnership of 206 with Cheteshwar Pujara who was cut off on 86.

It was also a firm reminder of why Shaw has long been singled out for a career at this level. On a very good batting surface at the Saurashtra Cricket Association Stadium, the debutant opener batted with the assurance of a seasoned pro to turn a scoreline of 3/1 following the loss of KL Rahul for a duck in the opening over into a dominant one, while producing numerous shots that dripped with the memories of Tendulkar.

Shaw looked on as Rahul was given lbw for 0 in the first over from Shannon Gabriel, but did not appear rattled at the slightest. His first runs in Test cricket came with a delicate push into the covers for three, his first boundary a cracking slap past point of Keemo Paul. In Paul’s second over, Shaw unfurled three boundaries: a stunning flick off the pads, a glance to fine leg and a slash over the slips. Each shot had the Tendulkar stamp, and in no time Shaw was 22 off 16 balls.

His fifty came up off his 56th ball faced, a straight drive off Roston Chase being received by loving cheer from the few spectators gathered at the venue – most of them school children. In Chase’s next over, Shaw put away a half-tracker and a floated up delivery to the extra cover boundary in succession, and with growing disdain.

Shaw cracked two fours off Devendra Bishoo in the over after lunch to move to 84, moved into the nineties by smacking a Bishoo long hop, cracked Gabriel wide of point to get to 98 and then drove Paul for two to get to a cherished hundred off 99 balls. His celebration was one of relief, and one got the sense that plenty more was ahead.

That he had a batsman of Pujara’s experience at the other and was no doubt a big help. India’s No 3 was also the beneficiary of some inconsistent bowling at a venue where he has racked up over 1000 first-class runs at an average of over 68, including a career-best 302 not out. The debutant Sherman Lewis was punched past the stumps twice with sumptuous timing and then cracked off the back foot, before Bishoo strayed onto the pads and was paddled for four more. From 2 off 21 balls, Pujara suddenly had 21 off 28. He followed Shaw to his own fifty off 67 balls, and looked on course for a century of his own before, on 86, Pujara poked at Lewis and nicked behind. 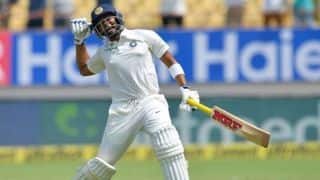