India ended up beating West Indies by four wickets, although there were several mistakes committed by them.

1. Laxness while fielding: India were outstanding on the field in each of the first three games, with Suresh Raina‘s miss at slip in the third match against UAE being India’s only dropped catch in the tournament before this game. However, the number of catches dropped by India shot up against West Indies, with Chris Gayle benefitting twice (by Umesh Yadav and Mohammed Shami, off each other) — albeit off tough chances — while top-quality fielders like Ravindra Jadeja and Rohit Sharma dropped dollies. India need to guard against dropping catches, and maintain their good record of taking chances. Top 10 bowlers in ICC Cricket World Cup 2015

2. Easing up on intensity: India had West Indies on the mat at 85 for seven in the 25th over with only Darren Sammy and Jason Holder being the recognised batters. Then the old demon resurfaced, as India were unable to close out the innings and allowed Sammy and Holder to put on 39. Even after Sammy’s dismissal, Holder and Jerome Taylor were able to add a crucial 51 for the ninth wicket. Had the West Indies had a better bowling attack, those 90 runs could have proven to be the difference between victory and defeat. Top 10 fielders in ICC Cricket World Cup 2015

3. Getting carried away with the bat: Rohit had played a delightful cover drive off Jason Holder in the sixth over of India’s innings. It was a ball just on off stump, and he threw his bat at it savagely as the ball raced away to the cover boundary. The very next over, Jerome Taylor bowled a ball in a similar region; but it was quicker and moved just enough to take the outside edge of Rohit’s attempted encore.  Top 10 wicketkeepers in ICC Cricket World Cup 2015

Virat Kohli was batting well despite flashing outside off stump a few times. He was punishing anything on his pads, and the West Indian bowlers were gifting him leg-stump half-volleys on a regular basis. Kohli looked set for a big score, but perished while attempting an ill-fated pull shot off Andre Russell. It was similar to the way he got out at the crucial juncture in India’s first Test against Australia at Adelaide. His dismissal then had resulted in an Indian loss from a winning position. This time, he was lucky that MS Dhoni was there to pick up the pieces. ICC Cricket World Cup 2015: Pool-wise Team Standings

The Indian batsmen got their eyes in and then found ways of getting themselves out going for their shots. Of the six batsmen who got to double figures only MS Dhoni went past 40, while Kohli was the only other one to cross 30. India need to guard against getting carried away while batting and buckle down a bit. ICC Cricket World Cup 2015: POINTS TABLE

4. Losing early wickets: In each of India’s first three wins, an early wicket was lost, but the other opener and Kohli, batting at No. 3, put on runs to give India a strong platform. Against West Indies India were reduced to 20 for two before Kohli and Ajinkya Rahane added 43. They kept losing wickets regularly after that to keep the West Indians in the hunt. Had two of the top three put on a good stand to begin with, the match would probably have ended 10 overs earlier with far fewer wickets lost. ICC Cricket World Cup 2015: SCHEDULE & MATCH DETAILS

5. Not playing according to the situation: With India at a precarious 107 for four, Suresh Raina chased a wide ball and edged — of all people — Dwayne Smith to the ‘keeper. Then, at 134 for five, Jadeja went for a pull shot and offered Marlon Samuels a catch at square leg. On both occasions India were going along nicely and the batsmen did not need to go for glory, but instead should have buckled down and seen India through. India’s tail has a propensity to self-destruct, and had either one of Ravichandran Ashwin or Dhoni got out things could have ended differently. ICC Cricket World Cup 2015: Complete Coverage 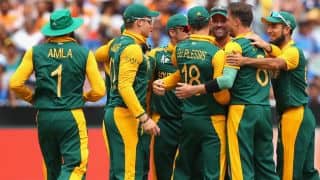