In a chat with CricketCountry, Sandeep outlined the importance of Warner's leadership.

Last year’s Indian T20 League runners-up Sunrisers Hyderabad have been boosted this season by the return of David Warner, who is back after serving out his one-year suspension received in the aftermath of the ball-tampering scandal.

And Sandeep Sharma, the fast bowler who joined Hyderabad from Punjab ahead of the 2018 season, believes that Warner’s comeback will be vital to the franchise’s success this season.

“When he returned this year, it never looked like he was apart from the team, [so] his return will make a huge difference to Hyderabad s chances,” he told CricketCountry in a chat. (READ: David Warner reveals he was nervous on IPL return)

For Sandeep, Warner acts a mentor for him and the other young Indian players in the Hyderabad squad.

“He s quite an easy-going guy and speaks to me on many aspects such as training and nutrition. I have never played with him and like me, there are others in the side,” he said. He also sits with us and keeps telling us that all the teams who have won in the IPL, their young Indian players have done well. He guides us youngsters on how to go about our preparations. It s always good to get such inputs from a player like David Warner. (READ: Warner overtakes Gambhir’s 50 record)

In his first match back for Hyderabad, Warner hit 85 off 53 balls to help get the total to 181/3 on Sunday. But that total proved insufficient as Kolkata, spurred on by Andre Russell‘s unbeaten 49 off 19 balls, won by six wickets. (WATCH: Nitish Rana, Andre Russell power Kolkata to thrilling win)

They needed 53 runs off three overs, which had never been achieved in the IPL before, and Russell hit four sixes and four fours to avenge last season’s defeat to Hyderabad in the second Qualifier.

We played better than Kolkata, but those last three overs made the difference. It was disappointing to lose the first game,” said Sandeep. “As a bowling unit, we should have defended that target. It was the season s first game, so we will sit and talk about our execution and then try to reflect on that.

Everyone knows what Russell is capable of. He is one of hardest hitters in the game. We tried to execute our skills but fell short. Credit to Andre Russell. There s been no dent to our confidence, this is not the first time when he s hit bowlers out of the park, but it s important how we bounce back.”

For Sandeep, Hyderabad’s squad has enough match-winners to deliver another run towards the league title.

“We have many X-factors in our team, players like Kane Williamson, Warner, Bhuvneshwar Kumar, Rashid Khan, who on a given day can win matches for the side purely due to their performances. Our team spirit and the bond that we share has been the best I’ve seen,” he said.

Hyderabad host Rajasthan at home in their next match on March 29. 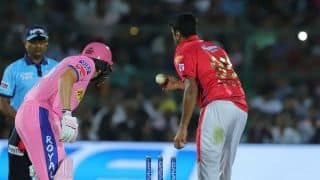