An ensemble of 11 all-time cricketing greats who either batted or bowled left-handed.

On the occasion of International Left Hander’s Day, we at CricketCountry have picked an all-time Test XI of left-arm cricketers.

Do you have a better XI?

Send us your selections at cricketcountry@corp.india.com. Happy reading.

Hayden’s second coming as a Test opener came in the epic series in India in 2001, when he swept all before him and never really looked back until he retired with 8625 runs. Hayden had a huge role to play in changing the way Test openers went about their game, and his association with fellow southpaw Justin Langer helped Australia become an all-conquering side in the 2000s – twice. His large frame made his presence at the crease a dominating one, and Hayden regularly bossed opposing attacks. A true Aussie champion.

Indians will not forget his for 340 in a record partnership of 576 in 1997. The English will remember him for a superb double-century at The Oval in 1998. Sri Lankans will forever cherish him for helping put the country on cricket’s map. With nearly 7000 runs in Tests, Jayasuriya is a true star. His worth as an attacking opener speaks for itself, and his ability to wade into bowling attacks made for an exciting package.

What to say about Lara? Grace, power, precision, style, attitude, talent – he had it in abundance. He could flay attacks at will, across countries, while looking bloody cool at it. His flair was unmatched, and the image of him pulling while airborne has left an indelible mark on Test cricket’s fabric. Lara is the most successful West Indian batsman of all time with 11953 at 52.88. Set the highest score of 375, then took it back from Hayden with 400* against England.

Elegance personified, Gower was England’s twinkle-toed, blue-eyed boy wonder. That mop of curly hair and cherubic face added to the allure of one of Test cricket’s most artistic batsmen. His cover drive was to die for, and Gower used it sumptuously on his way to 8231 Test runs at an average of 44.25.

Cool Cat, they called him. Tall, moustachioed, hulking but almost dopey-looking, Lloyd could hit the cricket ball with ferocity. An astute cricket mind made him a sharp leader and he led West Indies to the top of world cricket for two decades. Lloyd played 110 Tests, 74 as captain, from which he made 7515 runs at 46.67.

The greatest allrounder to play Test cricket. A genius, capable of bowling left-arm fast-medium, slow left-arm orthodox and slow left-arm chinaman stuff. At 21, Sobers broke the record for the highest Test score – 365 – and was an exceptional fielder wherever he stood. He was also the first player to hit six consecutive sixes in an over of first-class cricket. With 8032 Test runs at an average of 57.78, and 235 wickets at 34.03, Sobers is – and will always be – an all-time legend. There were none like him.

Was there a more destructive wicketkeeper-batsman? Gilchrist could belt the ball and was capable of changing Test matches in a session. This southpaw’s game consisted of essentially three shots – the cut, pull and push past mid-off – but he used it to devastating effect, amassing 5570 runs in 96 Tests an an average of 47.60 and strike-rate of 81.95. And he was very, very good behind the wickets, as 416 Test dismissals show (the second highest in history).

Until Wasim Akram came along, Davidson was concerned the best left-arm pacer around. From a short run up, this supremely gifted allrounder could bowl quick and swing the ball into right-handed batsmen viciously, in the process accumulating 186 wickets in 44 Tests. Davidson could bat too, scoring nine first-class centuries.

Without a doubt, the greatest left-arm fast bowler in the history of the sport. Pace, swing and aggression were his assets and coupled with a thinking brain, Akram collected 414 wickets in 104 Tests, leaving countless batsmen flattened and battered. That swing, oh that swing.

The fourth most successful left-arm fast bowler in Tests, and one of five India cricketers to take more than 300 wickets in the format. Zaheer was India’s pace spearhead for nearly a decade, and a crafty exponent of swing and reverse swing. Injuries took a toll in his body, but his success overseas and on flatter subcontinent surfaces made him a special bowler. Just ask Graeme Smith.

Sri Lanka’s most successful bowler after Muttiah Muralitharan, Herath called it a day in November 2018. Emerging out of the shadow of Muralitharan, the left-arm spinner played 71 matches and bagged 362 wickets at an average of 26.15. He picked up nine 10-wicket hauls in this period. With records galore, Herath ended his career at the age of 40 with jaw-dropping 433 wickets in 93 Tests; 398 of those wickets came after the age of 30. 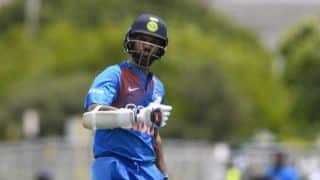