In IPL 2014, bowlers will be expected to showcase their skills.

The ICC World T20 2014 showed that the shortest format is not necessarily tilted completely towards batsmen. Come the Indian Premier League (IPL) 2014, there’s lot more matches on offer for the bowlers to showcase their skills. And those who emerge successful often play for their national team as well. Abhijit Banare takes a look at some of the bowlers to watch out for.

Among eight teams, there are numerous bowlers to pick from. So, we have segregated this section in to three types. The usual performers whom you assume are going to rock the IPL 2014, the second type is that of the underestimated bowlers, who often end up picking a lot more wickets than anyone expects them to and the third is the section whom you have hardly heard of, but can make a mark in IPL 7.

a) Dale Steyn: You have heard of Dale Steyn a lot, yet for the sake of explaining here it is. You can hit him for boundaries in one over and feel victorious; the next over he comes back to knock down your stumps and pump his fists right in front of you. Moral of the story: Never ever write off Steyn at any stage of the match. And if it’s a green track, then god save the batsmen.

b) Lasith Malinga: If Mumbai Indians (MI) have retained this bowler twice in the last six editions, it shows what value he brings to the team year after year. The World T20 showed he is in good form and the bonanza for Mumbai is that he showed some leadership skills as well with a clean record and leading Sri Lanka to an elusive World title.

c) Sunil Narine: Wonder whether batsmen spend more time watching videos and analysing Sunil Narine than the time they spend facing him. Place him outside the IPL, he doesn’t make much news. But in this league, everyone’s worried about him. It’s difficult to hit him in the shortest format because the batsmen always find themselves trying to be aggressive against him than being clever. And this usually results in Narine filling up his wickets column.

d) Dwayne Bravo: Dwayne Bravo has turned out to be a consistent bowler in the limited overs and has picked up wickets. One of the bowlers Dhoni relies on to put brakes on the opposition, when they actually look to accelerate i.e. after the 10 overs.

e) Ravichandran Ashwin:  Ravichandran Ashwin has traditionally been a consistent performer in the IPL. He wouldn’t be a threat, if his form was as it was during the New Zealand tour, but since then, Ashwin has clawed his way back into form and performed well in the World T20. The carom ball has become his wicket-taking delivery and expect it to be the same even in this IPL.

f) Mitchell Johnson: With the form Mitchell Johnson is in, there’s nothing that could stop him from demoralising the batsman. One of the big players Mumbai chose not to retain or use Right to Match during IPL 2014 auctions. It is time for Johnson to rally a strong Kings XI Punjab (KXIP) setup and take them to victories.

a) Amit Mishra: Amit Mishra has been one of the top wicket-takers in IPL and yet, teams don’t think much about him. Season after season, Mishra has been the strike bowler for the team he plays and Sunrisers Hyderabad (SRH) will look up to him to fire once again. The conditions in United Arab Emirates (UAE) too are in his favour. And at home, Hyderabad is one of the venues where you don’t see big scores and the small ones are defended well. Watch out for the wrong ‘un’ from Mishra!

b) Mohit Sharma: Mohit Sharma is a specialist in opening the bowling and and usually ends up finishing his spell in the first half of the innings. His accuracy and miserly attitude often fetches him wickets. A bowler that MS Dhoni has started trusting in since the last edition of IPL and it has paid off well for him.

c) Shakib Al Hasan: The only bright spot in Bangladesh team these days apart from Mushfiqur Rahim and Anamul Haque. Shakib Al Hasan  is a clever bowler and can pick up crucial wickets. Now, he has already done well for Kolkata in the past and will be a vital all-round option for the franchise.

d) Rishi Dhawan: He grabbed the opportunities he got in the last edition of IPL with Mumbai. But it was the successful Ranji Trophy season which earned him an INR 3-crore jackpot during the auctions. Along with Johnson, Dhawan will be one of the players to watch out for during this season.

e) Pravin Tambe: One of the inspiring stories of the last edition of IPL, Pravin Tambe has grown in to a confident leg-spinner and has done well for Mumbai’s Ranji team. He surprised everyone last season, but this time around, he will be taken seriously by the opposition. Another leg-spinner who reads the batsman’s mind well.

a) Kuldeep Yadav: Kuldeep Yadav is expected to be the surprise package this season. Playing for Kolkata Knight Riders (KKR), the left-arm chinaman bowler already has enough variations to rattle the batsmen. In the format, where batsmen look to hit the big shots, Yadav is one bowler who can fool them consistently with his box of tricks. Along with Narine, this will be a deadly spin combo on a turner.

b) Krishmar Santokie: Very few predicted the day when a West Indies pacer will make a name in international cricket by bowling seam up at military medium pace. Here is Krishmar Santokie, with his slingy action who can swing the ball in most conditions and can keep a tight leash on the batsmen.

c) Vikramjeet Malik: A talented cricketer now playing for Rajasthan Royals (RR). He did well in the few opportunities last season, but very few would take him seriously this time around. A pacer that Rajasthan will expect to strike consistently at the start of the innings with his brand of swing bowling.

(Abhijit Banare is a reporter at CricketCountry. He is an avid quizzer and loves to analyse and dig out interesting facts which allows him to learn something new every day. Apart from cricket he also likes to keep a sharp eye on Indian politics, and can be followed on Twitter and blog)) 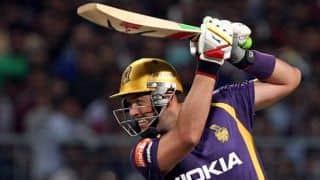