Hyderabad have lost both their opening games in IPL 2014.

Early defeats can be a rude awakening. The chinks in the armour are evident and with a long way to go, you have the chance to recover. Sunrisers Hyderabad (SRH) stumbled to two defeats in the Indian Premier League (IPL), 2014. It was their batting that disappointed, as they have recorded scores of 133 and 121 so far. It isn’t that they don’t have strength in their line-up, but the lack of balance in the ranks is what is causing the problems. As is evident, they have majority of their batting strength at the top, and once the opposition snares them, it opens the floodgates.

Hyderabad have David Warner, Aaron Finch and Shikhar Dhawan at the top. The three are power-packed and attacking batsmen. On their day, they can set the tone with some superb knocks at the top of the order. Dhawan opens the batting for India. Finch and Warner do the same for Australia. They have come up the ranks as openers and that is one may say, the best spot for them. However, that leaves the side imbalanced with Darren Sammy being the only power-hitter down the order.

In a line-up that is full of power, you cannot have all of it in one spot. It makes sense to evenly distribute it. But, Hyderabad have a problem as their front-line batsmen are top-order batsmen. Rajasthan Royals (RR) did a good thing by putting Brad Hodge down the order, to give the finishing touches. He is primarily a top-order batsman, but the wealth of his experience makes him fit for any spot. He can bring in all that experience, while finishing games. Although, Warner and Finch are experienced in the format, they may take time to move down the order.

One thing Hyderabad can do is perhaps spread the top three. Out of the trio, one could come in at No 4 with someone like KL Rahul batting at No 3. Rahul is a solid batsman who takes a bit of time in the middle. Instead of placing him down the order, he can come up, take some time and then play his strokes. Venugopal Rao is a good batsman in the middle and can be persisted with. Hyderabad did play Irfan Pathan in place of Ishant Sharma to strengthen the batting, but such a move may not pay dividends. Instead, you can bring in  Naman Ojha, who has done well in the IPL in the past.

Hyderabad do have a good bowling attack and this needs to be backed up with a good batting performance. During the last season, it was the batting which was the Achilles heel’ and although, they managed to retain most of their bowlers, they brought in new personnel at the IPL 2014 auction to strengthen the batting. In the first two games, this unit hasn’t delivered and it does need a change in approach. Compared to the last season, the batting is stronger. It is just a matter of using it to your advantage. On paper, Hyderabad are still one of the strongest in the IPL. 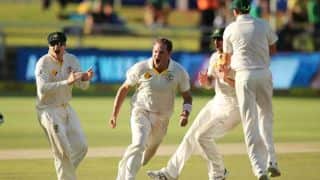