IPL 2014: Yuzvendra Chahal, Shahbaz Nadeem and other spinners who impressed in UAE

IPL 2014: Yuzvendra Chahal, Shahbaz Nadeem and other spinners who impressed in UAE

IPL 2014 has seen a plethora of young Indian tweakers razing their stakes exponentially.

The Indian Premier League (IPL) changed Lasith Malinga’s reputation as a death bowler forever. The Sri Lankan pacer’s toe-crashing yorkers and sagaciously crafted slower deliveries laid down a template in the death overs in the T20 format for the years to come. While the faster bowlers hog the final overs, the franchises bank on spin to suffocate proceedings for the batsmen in the middle overs and Sunil Narine has been a benchmark since Kolkata Knight Riders (KKR) snapped him up as an unknown product in 2012. Narine’s success opened doors for franchises to scout for bowlers in a similar ilk and IPL 2014 has seen a plethora of young Indian tweakers razing their stakes exponentially with sterling displays. Let’s take a look:

Yuzvendra Chahal: Royal Challengers Bangalore’s (RCB) Yuzvendra Chahal’s splendid displays have caught everyone’s eye and have been the pick of the bowlers for his team. Warming the benches for a couple of years, Chahal’s stylish action and nagging line further strengthens India’s conveyer belt of spinning talent. Chahal has provided crucial breakthroughs and has been one of the most economical bowlers in the tournament so far. The young Haryana leg-spinner has been a livewire on the field as well and sure to end up as one of the brightest young prospects to come out of the IPL 2014.

Akshar Patel: Like Chahal, 20 year-old Akshar was also spotted by Mumbai Indians (MI) in last year’s auctions and sat on the sidelines, soaking in the vast experience and the game’s illustrious names of Mumbai’s coaching set-up. The left-arm spinner had a good domestic season for Gujarat and despite Glenn Maxwell and the other big boys smashing their way to take Punjab to the top of the IPL pile; Akshar has quitely gone about with his work and has put a string of good performances. Akshar bowled the first ball for Punjab in IPL 2014 and barely looked unfazed by the prospect of bowling to the class of Brendon McCullum and Dwayne Smith. Since then, Akshar has gone from strength-to-strength in the IPL and averages 15.33 with a stingy economy rate of 5.75 and that would be the envy of a teammate of his who goes by the name Mitchell Johnson.

Piyush Chawla: While young turks Chahal and Akshar have stood tall in teams packed with glittering names, some of the other recognizable names have also used the slow pitches in the middle east to great effect, which bodes well for the bench strength of Indian spinners. Piyush Chawla may be out of favour in an Indian spin battery that looks spoilt for choice at international level but Piyush’s mastery in the format has been further vindicated despite bowling in tandem with the exceptional Narine. The 25-year old leggie was the pick of the bowlers in Kolkata’s previous fixture against Punjab and left batsmen in a daze, picking up the important wickets of George Bailey and David Miller.

Shahbaz Nadeem: His classic left-arm action and his audacity to toss the ball up to the batsmen have been grossly underrated. Nadeem started slowly for Delhi Daredevils but has grown in confidence in the tournament. Delhi handing the ball over to Shahbaz Nadeem in the early overs in recent games underlines their faith in Nadeem and the Bihar spinner has repaid his team’s confidence in him with steady performances.

With the IPL moving to India and with slower surfaces aplenty awaiting the slower bowlers, the aforementioned lesser known names should aim to build on their reputation that is steadily rising. With Amit Mishra proving to be a disappointment in the games so far, a slot may open up for these young guns in the near future for India with greater consistency. 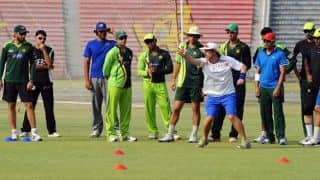