Delhi Daredevils have a talented, young squad, mixed with a few experienced and international players, but they were never able to gather any momentum at any point of time in the tournament.

Delhi Daredevils (DD) end yet another disappointing campaign in sixth position in the Indian Premier League (IPL) 2017 points table. They have a talented, young squad, mixed with a few experienced and international players, but they were never able to gather any momentum at any point of time in the tournament. They have had injury troubles, coupled with some poor performances and as a result, they did not live up to their expectations. However, DD found some bright prospects, who could someday make it big. One of them was certainly Rishabh Pant. Youngsters like Sanju Samson, Karun Nair and Shreyas Iyer too did a fine job. READ: IPL 2017: DD need to get in the right side of the result, feels Rahul Dravid

DD never looked in contention to make it to the playoffs, however, they ended their campaign with two wins out of their three matches. In the end, DD managed to win six out of their 14 games, falling short of qualification for playoffs. Lets us now take a look at performances of all the DD players and rate them on a scale of 10.

Shreyas Iyer (7/10): Shreyas missed the initial stages of the tournament due to chicken pox, but did well once he recovered. He strengthened the DD batting line-up. His 96 against GL helped DD win the game, while chasing 196. He eventually finished the season with 338 runs at 33.80, which included two fifties. READ: Winning more important than my hundred, says Shreyas Iyer after DD’s win over GL

Chris Morris (6/10): Morris had a good outing with both bat and ball. He was one of the star overseas players for DD this time around. His best knock of 52 not out came against MI, but DD fell short by 14 runs in the end. He was at his attacking best when he struck 38 off just 9 balls against RPS in DD’s second match of the season. He was DD’s second highest wicket-taker behind Pat Cummins with 12 scalps. In his nine matches, he scored 154 runs at a strike rate of 163.82.

Sanju Samson (8/10): Sanju Samson was either incredibly good or very poor in this tournament – much like DD’s campaign. His 102 against RPS was indeed a treat to watch. His 61 against GL while chasing 209 against GL too was superb. However, post that 61, Samson’s last innings scores read 0, 2, 10 and 0. He scored two fifties and a hundred to eventually finish with 386 runs at 27.57 – DD’s leading run-getter in IPL 2017.

Rishabh Pant (7/10): Pant is tipped to be the future of Indian cricket. He is expected the reins from MS Dhoni in limited-over in the near future. Pant won million hearts when he scored a fifty in DD’s opening game against RCB, just days after his father’s funeral. His 97 off 43 against GL was perhaps one of the explosive innings in this edition. He slammed as many as 24 sixes this season, He finished as DD’s second highest run-getter with 366 runs at an incredible strike rate of 165.61. He also took eight catches and inflicted three stumpings.

Sam Billings (6/10): Billings just played six games for DD. In his six games he got off to good starts in most matches, but his highest of 55 came against KXIP in a match that DD won by 51 runs. Billings finished with 138 runs at 23.

Karun Nair (5/10): Nair led DD in a few matches in Zaheer Khan’s absence. Unlike the previous edition, Nair could not live up to the expectations this year. However, he was looking in much better form during the end of the tournament, finally getting a fifty in DD’s penultimate match against RPS to guide DD to a 7-run win. READ: IPL 2017: On redemption trail, Karun Nair thanks Dravid, DD for having faith in him

Corey Anderson (5/10): Anderson played little cameos in a few games of the season, but was very expensive with the ball. His best of 41 not out off 24 came against defending champions SRH, which kept DD’s chances of making it to the playoffs marginally alive. Anderson managed to pick up just 3 wickets and conceded runs at nearly 10 an over.

Kagiso Rabada (6/10): We know Rabada is a world-class bowler, but there were instances he showed glimpses of talent with the bat as well. On his IPL debut, he finished with figures of 1 for 30 against MI, but it was his effort with the bat that almost won DD the match. He put on 91 runs with Morris for the seventh wicket after DD were reduced to 24 for 6. However, DD fell 14 runs short. Rabada also picked up 6 wickets from 6 games at 34.30 and scored 55 runs with the bat at 18.33.

Angelo Mathews (1/10):  Mathews has been in and out of the Sri Lankan side due to injuries. Injury kept him out in the initial stages of the tournament, but managed to play just three games in the end. He did not pick up a single wicket and scored just 32 from two innings at 16.

Pat Cummins (8/10): Cummins was DD’s strike bowler throughout the tournament. He finished DD’s leading wicket-taker with 15 scalps. He often troubled the batsmen with pace and was not too expensive as well, especially for someone, who bowls inside the Powerplay and at the death. Cummins also scored 77 runs at a strike rate of 145.28, batting down the order.

Mohammed Shami (4/10): Shami did not play the initial stages of the tournament, but the Indian team would be happy to see him in full fitness, just ahead of the Champions Trophy 2017. Shami leaked runs especially in the latter stages of the innings. He claimed 5 wickets from 8 matches at an economy rate of over 9.

Marlon Samuels (1/10): Samuels was named as Quinton de Kock’s replacement in the middle of the tournament. In the five games he got, Samuels did not make any significant contribution scoring just 27 runs at 7.25 at a strike rate of well less than 100.

Aditya Tare (1/10): Tare just played three games in the entire season as a makeshift opener. Out of his three innings he was out for a duck in two and managed to score 18 in the other.

Carlos Brathwaite (1/10): The West Indies T20 International (T20I) captain found it tough to break into the side in the presence of Anderson and Morris. In the two matches he played this season Brathwaite managed just 11 runs and picked up just 1 wicket.

Zaheer Khan (7/10): Zaheer led the team well once again. He completed 100 IPL matches, picked up his 100th IPL wicket and between all this also got engaged! Injuries kept him out for three games, but he proved that he is still a dependable bowler, finishing with 10 wickets at an economy rate of 7.79 and a best of 3 for 20. READ: IPL 2017: DD were always in the games they lost, says Zaheer Khan

Shahbaz Nadeem (8.5/10): It was a little hard to believe that Nadeem played just 7 matches, despite conceding runs at under 7. Amit Mishra was preferred ahead of the left-arm spinner. However in the seven games he played, Nadeem picked up six wickets. Often entrusted to bowl in the Powerplay, Nadeem did not disappoint his team.

Ankit Bawane (5/10): Following rich from in the domestic circuit, Bawane was picked in the DD squad. However he got just one game, in which he scored an unbeaten run-a-ball 12.

Jayant Yadav (6/10): Jayant played just two games in the IPL 2017 – both against SRH. He did not pick up a single wicket, but he gave away just 42 runs from his six overs. READ: IPL 2017: We needed experience in the batting order, admits Zaheer Khan

Amit Mishra (6/10): Mishra is the only DD bowler to bowl a maiden in this edition. Mishra finished with 10 wickets from his 14 matches at an economy rate of a shade under 9. He was DD’s lead spinner throughout the tournament, picked ahead of Jayant and Nadeem, when there was a need of playing just one spinner. Surprisingly, Mishra finished with the highest batting average for DD, scoring 49 runs at 49 from his six innings.

(Pramod Ananth is a reporter at Cricketcountry.com. He is a sport enthusiast and a keen observer of cricket, the contests, and its personalities. When not tracking cricket, he follows the world's soccer leagues and is somewhat partial towards Liverpool. His Twitter handle is @pramz)
First Published on May 15, 2017 8:24 PM IST
Last updated on May 15, 2017 8:24 PM IST
TOPICS:
DD Delhi Daredevils IPL IPL 10 IPL 2017
SERIES:
Indian Premier League, 2017 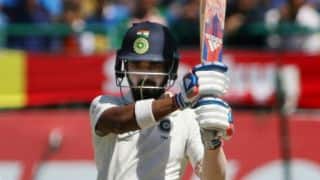 KL Rahul: Aiming for sometime in August for comeback David Warner: Australia might not have a team for Ashes 2017-18