Fresh off their respective wins, both RR and DC would want to maintain winning momentum when the two sides face each other

Ajinkya Rahane returned to form in some style, hitting a hundred, but his heroics went in vain as Rishbah Pant, Shikhar Dhawan and Prithvi Shaw powered Delhi Capitals (DC) to a six-wicket win over Rajasthan Royals (RR) in the 40th match of the Indian Premier League (IPL) 2019 at the Sawai Mansingh Stadium in Jaipur on Monday.

Chasing 192, DC were off to a flying start as Dhawan cut loose. The left-hander was severe on the pacers and the spinners and went up to score 54 off 27 balls. While he and Shreyas Iter fell in quick succession, the young duo of Shaw and Pant kept DC hopes alive with a 84-run stand before the right-hander was dismissed for 42.

Pant, who had not really enjoyed a good run of form recently, remained unbeaten and went on to score 78 off 36 balls to power DC to a six-wicket win.

20th over: Unadkat to bowl the final over! Pant hits a six to finish off the game. He is pumped and there’s elation in DC dugout. Ponting is all smiles, there are hugs and celebrations. DC have beaten RR by six wickets and have moved to the top of the table.

19th over: Archer to bowl the penultimate over! Six off the last ball and Pant has tilted this match in DC’s favour. DC have scored 11 off the 19th over, which also had a comical piece of fielding starring Binny and Stokes. DC 186/4 (Pant 72, Ingram 2)

18th over: Kulkarni into the attack! 13 runs in the over but RR though have managed to dismiss Rutherford. DC though are the favourites to win this. DC 175/4 (Pant 63)

16th over: Archer returns for his 3rd over! Fifty up for Rishabh Pant. He is playing quite some innings here! Archer, meanwhile, has conceded 9 runs in the over, with Pant hitting a six. DC 151/2 (Shaw 42, Pant 51)

15th over: Unadkat to bowl his third over! The falling-on-the-ground four is there to see as Pant hits a four and DC score 10 from the over. We are heading towards an exciting finish. DC 142/2 (Shaw 41, Pant 43)

13th over: Unadkat returns! Shaw is opening his shoulders or what! He has hit a four and six as Unadkat gives away 12 runs on return. The young Indian duo of Shaw and Pant are keeping DC alive. DC 120/2 (Shaw 38, Pant 24)

10th over: Archer returns! Three runs from Archer’s second over as DC move to 81 runs after the 10th over. They were in command a couple of overs back but then Dhawan and Iyer’s dismissals have pushed them on the backfoot. DC 81/2 (Shaw 20, Pant 3)

8th over: Shreyas Gopal back into the attack! A much-needed breakthrough for RR as Shreyas Gopal dismisses Dhawan for 54. The opening partnership is broken. DC 73/1 (Shaw 18, Iyer 1)

7th over: Riyan Parag’s turn now! This is Royal roulette in Jaipur! 6 bowlers used to bowl seven overs. Dhawan, meanwhile, has brought up his fifty as DC score 8 runs in the first over after the powerplay. DC 67/0 (Dhawan 50, Shaw 17)

5th over: Jofra Archer into the attack! 5 different bowlers have bowled the first five overs! Archer gives away four on the first ball but he has done well to give away just four on the next five deliveries. DC 45/0 (Dhawan 39, Shaw 6)

4th over: Introduction of spin as Shreyas Gopal bowls! Dhawan attacks the leg-spinner as DC score 15 off the fourth over, with the left-hander hitting 2 fours and a six. He is on the move, here. DC 37/0 (Dhawan 33, Shaw 4)

3rd over: Unadkat into the attack! 7 runs in the over as Unadkat does well after getting hit for a four on the first ball. DC 22/0 (Dhawan 18, Shaw 4)

2nd over: Dhawal Kulkarni to bowl from the other end! Shikhar Dhawan takes on Dhawal Kukarni in his first over. A six and a four as DC score 12 off the second over. DC 15/0 (Dhawan 12, Shaw 3)

1st over: Stuart Binny to start the proceedings! Good start for RR as the medium-pacer concedes just three runs in the first over. DC 3/0 (Dhawan 2, Shaw 2)

20th over: Rabada to bowl the final over! Good last over once again as DC lose two wickets and RR could only score 8 runs off the last over as Rahane could face only one ball. Are they 10 runs short from what they would have liked to achieve? RR 191/6 (Rahane 105)

19th over: Morris to bowl the penultimate over! Just 8 runs off the 19th over even as Morris concedes a four on the last ball. Good over keeping in mind the context of the game. RR 183/4 (Rahane 104, Binny 17)

17th over: Ishant to bowl his last over! Hundred for Ajinkya Rahane! What a fantastic knock this has been! Top stuff! For Ashton Turner, not so! He has completed a hat-trick of golden ducks. RR have two wickets in quick succession. A fight back from DC. RR 165/4 (Rahane 101, Binny 2)

16th over: Morris returns! The South African pacer has struck on return as Ben Stokes departs for eight. Rahane, meanwhile, has moved into 90s. A hundred beckons. RR 158/3 (Rahane 96, Turner 0)

14th over: Axar returns! The Rahane-Smith partnership is finally broken. DC must be relieved to see Smith’s back. He gets out as soon as he scored his 2nd consecutive fifty. Morris takes a fine catch at the long-off boundary rope. RR 139/2 (Rahane 83, Stokes 3)

13th over: Morris returns with the ball! Rahane can’t do any wrong tonight, it seems. Morris would have hoped for a better return but Rahane has hit him for a six and four as RR score 13 runs off the 13th over. RR 135/1 (Rahane 82, Smith 50)

12th over: Sherfane Rutherford into the attack! 16 runs from his first over. Steve Smith has taken on Rutherford, hitting him for three fours. Add to it, the three wides. Smith is nearing his second successive fifty and RR have moved past 120. RR 122/1 (Rahane 71, Smith 48)

11th over: Mishra in his third over! Smith’s turn to hit some fours now! Rishabh Pant, meanwhile, is hit on his wrists. RR have crossed the three figures, with Rahane leading the charge. Rahane-Smith have completed the 100-run stand as well. RR 106/1 (Rahane 70, Smith 35)

8th over: Chris Morris into the attack! Fifty up for Rahane as he pulls one over the mid-wicket. He has been on a roll here tonight. What a way to make a statement after being sacked as RR skipper. Smith, meanwhile, has hit a four as well. RR have scored 12 off the 8th over. RR 71/1 (Rahane 52, Smith 18)

6th over: Rabada back into the attack! Wow! Rahane is on the charge once again. That dropped catch in the last over has changed the things for the ex-RR skipper. He hits a six and a four off Rabada as RR have moved past fifty with a 14-run over. RR 52/1 (Rahane 40, Smith 12)

5th over: Axar continues! Oh dear! Will Rahane make DC pay for the dropped catch? Ishant has dropped a dolly and Rahane has followed it up with a six and a four. 13 runs off the 5th over. RR 38/1 (Rahane 27, Smith 11)

4th over: Change of ends for Ishant! 7 runs from the Indian pacer’s second over as Smith hits his first four of the night. RR’s run-rate has just moved past 6. Just. RR 25/1 (Rahane 16, Smith 9)

3rd over: Axar Patel to bowl the third over! The left-arm spinner concedes eight runs from his first over as Rahane hits his third four of the innings. RR 18/1 (Rahane 16, Smith 2)

2nd over: Rabada to share the new ball! RR have lost Sanju Samson early. Not the start the home team was looking for. Rabada does a good job to run towards the mid-wicket and then hits the stumps. RR 10/1 (Rahane 10, Smith 0)

1st over: Ishant Sharma into the attack! A four for Rahane but he was beaten on the first ball. Watchful start. RR 5/0 (Rahane 5 , Samson 0)

Shreyas Iyer: “We’re gonna bowl first. Majority of the sides have won chasing here, so we’re going by that. Our side likes chasing these days and that gives confidence for us. One change- Morris in for Lamichhane.”

Steve Smith: “Looks better than most of the surfaces we’ve seen here. I would have bowled first as well because we don’t know if dew will be a factor but well, have to bat first and bat well. We haven’t played as well as we would have liked here, or anywhere for that matter. Hopefully, we can take confidence from that and move forward. We’re unchanged.”

07.33 PM: Team news: While RR have retained the same playing XI and it means Jos Buttler does not make a return to the team, DC have made one change to the team as Chris Morris replaces Sandeep Lamichhane.

Shreyas Iyer has won the toss and Delhi Capitals have elected to bowl against Steve Smith-led Rajasthan Royals in Jaipur.

Meanwhile, there’s no shortage of support for DC even away from home.

Pitch report: “It’s a surface that offers some grass and some dryness. From one end, there is a good covering of grass and the seamers should bowl from this end. The other part of the surface is drier and could bring the spinners into play, especially with the big dimensions of the ground also aiding them. Win the toss, bowl and chase it down under lights.”

07.20 PM: RR receive a thunderous welcome at the match venue. What a way to get pumped up!

07.08 PM: The teams have arrived at the Sawai Mansingh Stadium.

07.00 PM: How Steve Smith and Shreyas Iyer have fared as captains in the IPL.

06.45 PM: Fair to say, RR have quite some plans to support their team.

06.30 PM: Will RR be able to register their fifth win against the Delhi-based franchise at the Sawai Mansingh Stadium tonight?

06.15 PM: Some of the milestones to look out for in this RR versus DC clash.

Hello and welcome to our coverage of the 40th match of the Indian Premier League (IPL) 2019 between Rajasthan Royals (RR) and Delhi Capitals (DC) at the Sawai Mansingh Stadium in Jaipur on Monday.

Fresh off their respective wins, both RR and DC would want to maintain winning momentum when the two sides face each other in Match 40 of the IPL. With a four-wicket win over Kings XI Punjab, the Capitals have taken a step closer to the Playoffs and now sit at No. 3 on the points table, tying with Mumbai Indians at 12 points.

The Royals on the other hand, continue to languish at the second-last position, despite their five-wicket win over the Mumbai Indians on Saturday. Although their hopes of staying alive in the tournament is pretty much intact, winning against the in-from Capitals will pose a bigger threat than expected. (IPL 2019 points table)

The corresponding fixture last season saw Rajasthan Royals register a 10-run win via DLS method in a rain-affected match at the Sawai Mansingh Stadium. Batting first, Rajasthan scored a total of 153/5 after 17.5 overs as rain halted play. Delhi were given a target of 71 from 6 overs but could only manage 60/4 and lost the match by 10 runs. (RR vs DC: What can we expect from today’s IPL match?)

The Kotla surface would also be on focus after attracting some criticism in the previous match. But with a win finally at home, the Capitals just seem to have that extra advantage over their opponents. The two teams have faced each other on 18 previous occasions which has seen Rajasthan register 11 victories while Delhi has managed only seven. 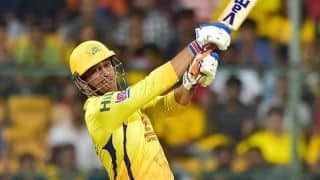