Skipper Shreyas Iyer's 58* off 49 balls and senior pro Shikhar Dhawan's 56 off 41 balls helped Delhi Capitals break the rut of losing matches at home with a canny run chase at the Feroz Shah Kotla in Match 37 of IPL 2019 against Kings XI Punjab on Saturday.

Skipper Shreyas Iyer‘s 58* off 49 balls and senior pro Shikhar Dhawan‘s 56 off 41 balls helped Delhi Capitals break the rut of losing matches at home with a canny run chase at the Feroz Shah Kotla in Match 37 of IPL 2019 against Kings XI Punjab on Saturday.

With a five-wicket win chasing down 164, Delhi consolidated their third spot in the points tally and claimed their second victory at home in five outings. KXIP did well to post an above par total, thanks to Chris Gayle‘s 37-ball 69; but their bowlers, despite having three front line spinners in the attack, failed to create any real opportunity.

After the early loss of Prithvi Shaw for 13, his sixth straight score of under 30 when Dhawan bailed out on him on a quick single, Mandeep Singh hit the bullseye from covers and Shaw had to depart.

But Dhawan was unperturbed and motored along with another innings with intent. He was off the mark with a four of Sam Curran and then added two more off two consecutive balls off Hardus Viljoen. Debutant Harpreet Brar got the taste of IPL when his first ball was hit straight over his head by Dhawan for a six as 17 runs came off it.

By the end of the powerplay overs, Delhi were at a comfortable 60/1, with asking rate at 7.42. Skipper Iyer and Dhawan played in a smart manner, rotating the strike well and found the gaps in the field to drive Delhi further. The duo’s association of 92 runs came off just 62 balls with Dhawan scoring his 35th IPL fifty.

He also become the first batsman in the league’s history to score 500 fours, but he fell to Viljoen in the 14th over, undone by a leg-cutter and went through his shot a tad early. Ravichandran Ashwin took a tumbling catch to bring KXIP back in the game and with Rishabh Pant once again falling to a reckless shot – a wild hack off Viljoen to depart for six, DC fans were reminded of their team’s past capitulations in the tournament.

Colin Ingram added crucial runs in the death overs with 19 off nine, but Delhi stuttered losing Ingram and Axar Patel in quick succession. With six off six needed, Sam Curran, KXIP’s hat-trick hero against Delhi in the previous meeting between the two teams failed to recreate the magic as Iyer and debutant Sherfane Rutherford took their team home.

Earlier, Gayle’s 37-ball 69 at the top of the order ensured that Punjab had a solid footing despite a middle-order slump at the notoriously sluggish Kotla track, and eventually ended up with 163/7.

Despite losing their previous game at home against Mumbai Indians failing to get going on a deteriorating track in chase, Delhi’s Iyer opted to bowl with a plethora of changes, including the addition of leg spinner Sandeep Lamichhane.

And it was Lamichhane who made an immediate impact with the wicket of KL Rahul for 12 off nine balls, stumped by Pant in the second over. Gayle though found it relatively easy and relied mostly on his power to clear the ropes hitting Ishant Sharma for a six and a four, before taking apart Lamichhane for four fours in an over.

That burst helped KXIP to 50 runs by the powerplay overs. But, it was only Gayle who enjoyed batting at the Kotla. Mayank Agarwal was undone by a short one from Kagiso Rabada, only to find the leading edge caught by debutant Sherfane Rutherford. David Miller fell to the left-arm spin of Axar Patel, holed out at deep midwicket for seven.

Gayle at the other end smacked Amit Mishra for two sixes in the over to bring up his fifty off just 25 balls. Tidy over from Rabada and Rutherford in the middle, kept KXIP quiet and Lamichhane reaped the reward with the wicket of Gayle, who went failed to time a short one and was caught brilliantly by the combo of Ingram and Axar Patel in a relay effort. Ingram caught the ball at the edge of the long-on boundary, but as in when he lost his footing, he had the presence of mind to throw the ball at Axar, at least 50 yards far out, who completed the catch. In the same over – 13th – Curran was out for duck after handing a simple return catch to the Nepal spinner. 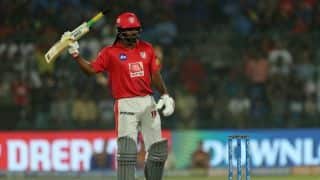 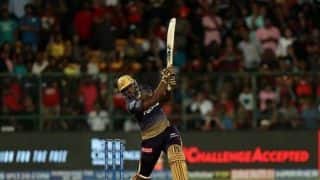