Today’s IPL match is between Rajasthan Royals and Delhi Capitals at the Sawai Mansingh Stadium in Jaipur.

This is the first time that RR and DC are meeting in IPL 2019.

Fresh off their respective wins, both Rajasthan and Delhi would want to maintain the winning momentum.

Here are the talking points ahead of game 40:

Man to man, Delhi have a stronger spin attack in Axar Patel, Amit Mishra and Sandeep Lamichhane. The left-arm spinner Axar has taken eight wickets in six matches while conceding runs at 6.78 per over. Mishra, who last week became the first Indian bowler to claim 150 wickets in the IPL, has four wickets in five games. While his economy is on the higher side at 7.94, his experience counts for plenty.

Nepal legspinner Lamichhane has eight wickets in five games with an economy rate of 8.70, but his wickets have been big: in the win over KXIP he dismissed Chris Gayle, KL Rahul and Sam Curran.

This season, RR have lost 22 wickets to spin which is the most for all teams. Expect DC to play Axar, Mishra and Lamichhane again.

What to do about Prithvi Shaw?

Worryingly, he has not made it out of the Powerplay often enough. Only thrice has not been dismissed inside the first six overs. And of his ten dismissals, three have come to spin.

If Delhi get tired of persisting with Shaw, his former India Under-19 World Cup-winning team-mate Manjot Kalra could be used as an opener.

Time up for Rahane?

Ajinkya Rahane has struggled to dominate this season. In nine innings, he has made 213 runs with a strike-rate of 130.67. Since he stroked his way to 70 off 49 balls in RR’s second game, Rahane has not passed 37 and has been dismissed six times under 26.

Last week, he was removed as captain with the management handing charge to Steve Smith. With Rajasthan’s playoff hopes hanging by a thread, could it be time for the management to swap Rahane for Rahul Tripathi?

Two strikes and out for Turner?

Australian Ashton Turner made his IPL debut in Rajasthan’s match against KXIP and bagged a first-ball duck. With Jos Buttler back in England for the birth of his child, Turner got another opportunity against Mumbai Indians but was again out first ball.

Buttler is unlikely to play this match as well, which leaves RR to decide whether to give Turner a third chance or go back to Englishman Liam Livingstone.

Livingstone has played one match this season, in which he made made one run and concede 13 runs in one wicketless over.

Rajasthan’s bench strength to the fore

Ahead of the imminent departures of Buttler and Ben Stokes for England for the home ODI series they have lined up before the World Cup, the performances of Stuart Binny and young Riyan Parag augurs well for Rajasthan.

Binny has batted twice this season and has made 40 runs at a strike-rate of 266.66, of which 33 came in one unbeaten innings off just 11 balls. His seam bowling has been handy too, as indicated by four overs for 25 runs and one wicket at an economy of 6.25.

Parag, aged 17, made his IPL debut for RR in the last game and impressed with 43 off 29 deliveries in a match-winning stand with Smith.

Struggling to make the IPL playoffs, Rajasthan need more such impact performances from their Indian core to keep the momentum going. 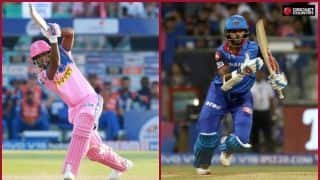 Today's Best Pick 11 for Dream11, My Team11 and Dotball - Here are the best pick for today's match between RR and DC in Jaipur at 8pm