Kohli vented his frustration after a Malinga no-ball was not called in RCB's loss to Mumbai.

Game seven of the 2019 IPL between hosts Royal Challengers Bangalore and Mumbai Indians saw the latter hold out for a six-run win that gave them their first points of the season and left RCB winless after two outings.

No pain, no gain for Chahal

Yuzvendra Chahal has played six seasons of the IPL at the M Chinnaswamy Stadium, a venue traditionally known as a batting paradise because of the flat track and small boundaries. Across those six seasons he’s been hit for a few runs – his economy at the venue was 7.82 before the game – but had also taken a lot of wickets: 49, to be precise. (READ: Fuming Virat Kohli calls umpire s mistake ridiculous )

Up against a strong Mumbai batting lineup, Chahal came on to bowl after Mumbai took 52 off the Powerplay overs. In his opening overs – the seventh of the innings – he dismissed Quinton de Kock and conceded just four runs. In his second, eight runs came.

Chahal was then called on to bowl the 14th over, with Yuvraj Singh on strike. His first three deliveries went into the stands as Yuvraj, batting with tremendous power, clubbed two sixes off the back foot and one straight over the sight-screen. Chahal winced, look at the giant TV screen and chewed on his bubblegum. Back to his mark he went, ambled in and this time tossed the ball up wider outside off stump. It was a googly, which Yuvraj went after and lofted to long-off where Mohammed Siraj took the catch inside the boundary. (READ: Jasprit Bumrah steals a humdinger for Mumbai)

His figures read 3-0-32-2. Chahal bowled his spell by getting Suryakumar Yadav skying a catch to cover and then, after bowling a wide off what should have been his final delivery of the night, had Kieron Pollard miscuing a big slash off the extra ball to finish with 4/38 in his four overs.

Asked about going for runs at the venue afterwards, Chahal smiled and said he didn’t mind because he kept taking wickets there.

Chasing 188, RCB had just lost Parthiv Patel to Mayank Markande. AB de Villiers was the new man in. First ball from Markande, de Villiers stabbed at it off the back foot and got a thick edge to Yuvraj at slip. The ball came to him fast, but a fielder of his calibre should have held onto it.

The drop could have cost Mumbai dearly, for de Villiers threatened to finish the match with 70 not out from 41 balls.

And to think, Jasprit Bumrah was in doubt for this match after injuring himself in Mumbai’s season opener.

Subtract Bumrah’s terrific late-overs bowling display and RCB would have won this match much earlier. After being hit by Virat Kohli for three fours in his first over, Bumrah came back to bowl the 14th and had his man with a bouncer that hurried the RCB captain into a mistimed pull shot that was taken at midwicket. Only three runs came from the over.

Bumrah was held back until the 17th over, and immediately had Shimron Hetmyer slashing a catch to cover. Five dot balls in that exceptional over left RCB to get 40 from 18 balls. On cue, de Villiers hit Hardik Pandya for a four and two sixes, which brought the asking down to 22 from 12. Bumrah again did wonderfully, conceding five runs and dismissing Colin de Grandhomme.

His final figures of 3/20 were gold, and conceding eight runs in his last three overs underlined Bumrah’s quality.

Bangalore needed seven runs to win off the last ball of the game, and six to force a Super Over. Lasith Malinga ran in and hurled a full toss Shivam Dube. The batsman drove the ball down the ground to long-on and Mumbai celebrated a narrow win.

However, subsequent replays on the giant screen showed that Malinga had overstepped. Had the umpire S Ravi spotted the front foot no-ball, Bangalore would have needed six runs off the last ball, which would have been a free hit. And de Villiers would have been on strike.

A fuming Kohli didn’t hide his frustration with Ravi’s call after the game. 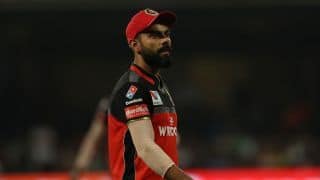