Sandeep Sharma is not your everyday fast bowler. He is neither well-built nor overly aggressive. Soft-spoken but blessed with an uncanny knack of imitating his coaches (a talent he displays only in the dressing room), the 20-year-old turned heads in the UAE leg of Indian premier League (IPL) 2014 with his ability to generate sharp swing. The likes of Chris Gayle, Virat Kohli and Gautam Gambhir will vouch for that.

Bought by Kings XI Punjab (KXIP) for Rs 85 lakh at the auction, Sharma is going great guns in the cash-rich league. With seven scalps in three games, the former India Under-19 player is unarguably one of the finds of this IPL. Mind you, he produced back-to-back man-of-the-match performances against Kolkata Knight Riders (KKR) and Royal Challengers Bangalore (RCB) in the UAE.

“I had a good season, starting with the Ranji Trophy. I focused on working on my swing, backed my strengths and worked on my weaknesses. This has helped me a lot. When I came into the IPL, I got to talk to Viru paaji (Virender Sehwag) who told me to concentrate on swing because it is difficult for any batsman to hit when the ball swings. I did the same and I have been getting the desired results,” Sharma told dna after his team’s practice session at the Wankhede on Friday.

Sharma’s popularity soared when he destroyed a rampaging Gayle’s stumps recently. This after the West Indian took Glenn Maxwell to the cleaners in the previous over. “It was amazing to get his wicket. We have seen him how he murders the bowlers. Obviously, I was under a lot of pressure. Everyone knows Gayle is a legend in this format. My plan was to bowl an away-going ball and, luckily, it swung big time and destroyed his stumps,” he said.

The Patiala-born Sharma, who represents Punjab in the Ranji Trophy, enjoys bowling to left-handers. Why? Because he ends up dishing out that effective away-going delivery. Apart from Gayle, Sharma has dismissed two other southpaws in Gambhir and Parthiv Patel. “The in-swinging delivery is my strength and I enjoy bowling to lefties because it goes out (away). At the same time, I am working on bowling out-swingers to right-handers. Death-bowling is another area I am working on. I don’t want to be a predictable bowler,” he said.

Sharma doesn’t want to remain just a swing bowler. He wants to bowl fast too. “When you swing the ball, batsmen can’t hit out easily. But I know I need to work on my pace too. I was bowling 120-125 kph the Under-19 World Cup in Australia in 2012 (it may be recalled that the Unmukt Chand-led side were crowned champions). Today, you will see I bowl 130 kph. However, my aim is to touch 135 now. Combining swing with pace will help me create trouble for batsman,” he added.

The IPL is a high-pressure tournament as every player has to deliver whenever an opportunity comes by. “There is not much planning and discussion in the Ranji Trophy. But here, it’s different. Here, you have a plan for every batsman and you discuss these things a lot. You are always under pressure; you have to keep performing. It’s about how you handle the pressure and expectations. I look up to the big players for help,” he said.

Apart from tasting big-league cricket, Sharma is also enjoying bowling with Australian fast bowler Mitchell Johnson. Ask him about what lessons he has taken from the Aussie, he says, “Mitchell is a different kind of bowler. I don’t talk to him about bowling. Just only mental aspect. He tells me how to avoid negative thoughts and bowl positively with control.” 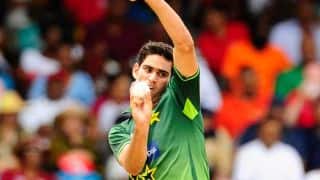 Hammad Azam: I am trying hard to comeback into Pakistan side 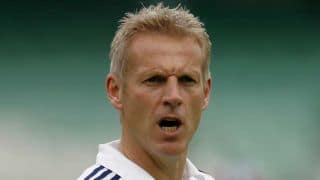