Sodhi's exploits took New Zealand Under-19 team to the Under-19 World Cup semi-final.

Fifteen months ago, Ish Sodhi’s remarkable exploits took the New Zealand Under-19 team to the Under-19 World Cup semi-final.  It was the first time the tall, brawny, herculean leg-spinner captured the attention of the public.  However, his remarkable feat was with the bat rather than the ball.  Needing 18 runs off the last over, Sodhi belted a four, a six and then finally, dispatched the last ball over the midwicket for yet a another boundary to take New Zealand to an unlikely win over the undefeated West Indies.

In the next match against the eventual champions India, it was Sodhi’s combination of top spinners and fast leg-spinners that caught the eye of the public. Sodhi was able to stem the flow of runs but his bowling looked one-dimensional.  He had developed his style by watching his idol, Anil Kumble. First thoughts were that he resembled another spinner from Indian origin and had made his way into the New Zealand team with sheer ability to bowl spin rather than quality spin.

Fifteen months down the track, the inaccurate Sodhi took on the Indian team at Auckland and showed how quickly his bowling has progressed.

During those 15 months, Sodhi had made his Test debut on benign pitches of Bangladesh, toured India with the New Zealand  ‘A’ team, developed a googly. Now, he has a fine stock delivery in leg-break as well. He even went to Melbourne to chat with Shane Warne to learn the tricks of the trade. More importantly, he has the backing of the Test captain, Brendon McCullum and his teammates.

Although the development has been quick,  Sodhi has taken it step at a time. Sodhi’s first tour of India was with New Zealand ‘A’ team in September 2013. Sodhi though, was plundered by the likes of Abhishek Nayar and Vijay Zol on benign pitches.  It was a hard lesson for the young leg-spinner and he realised to prosper, he needed to flight the ball.

It was a wise option, but unfortunately for Sodhi his next challenge was once again in the subcontinent against Sri Lanka ‘A’. A place where leg-spinners can believe in flighting the ball.  Sodhi still impressed by returning with figures of six for 265 with a strike rate of 72. Now, not bad considering his age and the nature of the wickets.

Importantly for Sodhi, the New Zealand selectors had seen his progress and his attitude ensured that he was worth persisting . It was wise move, considering the lack of spinning options in New Zealand and Sodhi’s ability to bowl wrist spin, one of the great arts of cricket.

In the West Indies series at home, Sodhi rarely got a chance to bowl prolonged spells, apart from a one innings due to the fact that West Indian batsmen were bundled out cheaply by the New Zeland seamers far too often.  The eye catching moment for Sodhi was he managed to pick up six wickets and bamboozled the West Indian batsmen with his googly, a delivery he had added to his artillery.

While his accuracy had left a lot to be desired, it was clear that he had plans to dismiss opposition batsmen. He was thinking about his bowling and how to deceive them rather than just bowling at them. Twice he set up the West Indian batsmen, with flighted leg-spinners outside the off-stump and slipping in the googly to trap them on the crease or bowling them through the gate.  Only problem was he seemed to be over reliant on the googly for his wickets, the flighted leg-spinner only seemed like the set up delivery rather than the stock ball.

But perhaps it was his next journey that allowed Sodhi to discover the art of leg-spin. Sodhi received mentoring from none other than Warne.  Although, Sodhi didn’t disclose too much about his session with Warne, it was evident in his brief spell against India at Auckland that Sodhi had bene given tips to rely on his stock delivery, the leg-spinner.

Up against the Indian batsmen, the leg-spinner was delivered time-after-time, the seam was perfect (pointing to first slip), the dip was evident and turn with the bounce was reminiscent of Warne.  In between, there were those long hops, but the priority was to have a sharp leg-spinner.  A couple of times, he went peerlessly close to the outside edge and the bounce he extracted ensured the Indian batsmen had to be careful with the square-cut.  Then after 32 balls of constantly bowling  leg-spinners,  finally he delivered the googly which was picked and played well, but more  importantly, he used the ball as a surprise weapon rather than a prime weapon.

Sodhi’s six overs against India were fascinating to watch and it was a privilege to see a young upcoming wrist spinner in transition. If he can pick up a wicket or two with his leg-spinners, it will be sight to cherish because in the last fifteen months, Ish Sodhi has come a long way. 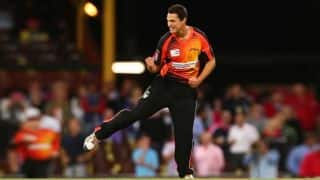