Fresh from his fantastic bowling performances in the recent edition of the BPL 2016, Junaid spoke to PakPassion.net about his recent efforts directed towards yet another comeback.

Junaid Khan is a man on a mission. A fast-bowler by trade with 157 international wickets to his name and nearing 27, Junaid is also blessed with a great amount of optimism which seems to drive him through his career. Optimism and the will to succeed against overwhelming odds must be the only reason why someone with his skills who made an international debut in early 2011 has played only 83 international games so far. Junaid is still hoping for a role in the Pakistan cricket’s future teams.

Fresh from his fantastic bowling performances in the recent edition of the Bangladesh Premier League (BPL) 2016, Junaid spoke to PakPassion.net about his recent efforts directed towards yet another comeback in the Pakistan team, his appreciation of Wasim Akram for his favourable remarks about his recent form and looked forward to being given a chance to represent Pakistan in the shorter formats in the upcoming series in Australia.

Discarded for the 2016 tour of England when most pundits expected him to feature in the high-profile series, Junaid did not wallow in self-pity but busied himself in improving his skills and put them to the test in the 2016 edition of the BPL for Khulna Titans.

In 14 matches, Junaid impressed one and all by picking up 20 wickets and was the second highest wicket-taker behind Dwayne Bravo. This is a record that he thoroughly enjoyed and is proud of as he remarked, I felt I was in good rhythm before the start of this year s edition of the BPL but the feeling of confidence that I got after taking 4 wickets in my opening game was really something else. I suppose the self-belief that one gets after taking wickets makes you feel that no goal is difficult to achieve. In fact, the confidence I feel in myself is very much like what I felt during my international appearances in 2013.

I prepared well ahead of this tournament and worked very hard on the slower one as I know that on Bangladesh pitches such deliveries with variation are crucial for the success of any bowler. Thankfully, it appears that amongst all the bowlers on display in the BPL, Dwayne Bravo s and my slower deliveries proved to be most effective in the tournament. What I am really pleased about is that I took wickets with the new ball and when I came on towards the end of the innings, I was successful with yorkers, as well as with slower and faster bouncers. I bowled with maximum variation and was very successful which is quite pleasing for me.

For many who have followed Junaid sinternational career with interest, the story of his exclusion is a painful one to read but no one can doubt the steely determination in him to continue working hard when many would have fallen off. Indeed his recent BPL performance was in a way a wake-up call for the selectors who have so far ignored him as he noted, To be dropped and discarded from international tours such as the one for England was a very tough for me and I felt very distraught. I was lucky then to have the support of my family as well the media in such trying times. I made up my mind that I would do my utmost to prove and show to the world that I am still capable of bigger things. This is why even when I was not part of the squad bound for England; I was practicing and trying to improve myself. The result of that hard work and determination bore fruit in the manner in which I performed in the BPL.

A startling statistic recently reported on social media indicates that out of the 65 Twenty20s which have been played by Pakistan since Junaid Khan s debut in April 2011, he has played in just 9 games. Whilst the ability to score own goals is not a rarity for Pakistan selectors, the continued exclusion of Junaid remains a mystery to many, including the bowler himself.

Anyone who looks at my domestic record will see that I have one 114n wickets in the T20 format with a more than decent economy rate of around 6.7. My experience is also varied as I have played in Pakistan as well as with counties in England so I suppose shock is one way to describe my feelings on this issue and the fact that I have played such little international cricket is also beyond belief.

So what is the case against Junaid? Apart from the objection that his experience in BPL does not match the pressures one would encounter in international games, there is also the red-herring of fitness which is brought into discussions. Junaid, for his part, is more than happy to refute such negative inferences saying, There are several critics who always look down on the standard of BPL as if it was the same as our domestic tournaments. Let me remind them that apart from the fact that each BPL team has four international players there is the little matter of the rest of team being composed of quality local players. This is the kind of team against which I have performed and ended up as the second highest wicket-taker in the tournament. After all, Mohammad Aamer also made his way back to the Pakistan team on the back of some excellent performances in the last edition of the BPL. And for those worried about my fitness, I am sure they would have noted the fact that I played 14 games within four weeks during this tournament. This type of effort in T20 games requires a lot more energy than what is needed even in Tests.

There is perhaps no better judge of good left-hand fast-bowling talent than Akram. And when the Sultan of Swing recently commented on Junaid s fine recent form, it filled the fast bowler with joy which he could barely hide as he remarked, I would also hope that just like what Wasim Akram tweeted about why I deserved to be selected based upon how well I was bowling with good rhythm and variation, some other legends of the game will also take up my case. I cannot describe how important it is for the self-confidence of any player to be appreciated in such a way by legendary players such as the great Wasim Akram.

Junaid s thoughts are centered around the goal of representing his country. He understands that he needs to perform well and continue performing to regain his place in the national team. While the route to that elusive comeback would be a tortuous one, Junaid is under no illusions about what he must do to make himself noticed by the Pakistan selectors again.

What I really want to do is take part in the National One-Day cup which is starting on the 17th of December and perform well in this important tournament. If all goes to plan there and in the same way as it has done during the BPL, my target and hope is to make a comeback for Pakistan in the T20 and One-Day formats for the upcoming series against Australia. I know that the teams for these formats are yet to be decided and it is my hope that the selectors will pay attention to my recent performances and allow me a chance to represent Pakistan once again. I m fit, confident and ready to play for Pakistan again if selected. 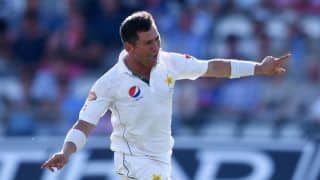