Kieron Pollard and Mitchell Starc grabbed all the headlines on May 6, 2014, in the Indian Premier League (IPL). They had a massive confrontation duringMumbai Indians’ innings at the Wankhede Stadium. Mumbai’s important victory over Royal Challengers Bangalore almost became a sideshow as Pollard and Starc nearly came to blows. Shrikant Shankar writes that this is merely an addendum to the story of ill-tempered recent history between West Indies and Australia.

There have always been confrontations between players on the cricket field. The game of cricket is a non-contact sport, so, when when clashes occur between players, it is often the main topic of discussion. Almost every match has a lot of sledging and banter flying from one end to the other. That is acceptable in moderation. But when a bat flies from one end to the other, then that is most certainly not acceptable. On May 6, 2014, at the Wankhede Stadium, a bat didn’t exactly fly across the air, but it sure did come off the gloves. Kieron Pollard and Mitchell Starc were involved in a high-profile confrontation in the Indian Premier League (IPL) 2014 match between Mumbai Indians and Royal Challengers Bangalore.

Just one delivery before the incident, Starc had bowled a testing bouncer and Pollard missed with an unbalanced hook shot. Unimpressed with the audacity of the shot, Starc sent down a few choice words towards Pollard. In return, Pollard gestured and shooed Starc away. Now, in IPL if any kind of sledging/gamesmanship/banter occurs, Pollard makes sure the next delivery will have to be re-bowled. It does not matter whether he is batting or bowling. If he is bowling, Pollard will come till the run-up and stall. He will go back and re-bowl. If he is batting, Pollard will walk away just at the same time the bowler has begin his bowling stride. It is pure gamesmanship.

Pollard did the same thing and Starc, again and obviously, was not impressed. But, in that fraction of a second, he decided to bowl in the direction of Pollard, who was moving away. Incensed, Pollard began the motion to throw his bat at Starc. But, at the last moment, released the bat when his hand was facing downwards. The bat just fell near the batsman. Looking at the replays, one could imagine that Pollard realised in that fraction of a second of what he was going to do and then decided to throw the bat down rather than towards Starc. Either way, such an incident is not imagined normally when one thinks about confrontations in cricket.

Players may barge into each other while running or aim verbal volleys at one another, but not throw balls and bats at each other. Tensions flared up and both the players had to be separated and cooled down by the umpires and the other players. Though, this was the most high-profile incident, many such player vs player battles had taken place during the course of the match. The Wankhede crowd is known to infuriate the away team. But the Pollard vs Starc incident has a history to it. One could trace the roots of this confrontation from the time James Faulkner had expressed his dislike for West Indies players.

Everyone knows how that ended. But this incident highlights the fact that nothing has ended. Australians don’t like it when they come out in second position in any aspect. There are quite a few players in the current Australian setup who like to showcase their sledging prowess. West Indies players in general don’t get into sledging on a high level. But when taunted, their reactions can be larger than life — Chris Gayle’s aggressive ‘Gangnam Style’ dance in the ICC World T20 2014 being a prime example. Darren Sammy also tweeted on the situation.

#pepsiIPL pollard should show some respect towards the captain @imVkohli I’m sensing a big chase here.

Faulkner’s comments a few weeks ago also have a prelude. On February 6, 2013, at Canberra, the left-arm seamer was fined for his angry outburst towards Gayle after dismissing the West Indies batsman in an ODI. If one can jog their memories back a bit further, then they would remember Gayle and Michael Clarke going hammer and tongs at each other in the ICC Champions Trophy 2006. Shane Warne and Marlon Samuels had a tussle in the Big Bash League (BBL). Gayle and Brad Haddin also were involved in some banter during the BBL. The ICC World T20 2012 semi-final between West Indies and Australia also was a charged up encounter.

Last season in the IPL, Pollard and Shane Watson had a real go at each other at Wankhede Stadium. There is a lot of bad blood between players from West Indies and Australia. What we have seen is that, even when they are not playing for their respective countries, players from the two sides are not afraid to go at each other either verbally or non-verbally. Even the commentators and cricket experts spoke about the ill-tempered history between the two sets of players. Although many liked the passion and will to win between Pollard and Starc, they did admit things got a bit out of hand on that occasion. Harbhajan Singh was also of the same opinion. Though, the Mumbai Indians off-spinner did say some may be surprised that he called the incident a bit overboard considering his colourful history in cricket.

Some type of action could be taken against the players in regards to ethics and laws of the game. There are a lot of West Indies and Australian players in the IPL and many play in same teams. One can be sure that the Kieron Pollard vs Mitchell Starc confrontation is not the last of its kind. This is just an addendum to the story of the ill-tempered recent history between West Indies and Australia. 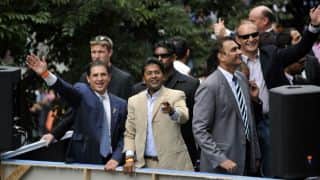