They are the only team to have a handful of players from their home state in this edition of IPL.

With the IPL fever slowly gripping the nation, the spotlight on Indian domestic players has inevitably risen. Shiamak Unwalla looks at the team with the most local players, Kings XI Punjab (KXIP).

The Indian Premier League (IPL) was first pitched as the ideal stage for local Indian talent to play with, and against some of the top players in international cricket. While this has been the case for the most part, there have been moments when local players were sidelined for more lucrative international stars. Just ask Subramaniam Badrinath and Munaf Patel.

When one looks at the team sheets in IPL 2014, what stands out is that most teams look more like a Rest-of-India squad than a local franchise. A team like the Royal Challengers Bangalore (RCB) spent copious amounts of money on some players, but has a grand total of zero Karnataka cricketers. This after the small matter of Karnataka winning the Ranji, Irani and Vijay Hazare trophies. Curiously enough, with Robin Uthappa, Manish Pandey and R Vinay Kumar in their ranks, Kolkata Knight Riders (KKR) actually look a lot more like a side from the IT capital. Oh, and there is only one player from Bengal in the KKR side.

With all this in mind, let us now look at the Kings XI Punjab (KXIP) squad. What sticks out immediately is that they have managed to pick up a lot of local talent. The George Bailey-led side has as many as five players from the Punjab domestic team. Two of their other players play for Himachal Pradesh and Railways respectively, both of which have a very strong connection with the franchise. After all, Dharamshala, which is one of the home grounds of KXIP, is in Himachal Pradesh.

Kings XI retained Manan Vohra, a young and upcoming batsman from Punjab whose temperament and timing impressed a lot of people in the sixth edition of the IPL. Apart from him, Mandeep Singh, Gurkeerat Singh, Harmeet Singh Bansal, and Sandeep Sharma are the other domestic players from Punjab to be picked up by KXIP.

Mandeep was the IPL Under-25 player of the tournament in 2012, and was one of the bright spots on an otherwise disappointing season for KXIP last year. Gurkeerat has been a part of the Kings XI Punjab set-up for a number of years, and has done quite well for them. His outstanding catch to get rid of Ross Taylor in the 2013 edition comes to mind. Harmeet Singh Bansal has been a steady bowler, prone to bowl miserly spells from time to time, first for the Deccan Chargers and now for KXIP. Sandeep Sharma made his IPL debut last year for KXIP and managed a few decent outings, with a best bowling effort of three for 21.

Himachal Pradesh all-rounder Karanveer Singh will be making his IPL debut this year, while Railways medium-pacer Anureet Singh last played in the IPL in 2009 for the Kolkata Knight Riders. Apart from these domestic cricketers, Shaun Marsh has been playing for the KXIP ever since the first edition of the IPL. By this point, he would probably be considered more of a local player than Yuvraj.

In the past, we have seen teams like Rajasthan Royals (RR), Mumbai Indians (MI) and Chennai Super Kings (CSK) build up an aura of impregnability at home. With so much of local flavour and a very strong side on paper, it is quite conceivable that once the IPL shifts to the Indian leg of the tournament, the fan support in home matches might well make them an extremely tough side to beat. 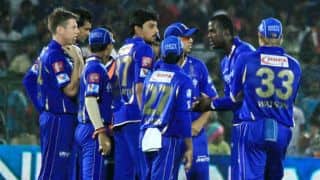