The record-setting allrounder has been part of two IPL franchises - Mumbai Indians and Royal Challengers Bangalore - but has never played a game.

Eleven years of the Indian Premier League have gone by, and the T20 league has changed the landscape of cricket in India and the world. While domestic tournaments still are the conveyor belts that produce talent, the IPL has turned out to be the best platform for these talents to make their mark; not just for Indian cricketers, but internationals as well.

Many have made their careers building on good performances in the IPL, while others have had their 15 minutes of fame. There are a few, however, who despite stacking up the numbers in abundance at the domestic level, have not had to opportunity to showcase their talent in the IPL.

Jalaj Saxena, winner of the best allrounder award multiple times in Indian domestic cricket, has been part of two IPL franchises – Mumbai Indians and Royal Challengers Bangalore – but has never played an IPL match. He had entered his name in the IPL auctions last two times, but went unsold, despite having a base price of Rs 20 lakhs.

Saxena wonders if getting noticed in the IPL is the one shot he has left at attracting the attention of the national selectors.

During my off-seasons I work hard on all three formats of the game and prepare myself (for IPL), but it has not worked out for me so far, he tells CricketCountry. I will keep continuing this. Similar to how playing for India is a dream, I think playing in the IPL is also a dream for me. It is not about expectations, as I know these things are not in my control, I can just prepare myself and be ready.”

Saxena, who represented Mumbai Indians in three qualifying matches in the Champions League T20 in 2014-15, has over the past six Ranji Trophy seasons scored 3621 runs and taken 204 wickets in 58 matches. In that time, he has played for India A six times.

Incidentally, India A begin their tour of New Zealand today, while the senior team has arrived in Australia, but for Saxena the grind of first class-cricket continues.

Shahbaz Nadeem, the Jharkhand spinner – another consistent performer at the Ranji level over the years – finally got his due when he earned a maiden call-up to the Indian T20I team for the recent West Indies series. In the 2018-19 Vijay Hazare Trophy, Nadeem recorded the best figures in the history of List A cricket when he claimed 10-4-10-8 against Rajasthan. Roughly a month later, he got an India call.

On Thursday, Saxena too recorded a rather unique feat against Andhra in Kerala s nine-wicket win in the Ranji Trophy. He scored 133 and claimed nine wickets in a match, including a career-best 8/45 in the second innings, thus becoming the only player in Ranji Trophy history to score a century and claim an eight-wicket haul in an innings in a single match on two occasions. This put Saxena in the elite company of the likes of WG Grace, Frank Tarrant and Frank Woolley to achieve this rare double in first-class cricket.

Could this rare double also lead to a chance at representing India?

I honestly don t know if these records matter,” says Saxena, “because I have set three such records now in the past two years. I took the [second] best match haul of 16 wickets in a match last year, I scored the most runs in a match taking 10 wickets and now this century and eight wickets. So, I don t know if it means anything. I don t think about these things much, either. I think of things that is in my control. For me contributing to the team s cause is important and that is where my focus is.”

In 2015, while playing for Madhya Pradesh, Saxena became the holder of the best figures in a match for his state claiming 16/154 against Railways. The figures are also the joint second best in Ranji Trophy history, level with Pradeep Sundaram s 16/154 for Rajasthan vs Vidarbha in 1985-86. Anil Kumble holds the best match figures in the competition taking 16/99 against Kerala in 1994-95.

In 2017-18 against Rajasthan, Saxena took 10/147 to go with scores of 79 and an unbeaten 105, the first time he scored a century and claimed an eight-wicket haul. His combined score of 184 runs is the highest for a batsman who also took ten or more wickets in a Ranji match – also the first player to do so in the competition’s history. 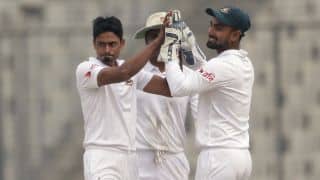